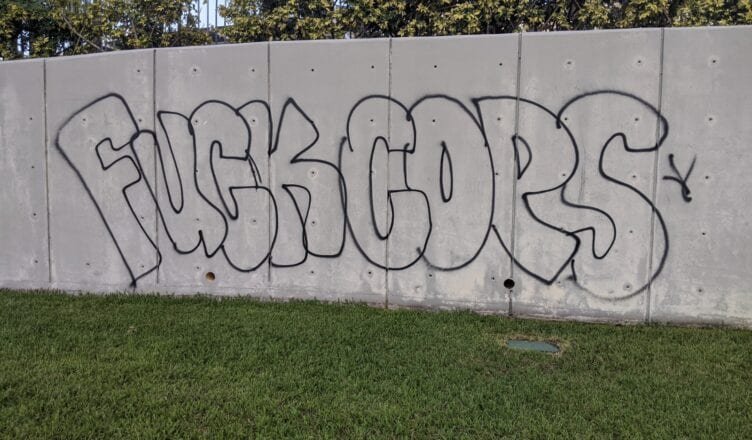 May 30th, 2020. Miami’s peaceful BlackLivesMatter protests in honor of  the death of George Floyd in Minnesota turned into the worst riots in 40 years, almost to the day of the McDuffie race riots in Overtown. Here’s what happened from the start in the 2020 Miami protests.

About 1,000 protesters gathered at the Freedom Torch near Bayside Marketplace for peaceful protests, a moment of silence, an open mic of sorts for anyone who wanted to speak via megaphone. There was camaraderie and legitimate good vibes and then movement.

A walk began up Biscayne Boulevard with many people, mostly young, carrying signs of protest and unity and social justice.

Good vibes, again well organized. The protest marched up and then west towards the Miami police department on NW 2nd Avenue, where there is also an entrance to I 95 at 8th street. About 1,000 people walked onto I 95 and shut down the Interstate for thirty minutes.

Thousands shut down #I95 in #Miamiprotest, moving towards police station on NW 2nd then to Bayfront Park https://t.co/WphBJ63YhS pic.twitter.com/P3MVYPy3dK

Chants throughout the 2020 Miami protests included “No Justice, No Peace, No Racist Police,” “Black Lives Matter,” “George Floyd,” “Unity and Strength,” and “Hold Each Other Accountable.”

Chants of “Unity & Strength” on #I95 in #Miamiprotest — zero incidents of violence, arrests, or property damage… #GeorgeFloydProtests pic.twitter.com/POC48FZoNX

The protest left I 95 and walked back towards Bayside Marketplace and the Freedom Torch, passing the police headquarters. The police began to mobilize more, on bikes, in gear, on the roof. They pushed the crowd along, gently and without incident.

Chants of “No Justice No Peace, Fuck the Police” in #Miamiprotest as crowd moves away from Police HQ towards Freedom Torch in Downtown #Miami pic.twitter.com/0ZD8dgvSvW

The protest went back to Bayside Marketplace but not for long.

The 2020 Miami protests moved back towards the police headquarters. There were still about 1,000 people. Things began to change as the sun began to set. Protesters began to damage property on the way.

Outside the police headquarters, the tension built.

Protesters threw bottles and rocks at the police and their headquarters. Protesters set off fireworks and smoke bombs, causing false panic among the protesters.

A police officer sat like a sniper and began to shoot at people with rubber bullets. And then almost at once the tear gas began to rain by the cops and a police car was set afire by the protesters.

#Miamiprotest turning into a riot. Outside police HQ, not a retail not a residential area #GeorgeFloydProtests #riots2020 pic.twitter.com/nPGQmwQRbD

About 60% of the protesters went home, which left around 400 people near the police headquarters. It was a cat and mouse game of protesters throwing objects at the cops and their building, and the police launching tear gas into the crowd. More people dispersed, many went home, some headed back towards Bayside Marketplace.

The cops began to gear up like crazy prepared for craziness and violence near the police headquarters. Three cop cars were on fire.

Things you hear in a riot, not kidding, “I got gas for sale.” #MIAMIPROTEST #riots2020 pic.twitter.com/KOaPl0QztJ

Protesters enter Bayside Marketplace mall. There are many people there, eating, shopping, as the mall just reopened. Then, the sound of glass breaking filled the air, many non-looter protesters ran out of Bayside, while others stayed looting, mainly at Foot Locker. As the looters left, the cops came in full force, but missed the looters.

The protesters head west back towards the police station. At this point there are maybe 200 people remaining protesting.

The media linger around Bayside trying to figure out what happened at Bayside.

At this point, the protest was definitely over. It was strictly a riot and there weren’t that many people. There was no need to stay.

That is all we can report.

We can say the total damage was bad but not that bad proportionately. No one was seriously hurt. No one killed. If arrests were made, we didn’t see one up to 10:30pm, a time at which the city of Miami issued a curfew.

The damage was limited to three police cars being burned, Foot Locker and one or two unconfirmed stores looted, tons of graffiti and knocked over garbage’s and smashed signs.

Not all that much different than a Tropical Storm.