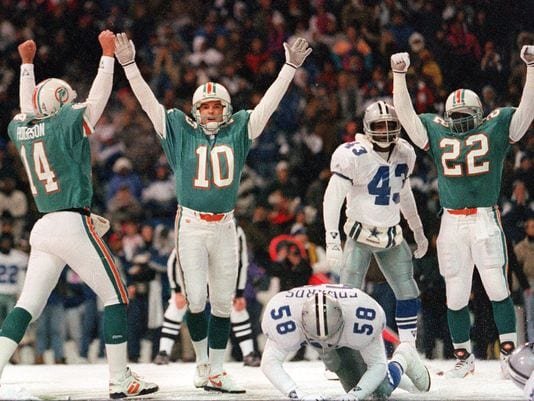 Many of you weren’t born. But if you were of age and a Dolphins fan you remember exactly where you were  on that Thanksgiving 25 years ago.

The Miami Dolphins remarkably went into that game against the reigning Super Bowl champs, The Dallas Cowboys. at 8-2 with the best record in the NFL. Remarkable, because 5 games into The Dolphins’ season, all-pro quarterback Dan Marino tore his Achilles tendon and was out for the year. Back-up Scott Mitchell played well, but was out for the Thanksgiving game as well. Miami was down to their third stringer, 39-year old Steve DeBerg versus hall-of-famers like Troy Aikman, Michael Irvin, and Emmitt Smith.

But snow was the great equalizer that day. The field was covered in it, keeping the game close for both teams unused to playing in the snow. Keith Byers had a remarkable 77 yard touchdown run for The Dolphins in the first quarter. Dallas responded in the second quarter with a pair of touchdowns in the second quarter including a spectacular punt return by Kevin Williams where he used the ice to slide into the end zone.

All the scoring in the second half came from Dolphins’ field goals by Pete Stoyanovich. With a few seconds left and the Dolphins down by a point at 14-13, he lined up for a 41 yard field goal. In these elements it wasn’t a sure thing, even by one of the best kickers in the league.

Sure enough the Cowboys blocked the kick. The city of Miami was in despair. But all of a sudden there was pandemonium on the field. Turned out Cowboys defender Leon Lett tried to pick up the icy ball for some inexplicable reason. A Dolphins player recovered it and Stoyanovich was given a second chance at a much more manageable 19 yard field goal with three seconds left. This kick was good and time expired as the ball cleared the uprights.

It was a wonderful Thanksgiving in Miami.

Sadly the game didn’t matter much in the larger scheme of things. Despite leaving Dallas with the NFL’s best record The Dolphins lost their next 5 games to miss the playoffs. Meanwhile The Cowboys won their next eight games and won the Super Bowl for the second year in a row.

But in the really grand scheme of things reminiscing about that Thanksgiving in 1993 where everything tasted so much better due to that amazing win is as good as it gets.