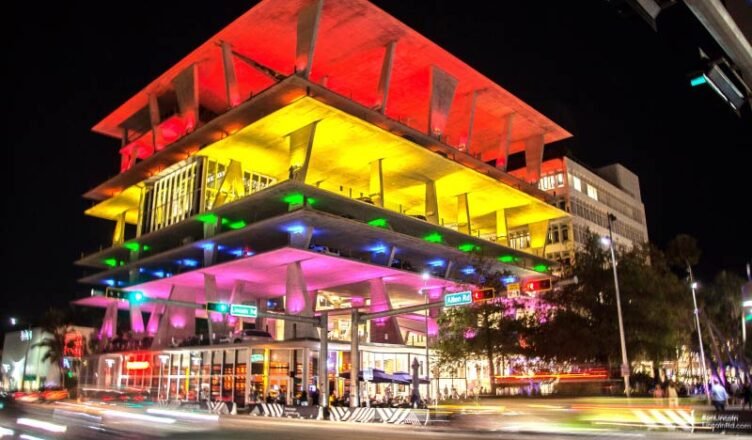 One of our fellow Jitney drivers already reviewed 7 Deadly Sins on opening night, but since there is not much else happening culturally, we are reviewing it again. This time with a bit more flare.

7 Deadly Sins is a play currently running in Miami. Literally the only show in town, the production is a series of short plays performed inside vacant storefronts on Lincoln Road. The actors are behind glass. Most of the stores / sets are near Alton Road, between Doraku and the movie theater.

The concept is awesome. The audience sits outside, socially distanced, masked (annoying at times) listening to the actors with headphones that plug into a weird antiquated I-pod type of device.

Meanwhile, the rest of the world is happening around you on Lincoln Road. This is cool but also annoying because you hear loud Miami cars and motorcycles roaring, conversations from the bar, neighboring restaurants, city lights and more distractions.

The distraction is amplified by the poor sound quality of many of the pods and the cheap headphones they provide you. Definitely bring your own headphones if you go. And you should go.

Quirks and distractions aside, it’s a wonderful night out, unique experience and overall, pretty good theater.

There are 8 experiences or plays: two are really, really good, two good, two so-so, and two, quite honestly, just sucked.

As always on The Jitney, we talk to other audience members so as to base our reviews not only on our own opinion, but also others, as well as obvious indicators, like level of applause or lack of.

unfortunately was one of the plays that sucked. It felt discombobulated, choppy, confusing. It was more creepy than sexy, needlessly violent and it ended abruptly.

was oddly cerebral & psychological, rather than outwardly social commentary, or lambasting. We were not quite sure what the character was angry about. Character seemed more sad than angry.

felt organized, clear, concise, and structured. Great characters and acting. The setting suburb. The dialogue rich and crisp. This was an abundance of riches for short theater.

was so musically in tune and wonderful. The setting amazing, richly topical, political, timely, great acting and a nail on the zeitgeist.

was creative, weird, unique, timely, conceptually great (a Confederate statue delivering a monologue) but oddly not well written. It was a little hard to follow but full disclosure, missed beginning stuck in purgatory shooting oyster shots at the bar.

7 out of 7 sins on the oyster shots

was the weirdest freaking set you’ll ever experience. Just a gonzo concept. The play? Meh. It’s oxymoronic: intimate yet awkward, real yet artificial, complete yet incomplete, sexy but also clumsy.

In conclusion, you should 100% go. If you drink, Uber or Lyft. The play runs from Thursday to Sunday, now ending January 17th, it was extended because it’s a success. Many of the shows sell out.

You can buy tickets here. And if you go Thursday or Sunday use promo code MIAMIARTS for 10% off at purchase.