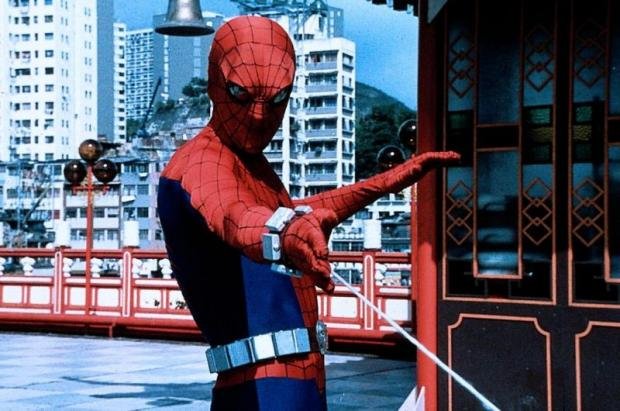 Editor’s Note: Spider-man:Into the Spider-Verse is one of the best reviewed movies of the year outside of Paddington 2.  Below our movie critic explains why everyone is wrong.

Spider-Man: Into the Spider-Verse is a visual marvel. Inventive and colorful, clever and funny, it’s clear a lot of effort from a lot of talented people went into the animated movie. Why, then, was I so bored during much of it?

Taking place in a mirror universe only slightly different from our own–instead of NYPD, the police here are PDNY,–and separate from the Marvel live-action movies like last year’s Spider-Man: Homecoming, Into the Spider-Verse is the origin story of Miles Morales, a young Brooklynite who’s bitten by the same radioactive spider that turned Peter Parker into Spider-Man, the web-slinging superhero.

The plot kicks into gear when Miles stumbles upon Spider-Man  battling the evil Kingpin, whose giant, hulking frame, in an inspired visual motif, fills the entire screen like a black square. Kingpin is trying to open portals to other universes. His motivations for this are clearly presented, though awkwardly jammed into a random moment in the movie. I can’t quite decide if it’s elegant or half-assed. Either way, his meddling accidentally brings a number of Spider-People from different universes into Miles’ world. Young and not able to control his newfound powers, Miles latches on to one of these alternate dimension heroes, a middle aged, paunchy version of Peter Parker, who’s going through a mid-life crisis when he’s pulled out of his world and forced to be a reluctant mentor.

With Kingpin’s dimensional device creating massive earthquakes underneath New York with every use, and with the accidental visitors facing a painful death if they remain in a universe not their own, Miles teams up with the other Spider heroes to defeat the supervillain and return his newfound friends to their own worlds. Among his new teammates: Spider-Gwen, an alternate universe Gwen Stacy bitten by a radioactive spider in her timeline instead of Peter; Spider-Man: Noir, a hard-boiled detective version of Spider-Man, always in black and white whose backstory and powers, beyond the traditional web-slinging, are anything but clear; if Noir’s character is unclear, wait until Peni Parker shows up. Clearly anime inspired, she has a robot counterpart powered by a radioactive spider that is also infused with her father’s spirit…I think, her backstory is also barely a blip; last is Spider-Ham, a Loony Tunes-esque, anthropomorphic pig version of Spider-Man.

With that storyline and assorted bunch of wild characters, Into the Spider-Verse is definitely not hiding its comic-book roots. The film’s style makes that connection even clearer. Clichéd as it sounds, it really is a comic book come to life. The colors are vibrant and alive. A sheen of printing dots even lightly shades the images. The action is often framed like panels, and word balloons, sound-effects, and inner monologue (written into stark yellow squares, of course) all sporadically appear, floating around the characters. It’s a lively and bold aesthetic that pays perfect tribute to its source material.

Miles Morales is a little different from a usual superhero.

He’s into graffiti (a spray paint style is also neatly folded into the film’s visuals), he listens to hip-hop, which soundtracks the movie (gotta love classic Biggie tracks dropping in a Spider-Man movie), and he’s the son of an African American father and a Puerto Rican mother, with him switching easily between English and Spanish throughout.

All this is impressive, at first. But when the eye-dazzling coolness wears off, which it naturally must, the script and the characters have to kick in to buoy interest, and that’s where the film ultimately lost me. Boiled down, the movie is just another origin story where the hero doubts himself endlessly and can’t control his powers until the very end, when he finally puts on the iconic suit that fans know from the comics. True, Miles’ journey through superhero training 101 isn’t mindless. Jokes are plentiful and often funny, and the reinterpretations of some of the classic villains from the comics are impressive. I especially dug this Doc Ock’s plastic tentacles that have a flexible, tactile quality not seen before on the character. And some of the action sequences are inspired, like a chase through an autumn, snow covered forest. But the pacing is slack. The opening thirty minutes or so first seem like patient table setting, letting us get to know the characters, but soon comes off as wasting time. When Miles finally is bitten by the spider, I couldn’t believe it hadn’t happened at least 10 minutes earlier.

That slack pacing takes its toll on the myriad characters that show up. You have these potentially cool Spider-powered super heroes, but they arrive far too late and do far too little when they finally appear, barely even interacting with one another. One character exclaims a love for his new friends late in the movie, but that sentiment and the emotion behind it is not remotely earned.

I’m still giving Spider-Man: Into the Spider-Verse a recommendation. It’s a visually bold, funny movie with energetic cinematography that doesn’t get bogged down in the dark and dreary like some superhero movies tend to. But that energy is sadly lacking from the core story. It’s certainly a pretty movie, but also a little dull.