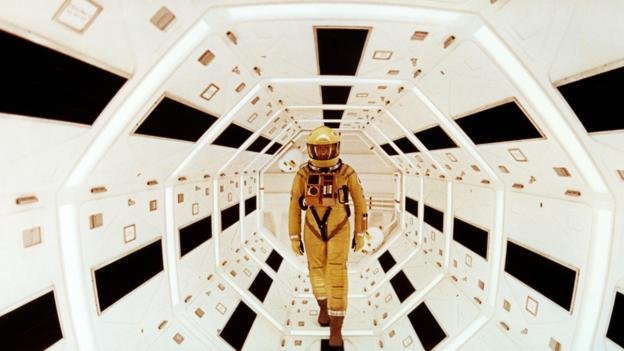 When a heady science fiction film comes out, I wait for it, like waiting for the bass drop in a dance tune: the inevitable comparison to 2001: A Space Odyssey. Yes, Ad Astra, the new science fiction adventure starring Brad Pitt, has shades of that seminal film. Luckily, though, it is no mere pastiche, standing firmly on its own two feet. A gorgeous spectacle that speaks to our brains as much as it does to our adrenaline pumping hearts, Ad Astra is a fantastic science fiction film and one of the year’s best movies.

In the near future, man colonizes space. Stations are built on the moon and on Mars, but the push into our solar system ends at the angry red planet after a failed mission to Neptune. Years later, strange energy bursts emit from deep space causing deadly surges on earth. In a spectacular opening sequence, one of those surges almost kills the film’s protagonist, astronaut Roy McBride (Brad Pitt), while performing routine maintenance on a massive communications antenna that scrapes the edge of earth’s atmosphere. The surge causes explosions that send Roy spiraling through the sky, with the whirling visuals, especially on an IMAX screen, thrusting you into every queasy moment of Roy’s unexpected descent to earth.

What follows is a visually sumptuous Heart of Darkness-esque adventure that hops from the moon to Mars to Neptune’s orbit. Cinematographer Hoyte Van Hoytema and composer Max Richter bring the film’s sights and sounds to life. The colors pop: bright oranges tempered by cool blues inside a spaceship, sickly dusty browns of Mars usurping all other hues; these colors buoy marvelous sights like the earth hovering over the moon’s horizon, or sparks flowing over Roy’s spacesuit while he’s standing under a soon to ignite rocket engine. Meanwhile, Max Richter’s soundtrack stuns. Mysterious, propulsive, immediate, the score suggests the beauty and danger of space all at once.

Director James Gray uses these sights and sounds in service of a thoughtful script, showing the same flair for the enigmatic, the visceral, and the psychological here as he did in his last film, the unjustly overlooked The Lost City of Z. Even more so than that film, Ad Astra is as much a muscular adventure as it is a heady philosophical journey. With tight pacing and editing  that manages to somehow retain a dreamy tone and feel, the movie punctures its introspectiveness– complete with Terence Malik (or Apocalypse Now) like voice-over conveying Roy’s thoughts and ruminations on his mental and physical isolation– with effective action and suspense.

While that dreamy tone harkens to the aforementioned 2001, it ultimately presents an entirely different film. Where Stanley Kubrick’s masterpiece trafficked in the puzzling and mystifying, Ad Astra is a more grounded experience, less bound to the ethereal and more to the tangible. Both films look to the skies for answers, but Ad Astra finds them in ourselves, in humanity, in our capacity to love and our potential to forgive. And Brad Pitt with his stoic but magnetic presence proves a perfect prism through which to address these themes.

While dark and existential, there’s hope and light in the end, but not in ways you might expect: Looking directly into the void, the movie dares to find beauty in it. What we’re left with is bracingly honest–If you have a strained relationship with your dad, this might hit a little too close to home–yet emotional picture, that never dips into mawkishness. Ad Astra is a perfect balancing act that, indeed, takes you to the stars.

Deeply silly but entertaining, the feature length version of Downton Abbey turns out to be a concoction that should appeal to fans of the show while offering little to the uninitiated.

The movie’s inciting incident justifies the grandeur of a motion picture: King George V and his wife Queen Mary, on a tour of Yorkshire in 1927, plan to stop for a night at the titular estate. All the characters that we know from the show, the aristocratic residents, the Crawleys, and their loyal servants go atwitter, getting the house ready for the momentous visit and all the drama that inevitably comes with it, including but not limited to a parade and a grand ball.

The servants work feverishly in the kitchens and on the grounds, while the aristocrats lounge in their exquisite drawing rooms drinking tea, exclaiming with long, drawn out sighs how much work they still have to do. Thing is, I don’t think the show’s creator, Julian Fellows, who returns to script here, juxtaposes these scenes ironically. We’re supposed to believe these uppercrusters are as stressed and overworked as their servants. Like I said, silly.

That Laissez-faire attitude permeates the film. The plot, such as it is, ends up a loose collection of events that play out episodically, agreeably, and without much fanfare. Sometimes, hilariously so. An assassination attempt is given about as much weight as the drama surrounding a missing ball gown.

I can’t imagine a Downton Abbey noob getting much out of the movie. This one’s for the fans, a victory lap that gives the actors one more chance to play their memorable characters and their ardent admirers one more chance to hang out with them. Without knowledge of the TV show, though, these characters will just be a parade of vaguely pleasant faces and personalities floating past the camera. If you knew nothing about them before, you certainly won’t learn anything about them here. And even fans of the show might be disappointed to see major characters shunted to the background, allowed only a few reaction lines while adding little else to the proceedings.

There isn’t much at stake in the movie, and that’s just fine with me. The show was at its best when it just hung out with its characters and didn’t try to pump up the drama, so I was glad to find the movie to be mostly in that laid-back mode. Downton Abbey is a hang out movie, a relaxed epilogue that’s sweetly inconsequential. If you’re a fan, grab a cup of tea, thrust your pinkies out, and enjoy.