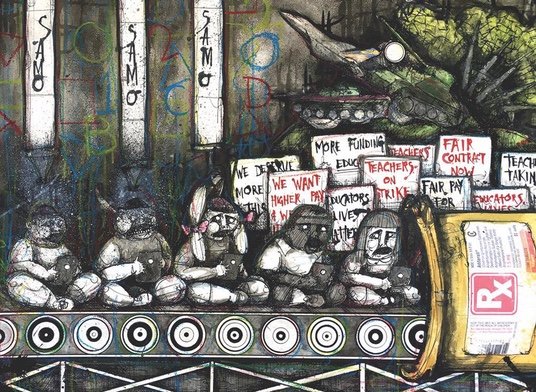 Cities across America, for better or worse, have catchphrases. “The City That Never Sleeps.” “Keep Austin Weird.” “What Happens in Vegas stays in Vegas.” They have different origins — a writer’s description, a critique of overdevelopment, an ad campaign — and based on the latest county marketing efforts here in the Palm Beaches, it has clearly Been Decided that this region needs a tagline of its own.

Whether or not the winning entry — “The Original, The One, The Only” — will resonate past the next marketing cycle is tough to know. But we’ll posit that especially in the county’s urban core, in the city of West Palm Beach, there is a peculiar local energy that exists nowhere else and has to be experienced to be understood.

One person contributing to that sense of a small city with a bigger, grittier city’s vibe is Adam Sheetz. If you haven’t yet met the 30-year-old self taught artist, musician and graphic designer, you have probably seen his work. Sheetz’s prints are seemingly everywhere in multiple forms: building renderings, gig posters, album art, wall murals, holiday ornaments. Papering and decorating West Palm since his early 20s, he’s helped to give it a low-key electric grunge aesthetic that’s hard to capture in a slogan.

Sheetz started making a mark on his surroundings doing design and decor for a local restaurant group — wall finishes, artwork, table tops, light fixtures, chair fabrics, branding and menu designs. On the side he sang and played guitar in a local rock duo, the GutterTones. After about a decade of commercial art and design, he said, “I had reached a point where I felt I had plateaued as a designer, and knew it was time to take the leap and go out on my own.”

He opened a boutique agency, No 9 Creative, in West Palm Beach in the midst of the pandemic. It offers bespoke branding, typeface design, illustration, print and packaging, environmental design and digital campaigns. Launched in November of 2020, the firm through its name and stylized numerical logo references elements of Sheetz’s own life and philosophy. As a youthful baseball player he wore the number 9. The circular crown suggests a cycle — the completion of one phase and the beginning of another. The lightning bolt stem declares his design style clean, controlled chaos.

A phrase usually attributed to Pablo Picasso goes, “Learn the rules like a pro so you can break them like an artist.” There is plenty of this earned rule-breaking in Sheetz’s own work. He draws inspiration from experimentalists such as Picasso, Andy Warhol and Jean-Michel Basquiat, and binds it to the guiding influence of his three favorite designers: Paula Scher, Neville Brody and David Carson. The result, as seen around the corridors and byways of West Palm Beach, is work that captures and defines an  attitudinal, creative poise.

Being a musician as well as an artist, it makes sense that his repertoire extends to gig posters. He’s illustrated area concert dates by artists including Jack White, Amigo the Devil, Bodysnatcher, Koffin Kats, Madball NYC and Teenage Bottlerocket. Regulars at Respectable Street and at weekly events on Clematis Street are often viewing Sheetz’s work, possibly without even knowing it. He’s left a trail of creative expression down the 500 Block, having designed Respectable’s Camp Trashfire graphics, painted Halloween playmate zombies on the doors of Lost Weekend, and produced the renderings for Lost Weekend’s new neighbor, The Hacienda.

While his street art travels, and his design firm thrives, Sheetz is also taking on a more direct role in promoting arts and culture in West Palm Beach. With photographer Bryon Miller, Sheetz is a co-owner of Studio 6 at The Peach, a gallery row occupying a set of converted garage bays in West Palm’s older  industrial fringe. Their hangar hosts film screenings, performances, exhibitions and talks by visiting artists from across the country, and more. If the region is going to live up to its shiny new catchphrase, or graduate to an even better one, it may be thanks to efforts like these.