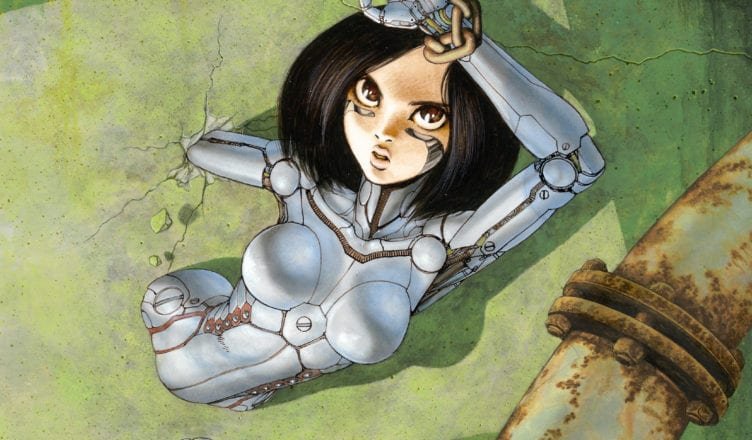 Nearly 20 years ago James Cameron announced his intentions to adapt Battle Angel Alita, the Japanese cyber-punk manga comic book, into a live action film. Almost two decades later, after many false starts and stops, we finally get that adaptation, except now it’s called Alita: Battle Angel and it’s directed by Robert Rodriguez of El Mariachi  and Sin City fame (Cameron still produced and co-wrote the screenplay). Overlong, underdeveloped, and far south of exciting, Alita was definitely not worth the wait.

It’s hard to even describe the film’s plot. It’s less a narrative than a loose collection of occurrences. There’s nothing driving the story forward, no conclusion the film is moving toward. Probably deriving more than it should from the manga it’s based on, Alita is episodic, and those episodes aren’t terribly interesting.

The futuristic story takes place in 2563 after a whole series of “afters”: 300 years after humanity has built giant, gleaming utopias hovering close to the earth; after a majority of them have fallen; after a civil war. And so on. One floating city, Zalem, remains, and so too does the status quo. The dilapidated earth below Zalem is still its garbage receptacle. This backstory is supposed to be mysterious, but comes off muddled instead. Who built these cities? Who lived/lives in them? Why did all but one fall? And, most importantly, why has nothing changed, with earth’s population still solely serving the needs of Zalem? Don’t expect any answers because, oh joy, Alita is yet another first part in a what feel like an unending parade of planned trilogies clogging up our movie theaters.

The story proper begins with Dr. Dyson Ido (Christoph Waltz, looking tired and uninterested), plundering one of the many garbage dumps of Iron City, the rotting remains of a metropolis directly underneath Zalem. He’s scrounging for robot parts to help fix up the many cyber-denizens, half-human half-robots (some more latter than former) of Iron City. He comes across the discarded torso of a robot-woman, and before the opening credits are finished, rebuilds her. Reborn is the titular Alita (Rosa Salazar). Alita’s memory has been wiped. She’s curious, bubbly and childlike, but soon shows a deadlier side. Under the guidance of father-figure Ido, Alita attempts to learn who/what she is and how she ended up in that dump (don’t get your hopes up. Trilogy, remember). On her journey she befriends Hugo (Keean Johnson), a love interest with a dark secret, and deals with Chiren (Jennifer Connelly, looking tired and uninterested), cyber-specialist, and Ido’s ex, who’s connected to smooth crime-lord, Vector (Mahershala Ali, looking…tired and uninterested), who’s also working for a mysterious puppet-master villain up in Zalem who wants to destroy Alita because…I have absolutely no idea.
Story telling is not the film’s strong point. Neither is world building. And acting? Three Oscar winners fill out three of the film’s major roles, but they’re given nothing to do, so they’re either flat and monotonous, or they fall back on shtick. Ali, for example, constantly sucks in air through pursed lips, pauses, and then slithers every line of dialogue like he’s pooping silk. The only person who seems to be having fun is Salazar, who’s lively and effusive as Alita, though her constant grinning and child-like wonder also get old quick.

So is anything good? The effects (by famous special effects houses like WETA and Digital Domain, et al) are impressive. The cybernetic people are especially well-realized, some with convincing robotic arms and legs, others whole robotic bodies with maybe a human head somewhere in there. And Alita herself, who is a motion-captured CGI creation based on Rosa Salazar’s performance, doesn’t hit the uncanny valley (that point where something artificial looks human but somehow, creepily, does not), disconcertingly huge anime eyes and all, as much as I thought she would.

But not much else in the film is as visually arresting as the cyborgs. The dilapidated city, husk-like and brown, never becomes a character like, say, the futuristic dystopias in Blade Runner and its sequel. And in an odd move, the costumes look like regular clothes you’d find people wearing today, a lot of stripes and plaids, polos. Everybody looks like a tourist in their own world, like every day is lazy Sunday. The intent may be to make the future more down to earth, relatable. Instead, it just looks like the costume designer took the day off.

By the third act, when it feels like the movie should be wrapping things up, it just keeps going and going, absent-mindedly, like a lethargic Energizer bunny. Once it’s finally over, you realize why, because the movie has nowhere to go. And we’re supposed to be excited for two more of these? Please.