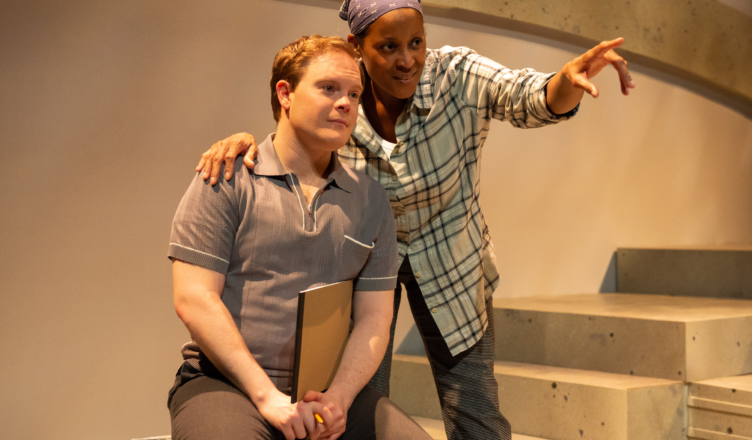 World premiere plays are a staple of a thriving city. Here in Miami, we are lucky (and big) enough to encounter a world premier every now and then. Michael McKeever’s American Rhapsody, directed by Stuart Meltzer and produced by Zoetic Stage, is the latest gem to be deposited among our regional mines. And they’ve struck gold.

Epic in scope, vast in vision, American Rhapsody unfolds as a parallel narrative across several generations of one Kansas family, the Cabot’s. Starting in 1969 with the astronauts of Apollo 11 landing on the moon, we travel eighty-plus years across landmark occasions (9/11, the 2008 financial crisis, COVID-19, to name a few of many) into the year 2032.

Franky Cabot, one of our narrators, is a gay, conservative poet in pursuit of exploring America.  His parents (Big Frank and Eleanor) run the sunflower family farm in Kansas. Jenny, his older sister, is a feminist expelled from Wesleyan who grows into a prominent Manhattan lawyer. Her husband Albert is dealing with PTSD from the Iraq War. Their daughter Maddie (she has a big future) is drawn to Nat Morris, Franky’s best friend, a free-spirited and feisty lesbian New York bartender.

Like any parallel narrative, there are many threads to follow. Add in an 80-year timeline draped in American history, the task is challenging to navigate.

This was not an easy play to write.

In Act I, the characters lacked emotion in regards to each other as their own destinies unfolded across this vast tapestry. For example, Dad died and that sucks but no one seems sad because we have to get back on our own narrative train heading towards the next landmark event in the future.

Act I is still entertaining for the audience. The characters develop fast. And we feel nostalgia traveling into our own memories of these bygone days.

But in Act II, American Rhapsody really comes together. The threads of each narrative weave into each other. A stitch of emotion forms, and the characters react. As we travel into the future the stitches build, eventually folding this play into a warm blanket that covers all of the characters, the story’s plot and the audience’s feelings.

Rhapsody is a bold word to use.

Without revealing spoilers, American Rhapsody achieves a scope worthy of its name.

The play ran 145 minutes. It did not feel like that long. When it ended, there was a deserved standing ovation because American Rhapsody is a true crowd pleaser.