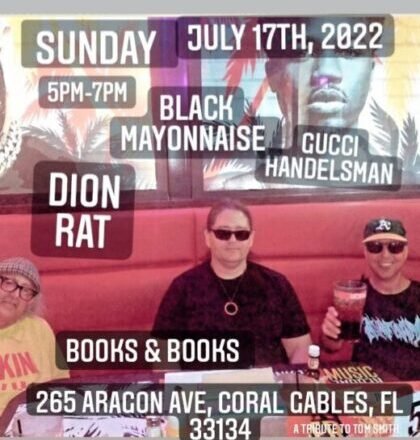 Dearly beloved, we are gathered here today to mourn the loss of Babylon Sisters: Churchill’s Pub and Las Rosas. They were like San Francisco and Los Angeles to me: both so beautiful in their own way, while burning fires and earthquakes rocked the outer rims of their metropolis.

The dire situation leaves one new venue for hardcore-experimental-noise-artists to perform in Miami-Dade County: Mt. Crowley. The first show at this underground space was the International Noise Conference kickoff back in late January 2022. Since then, they have had 305 Fest, 420 Fest, Book of the Law Feast, and plenty more.

Our Great Leader, Rat Bastard spoke with confident authority and crazy hand gestures as he set up his Sunn Stagehand 212 amplification system. We stood under a canopy just outside the barn as Black Mayonnaise finished off a sick set.

“I am the mascot of Churchill’s!” Rat Bastard exclaimed, “That’s why they want me involved…but I don’t wanna be involved anymore…listen man, come by my warehouse… The New Churchill’s of Opa-Locka…Because it’s in Ali-Baba!”

He laughs uncontrollably and continues, “Remember Ron Sass? I used to call him Ron’s Ass!” After saying that, Rat Bastard plugged his guitar into the Sunn amplifier and proceeded to perform one of the best live solo guitar pieces I have ever seen. Rat Bastard has certainly added pep to his step these last few decades! The man is a fine wine getting better with age.

Rat was also featured on saxophone with Gucci Handelsman earlier that day. Soon after our stellar performance he said, “I never use guitar pedals when I play my guitar and I never use a guitar when I play my guitar pedals…” He was looking at my pedalboard and inquired as to why there were so many knobs on my MACRODOSE PEDAL  Macrodose Envelope Filter with BLEND – AllPedal.

In order to answer Rat’s question about the most wicked guitar pedal on earth: the Macrodose envelope filter, I must astral project or travel in time to where I left off last November in my Jitney piece about Microdose Miami, the Psychedelic Drug-Venture-Capitalist convention that took place downtown:

“We just witnessed the great Mike Tyson speak about many spiritual and healing aspects of psychedelic drugs,” said a vendor in the Adrienne Arsht Center lobby, who claimed to be a certified Shaman (he was dressed like one and had small colorful flyers on his table).

The Shaman informed me of an Ayahuasca Church he was affiliated with, located a mere half hour south of Downtown Miami. There, I would be able to legally experience Dimethyltryptamine (DMT) aka “THE TOAD”: I asked the Shaman about their DMT ceremony, particularly the “Hold 3 Big Hits in Forever” controversy which surrounds DMT.

He answered, “You are standing in a lit-up boxing ring with Iron Mike Tyson himself. You both put on boxing gloves, he is going to punch you, but that is ok…he is the GOAT, and you need this form of therapy in your life right now. Mike Tyson’s punches will go from One to Ten…One being a very soft punch, five being the “breakthrough” level, and ten being enough to cause very serious injury or even death. You can try to block the punches, but Mike Tyson is doing this out of love…he does not want to hurt you.”

The Shaman taps my shoulder and continues, “The first three punches are ok…you start to feel the effects…but by the fourth punch you want to stop. That is enough…But wait! You will take one more hit…the fifth “breakthrough”. Maybe it has knocked you out. You lie on the mat with tears flowing from your eyes yet feeling an extremely powerful energy inside. This is not losing, this is winning! Kid Dynamite himself, Mike Tyson helps you stand up, gives you a hug, and you go back to your corner…to your coaches and medical advisors…”

So, a hit of DMT is like getting punched in the face by Mike Tyson…softly at first? Nonetheless, the Shaman’s analogy was a good sales pitch. It subconsciously prompted me to seek out and take part in a real DMT ceremony a few months later!

“The invisible lady making love to you and me/ Joe Rogan turns into Hulk Hogan at WrestleMania Three/ Cyndi Lauper Captain Lou Albano and Mr. T / or that time I drove my car into the deep blue sea/ I’m drowning I’m drowning,” they sang as I blew out the smoke from my third DMT hit. Must’ve been about twelve minutes with the “Mechanical Elves” before my geometrically swirling brain came to its senses.

I met eight Mechanical Elves, and as I came down from the DMT peak, they seemed to be trying to tell me their individual names. I just couldn’t make it out and hear them clearly. The elves disappeared into a spiraling white light of death as I slowly opened my eyes. I could still hear them singing Oompa-Loompa style: “Now it’s necessary to act like an undercover agent/ Grinding their hate/ trying to stay patient.” Back on solid earth with my eyes fully open a peaceful onlooker asked, “What was it like?”

Guitar players who work with effect pedals know how addictive they can be. We need more and more pedals, spending all our money, until we get that perfect high. Pedals can be as intoxicating as any mind-altering drug! They make a little guitar sound like a thousand lions roaring in the jungle, a million frogs croaking in the rainforest, a nuclear bomb exploding for hours… Stomping on the pedals, turning their knobs, and having such complete control over the guitar’s massive tone is kind of like hitting the DMT.

In fact, that very evening I returned home from my first DMT ceremony, I was surprised to find the Macrodose pedal waiting inside my mailbox. I had ordered it a week earlier from All Pedal. I brought the little hunk of metal inside my house, plugged it in to my Boss BCB-90, and ran the output through my Sunn Solarus. My signal went through the pedal, out the Solarus, and we dropped out of life to the riff filled land.

I closed my eyes and strummed again. The elves were still whispering into my ear, “The ultimate source of creativity is divine/ Flashes of genius inside your mind/ Facing fear and failure we will find/ God is Music…Drone-Pop is so hardcore/ We declare Holy War!”

The drone pulsation got medieval as I adjusted Macrodose pedal’s six smaller knobs labeled: “Warp”, “Frequency”, “Depth”, “Blend”, “Res”, and “Free”, then tweaking the two larger “Shape” and “Mode” knobs. A short-wave-oscillation bounced off the walls as I had an epiphany!

“The Mechanical Elves…their names…these knobs…” The knobs on the pedal had the names of the eight Mechanical Elves I had met on my first DMT trip two hours prior: Warp, Frequency, Depth, Blend, Res, Free, Shape, and Mode! I turned each knob on the pedal, thinking about what a strange world this is. Blinking red and blue lights under the eyes of the animated face had a hit of LSD on its tongue and caught me off guard.

The sounds I was making with my new Macrodose pedal mixed with lingering effects of DMT had me on a Rocketship to God! I had never heard my guitar make NASA type noises before. The Macrodose pedal’s lo-fi squelch was activating a strange creative DMT frequency inside: “Sitting in our bodies all alone/ Deep inside my head a constant drone/Absorbing Sunn Solarus through my skin into my bones/ God is Music.” I could feel positive energy vibrating from my Sunn amp.

The Mechanical Elves’ voices whispered into my ear again, “My mama once dropped me off in the parking lot at a Grateful Dead concert.”

I pushed the tiny silver switch in the middle of the Macrodose pedal from “HP” (high pass) to “LP” (low pass). For a moment I could not breathe…there was no air in the room…only this horrific rumbling sound oozing out of my amp. I stomped on the pedal, turned Sunn Solarus off, and stepped outside to catch my breath. I had already died once that day…or at least my ego did.