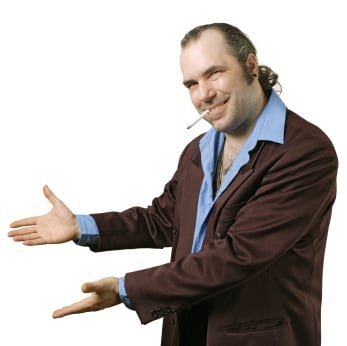 Let me begin by saying that the life of a musician is not necessarily congruent to what is portrayed on social media. When it’s your primary source of income, it can be especially harrowing. The road to any sort of “success” is littered with shady promoters, clueless venues, and broken promises. As daunting as that may sound, one needs to be as accessible and easy to reach as possible if you want steady work.

Facebook-wise, I have a personal page, a page for my full band, Juke, and a page for my one-man-band, Uncle Scotchy. The reason I mention that will become clear shortly. I recently got a message on my Uncle Scotchy page that says they are adding a band to a show on a certain date at a place called “Open Stage Club” in the Gables, and if I was interested I should message back. So I did. The reply I got was generic, quite lengthy, and so full of red flags that I could hardly believe it was real. Once I checked to make sure I wasn’t dead and waking up in shitty-venue-Hell, I decided that this could be used as a perfect example of what to look out for if you are a newer band who is innocently just trying to get out there and play.

Clearly this is just a shady promoter using the venue for her event, but I hold the Open Stage Club responsible as well. It would seem that their entire mission statement is basically relying on people to perform for free regardless of talent or qualifications. Perhaps the customers could cook the food and make their own drinks as well??? But I digress.

I will not bore you with the entire event overview that was sent to me, so I’ll just feed you the things you might need to look out for.

It starts out with a little introductory paragraph that ends with, “I appreciate you guys for considering the gig…”.

I am a one man band and thus devoid of any “you guys”. So we have now established that this is going out to as many “bands” as possible, regardless of merit.

This shindig is all ages. Because of course it is when the promoter is working for the door. I’ll never understand why people think it’s a good idea the let underage people into a venue that serves alcohol for an event like this. The venue stands to lose way more than it gains from taking that risk. It’s science.

Apparently, this lunatic promoter is  planning to jam as many bands that she hasn’t heard of on and off this stage until either the place closes, or she falls over from the weight of all the cash she made. Not only that, load in time is 3:30 – 5pm. That means that even if a band performs at 10 o’ clock that night they need to get their stuff in the club early-bird-early. Fun.

Up until now, I know it sounds like just a bit of a mess and old Uncle Scotchy is just busting balls again. You would probably be right too until you get to the pay.

Coming in strong as Red flag #3, I present to you:

“PAY: Bands keep 100% of tickets sold after 20 (first twenty). Sent 50. This includes: physical ticket sales and online sales. (the revenue generated by the first 20 tickets helps to cover the costs associated with the event) “

Wait, what??? So these bands are supposed to promote this event just to hand 200 bucks to the promoter who didn’t know who they were to begin with???

How is this ok or allowed? Tell that to the kid who sold 21 tickets to his stupid parents and friends, “Here’s your 10 dollars!”

Remember “(the revenue generated by the first 20 tickets helps to cover the costs associated with the event)”??? Yeah, that would be a cost associated with the event. How many poor drummers was this sadistic promoter and venue prepared to sacrifice for this mid-summer musical slaughter? How many bass players risk the health and safety of their toes lugging those cabinets in and out?? C’mon Open Stage Club. You and the promoter can cough up 400 bucks for a pretty sweet backline set up. That’s just two band’s ticket sales!

It’s fun to say “Who would be dumb enough to play that thing?”. But people are going to play it. This is something that is happening. It’s really not the bands’ fault either. When you first get started, sometimes you want more than anything in the world just to have a gig and play in a real venue. They had/have a similar system in L.A. called “pay to play” where the bands just get a percentage of the ticket sales generated from the people coming specifically to see that band perform. This is just a way more exploitative format and it’s not at some cool, L.A. venue. It’s in the damn Gables.

Lastly, just when you think this business plan is not sustainable, I did a little research. This promoter/agent works for a nationwide company called Superior Booking. Superior Booking is apparently profiting on this musical dream-poop all over the country in one genre or another. They have been around since 2013 even though when you Google them, the first two sentence plugs are “scam” and “pay to play”.

It’s pretty obvious that this is just wrong. Musicians, you need to be careful.