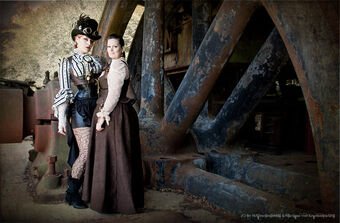 Andújar: The Robot Gentleman of San Juan is a new novel published by local Miami travel writer Carolina Cardona. Set in Puerto Rico in the late nineteenth century, this is the sexy steampunk novel you need to read.

Santos Andújar is a reclusive amputee who lives with his elderly aunt. He appears to be more automaton than man. The mysterious aristocrat living in the city of San Juan barely survived the unknown illness that killed his entire family. But it left him with multiple prosthetics to lead a reclusive existence inside his ancestral ocean-front home.

Yet Santos’ darkly whimsical world is soon besieged by a visit from his beautiful and hedonistic cousin, Violeta Andújar. Far more interested in social intrigue and secret lovers than in the looming Spanish American War that threatens her world, Violeta is at first dismissive of her “invalid” and eternally masked relative until a series of odd and disturbing incidents reveal that enigmatic Santos’ ailment ventures into the paranormal and the oddly futuristic.

Suddenly, Violeta Andújar finds herself in the throes of political turmoil and a darkly bizarre seduction by a man. . . who may not be a man at all.

Publishing the novel during the Covid 19 epidemic is oddly timely by author Carolina Cardona. Tourism is on hold, classrooms are empty and life came to a screeching halt. We are all in masks and feeling uncertain about how to hit the “reset” button.

“I knew this was it. His moment. It’s vitally important that we turn to creativity and escapism,” explains Cardona. “We all miss traveling to our beloved tropical places. We are all itching for adventure. I like to think that now we may be more open than ever to being seduced by an intriguing stranger…in a mask.”

Andújar: The Robot Gentleman of San Juan is now available on Amazon.

In addition, there is a wonderful playlist on Spotify to listen to while reading the book.