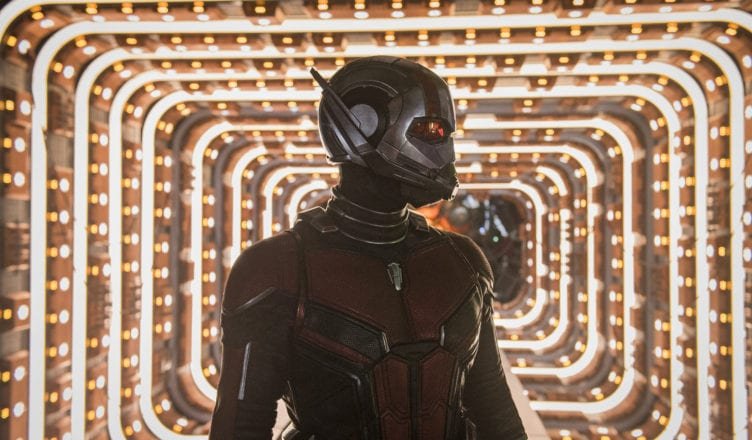 The original “Ant-Man” was a breezy and enjoyable surprise. I was hoping for more of the same with this sequel. After the heaviness of the last Marvel Universe film, “Avengers: Infinity War,” we could definitely use a lighter touch. On that front, “Ant-Man and the Wasp” delivers. With its winning humor and cheerful atmosphere, it’s an amusing and enjoyable two hours. But it has problems. Problems big enough that I ended up enjoying this movie less than its predecessor.

The story here picks up a few years after the events of “Captain America: Civil War.” Scott Lang (Paul Rudd, magnificently droll)­­—ex cat burglar and titular Ant-Man, who can shrink in scale while gaining super-strength thanks to a super suit created by genius scientist Hank Pym (Michael Douglas)—having chosen the losing side in that stand-off of superheroes, avoids prison time after entering a plea-bargain that finds him at the tail-end of three years of house arrest.

Three days before his sentence is up, Lang experiences a memory. Problem is, it’s not his memory. It’s from the long lost Janet Van Dyne (Michelle Pfeiffer), Hank’s wife and mom of Scott’s estranged love interest, Hope (Evangeline Lilly), who between films has taken on the alter-ego of The Wasp (not sure why The Wasp needs a definitive article. To avoid confusion with White Anglo Saxon Protestant?). Basically she has the same shrinking powers as Ant-Man, but she can fly and shoot unconvincing CGI blasts from doodads on the wrists of her super suit. Why she suits up, what or who she is fighting for, sadly, is unclear.

Ant Man and the Wasp: Excitement or Exposition?

The film opens with a scene that values exposition over excitement, explaining Janet’s disappearance. 30 years prior, Hank and Janet were the original, miniaturized superheroes of the title until Janet shrank beyond a molecular level in order to penetrate the metal plating of a nuclear missile and disarm it (even viewed through the prism of fantasy storytelling, the logic here is dubious), becoming lost in the process to the subatomic universe dubbed the Quantum Realm where space and time are irrelevant.

Who fired this missile? Where was it heading? Never answered. And strictly speaking, it is irrelevant. But the movie’s refusal to even hint at the bigger picture here makes it clear from the opening scenes how nakedly thoughtless some of it is. And it sets the tone for the movie that follows, which uses weak technobabble and vague motivations to move the plot forward.  From the outset, “Ant-Man and the Wasp” makes it clear that exposition and explanation are not its strong points.

Ant Man and the Wasp: is it funny?

The film’s strengths lie in its humor and zippy pace. The pace doesn’t allow the narrative much time to breathe, but it stops you from worrying, in the theater at least, how silly the writing is. And the humor is consistently funny, delivered by a top notch cast. Michael Peña, one of the funniest parts of the original, returns as Scott’s sidekick, Luis, with a particular highlight being a scene where he narrates a flashback while high on truth serum. That scene even had a screening full of critics laughing out loud.

The dynamic trio believe the shared memory is Janet communicating from the miniature realm, and the plot kicks into high gear as Ant-Man, (the) Wasp, and Hank race against time (there is a time limit to the rescue because… technobabble) to bring back the long lost Janet.

Standing in their way are the mysterious Ghost (Hannah John-Kamen) who can phase through objects and wants the technology that Pym et al are building for Janet’s extraction, and Sonny (Walton Goggins), a black market tech smuggler whose characterization relies solely on the smarmy, villainous charm Goggins can do in his sleep.

Sonny is further proof of the film’s half-written nature. Why is he getting in their way? He’s pressured by an off screen organization that wants to buy out Hank and Janet’s tech. What is this organization? Comic fans might be expecting A.I.M, a collection of villainous geniuses from the Marvel universe, and a possible set-up for villains of future Ant-Man endeavors. Alas, the groups identity is never revealed. Turns out they’re just a cheap motivation for an extra villain who can provide a giant car chase in the finale.

Is Ant Man and the Wasp worth your money?

But that car chase is satisfying. And part of me wants to give the movie a recommendation because of fun stuff like that chase, and because it’s a superhero movie the whole family can enjoy together. We don’t get many of those these days. If there’s something that stops me, though, it’s this: The movie has nothing more to offer, spectacle-wise, than what you see in the trailer. If you’ve seen it, you’ve seen the best bits of the movie. In a few years, when the trailers evaporate from our memories, it probably won’t matter. But right now, when we have to pay upwards of $15 or $20 bucks for a movie, this one’s just not worth the dent it will make to your wallet.

Note: Like most Marvel movies, this one does have two post credit sequences. The first one is important. The second? Not so much.

“Ant-Man and the Wasp” comes out Friday, July 6th, with early screenings starting July 5th at 7pm. Catch it at a theater near you.

This article was written by Pavel Klein, movie critic for the Miami-based Punch Drunk Movies. You can also check out his blog of filmic musings at Write Pavel Write.