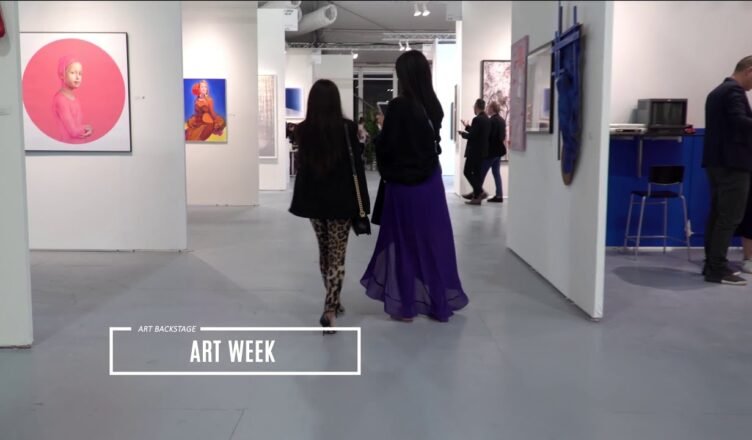 Art Backstage is a recently released documentary profiling artists, gallerists, and their work during the 2019 Art Basel festival.  It reveals a behind the scenes look at one of the world’s poshest events.

The film is streaming now and will be shown at multiple art fairs.

The format of Art Backstage is a Q & A between French filmmaker and Miami resident, Marina Eskenari, and a flowing river of 39 artists, gallerists and patrons of the multiple fairs associated with the festival. The film takes us to Pulse, Scope, Context, Art Basel – you name it, the film goes there.

Art Basel in real-life is dizzying because there is so much happening. It is a whirlwind. Art Backstage captures the maelstrom perfectly with equal parts art, contemplation and party.

Nothing’s perfect. The incessant EDM music playing over the film is a tad redundant. It would’ve been nice to hear some jazz or classical music, but that is more an issue of taste. More importantly, the film does what it promises in its title, it takes you backstage at Art Basel so you can see and almost re-live the spectacle for yourself.

Art, of course, reflects and comments on society, but it also tends to predict patterns in culture.  For example, the theme of African American empowerment comes up frequently in the documentary, almost foreshadowing the Black Lives Matter movement which exploded in 2020.

Interestingly, in 2019, art did not foreshadow the pandemic, with pestilence and disease.  2019, in hindsight, now seems very decadent.

This film showcases it. For once upon a time, in a galaxy far, far away, there existed a time and place where beautiful people from all over the world gathered in masses, inside air-conditioned tents and high rise condos, surrounded by the most exquisite art in the world.

They spoke to each other with civility, sharing ideas, over champagne and laughter. Art Basel, only 8 months ago. It feels like forever.