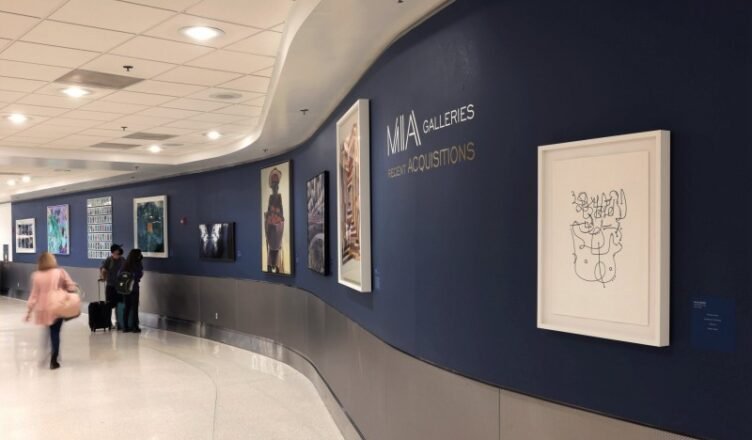 In 1999, it was my good fortune to speak with Robert Farris Thompson, prolific Yale scholar of Black Atlantic culture as it has evolved in Africa and the Americas. We discussed one of Miami’s best-known artists, internationally famed Cuban-born José Bedia, who weaves together Caribbean, African, and Native American influences. “Bedia’s right at the forefront of contemporary art and culture,” said Thompson. “José is teaching us how to move into this multi-ethnic situation.” Bedia’s art is shaped by Miami’s fascinating cultural diversity, which is generally quick to dazzle the eye and just as quick to provoke more questions than answers. “Miami is teaching the world what it will be like in the 21st Century,” Thompson told me then.

Here we are in 2021, survivors of the 21st Century’s plague years, still wary of surges even though many have been vaccinated. Against a backdrop of deadly tumult all over the globe, Miami has moved forward for the most part in art and culture, having already attracted talent throughout the country as well as the Caribbean, Latin America, Europe and beyond. Struggling and managing to persevere, many artists continue their creative work even as a global pandemic has delivered its murderous onslaught, even as hurricanes and fires propelled by the climate crisis devour life and property with unprecedented velocity.

To support the local art community in 2020, Miami International Airport (MIA) has purchased artworks by fourteen visual artists of Miami-Dade County. Holding a mirror up to this fraught time of multiple stressors, these artists reveal daunting challenges as well as Miami’s determined resilience. In photography, painting, works on paper and prints, they address topics like perennial tensions between the built environment and our natural resources, especially lush vegetation, glistening waters and the Everglades. They address topics like the vibrant colors and customs of our diverse neighborhoods in a place where many have emigrated under duress from their homeland and struggle to forge a new life.

That essence of a place where increasingly few are native-born is articulated in Tom Virgin’s broadsheet combining poetry by Edwidge Danticat and poetic visual art by Laura Tan. It’s one of six broadsheets in Virgin’s portfolio “Home/s” purchased by MIA. A celebrated letter press printer, Virgin commissioned collaborations with writers and visual artists for this portfolio.

In “Home?,” Danticat writes,
We are born speaking one language.
We die speaking another.
We are seeds in one soil.
And weeds in another. . .
We don’t always get to decide where we
call home. 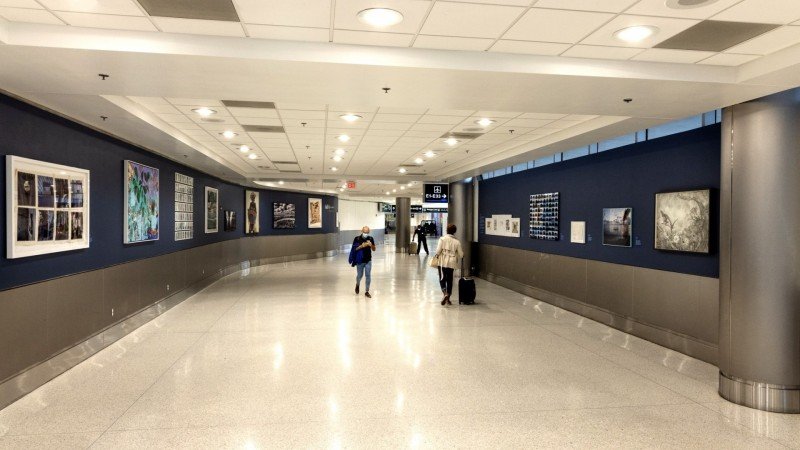 The magical blue colors of iconic Biscayne Bay inspire and haunt artists. How long will we be graced by these azure and emerald vistas along that porous boundary between land and water? The bay is already scarred by chronic pollution and excessive boat traffic. On August 11, 2020, the Miami Herald reported that thousands of dead fish were floating in Biscayne Bay, as a result of 90 degree temperatures that led to a decline in dissolved oxygen making it impossible for fish to breathe. (This fish kill happened again in September 2021.)

“Every Being Is An Island, I” by Amalia Caputo is an extraordinary document of the bay’s fragile shoreline. Her 100 photographs of the bay’s mangrove clusters, vital guardians of the bay’s ecosystem, are rendered in changing light and shifting blues and greens, arrayed in a grid like the precious gems they are. Intrigued by dance-like patterns of waves,
Monica López de Victoria creates an abstract meditation with watercolor and thread on paper, conjuring the life-giving motion of water, in “Feeling Ripples”. It’s an apt image derived from her years of melding visual art with performance art, with many performances and videos demonstrating her creative passion for synchronized swimming.

Cara Despain captures the silken sheen of the bay in a quiet moment before the day breaks or ends. In her staged photograph “sea unseen”, silver balloon letters spelling UNSEEN graze the water’s surface. They skewer a tranquil vista with an ominous warning of underwater threats.

With signature sensitivity to natural history, Christina Pettersson depicts a coral island at the end of the Florida Keys in the Gulf of Mexico. This island belongs to the Dry Tortugas archipelago and is portrayed in her drawing “Dry Tortugas”. The archipelago’s nesting colonies of exotic birds like the brown noddy in her drawing are the only such colonies in North America, Pettersson explains in an Instagram post. In modulated shades of gray, she invites viewers to experience the island’s interlaced biodiversity under a wide open sky, honoring its unique remoteness.

Others lift up the region’s surreally excessive vegetation, treasures not be squandered. Composed with microscopic clarity and graceful geometric abstraction, “Ode to Nature Series” by Carol Jazzar reveals intimate details of exuberant plant life, transformed by moments in glaring sunlight or cooling shade. Most of these 70 jewel toned photographs were shot during sharp eyed explorations of her neighborhoods El Portal and Miami Shores, north of the city’s hectic downtown. For his “Transcend #11,”Ian Patrick O’Connor employs a large format 4×5 camera to immerse us in a verdant setting surrounding a bold orange square. The centrally placed square focuses our attention on the less publicized virtues of some Miami locations that blessedly lack urban hustle and glitz.

A photograph by Luján Candria, from the series “Roots to Branches #9”, is choreographed with delicate black, gray and white arabesque shapes, drawing us into a forest dense with mystery, from which no light escapes. From her “Consumerist Collection,” Annick Duvivier’s mixed media collage painting “Outside Influences” ricochets among often out-of-focus objects and memories, miming the materialist clamor of social media. Grounding the chaos is a central leafy branch with a woman painted apparently inside its slender base, claiming her vulnerable refuge.

Maria Theresa Barbist and Silvia Ros, exploring different settings miles apart, underscore how the built environment is forever making headway on lush environs, even when that environment signifies Miami’s creativity. For her “Eingenaeght (Bakehouse)”, Barbist has sewn onto canvas eight photographs of the Bakehouse Art Complex, which has nurtured artists with studios for over 35 years. She portrays stairwells, work spaces and chain link fencing as the resilient “skin” of an artistic community within a subtropical city.

Ros photographs historic post-war Brutalist concrete architecture in South Florida and Cuba. Her majestic black and white photograph “Everglades Vista, Shark Valley Observation Tower, Concrete Miami”, shows the Everglades unfurled beneath the sweeping ramp to the Shark Valley Observation Tower, which opened in 1966. In this photograph, sensual shapes of vast cumulus clouds floating above the horizon rhyme with the concrete ramp hovering between land and sky.

Miami’s “multi-ethnic situation,” so admired by Robert Farris Thompson, deftly undergirds art produced here, particularly by Regina Jestrow, Najja Moon, and Addonis Parker. Jazzy rectangular patterns in Jestrow’s “American Quilt #10” riff on the classic “Log Cabin” quilt pattern, considered a symbol of pioneer life dating to the Civil War era, reflecting her interest not only in folk art quilts but also current demographics. This quilt, part of her “Americana” series begun during Black Lives Matter protests, is composed of 45 colors, paralleling wide-ranging skin tones in the American population. Among her quilt’s many tilting lines, there are few right angles, surely underscoring the challenges of finding common ways to move forward in a diverse city with a transient population.

Moon’s line drawing, “All and Both”, bristles with dynamic energy. It seems to map out loose and lean dance steps as well as designs for open-ended gatherings, suffused with the multiple directions of her visual aesthetic informed by queer identity and Black culture.

In “Covid Cure”, Parker’s luminous portrait of a Black woman in Little Haiti holding a bowl of mangoes radiates a healing spirit. The bowl is poised tenderly on her lap, like a child. Inside the bowl, mangoes gleam a luscious scarlet orange, echoing her head scarf. Both fruit and scarf form a dramatic counterpoint to her expressive face, painted in bluish black and pink tones. She welcomes viewers to partake in the bounty of this vitamin-rich tropical fruit.

It’s a stunning portrait created as the pandemic stalked with particular vengeance elderly people of color. This woman’s gracious pose gestures to the healing attributes of artworks recently added to the MIA collection. They’ve been mindfully shaped by an historic plague year.