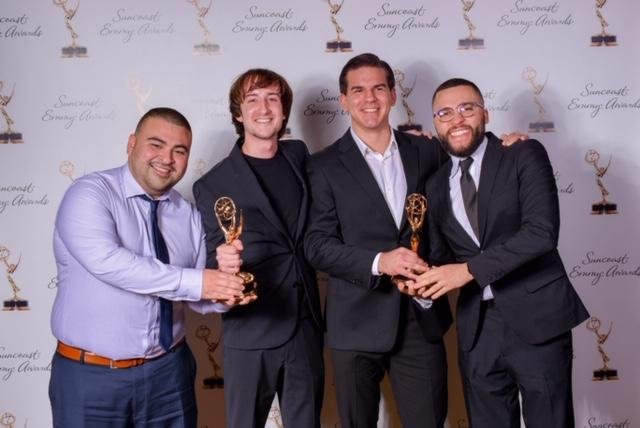 In Miami art is all around us. With their documentary Art Vessel  local filmmaker Mateo Vengoechea and visual artist, Gabriel “GG” Gimenez wanted to capture this scene.  Their efforts have recently been awarded. After appearing last year on PBS “Film Maker” Art Vessel won a Suncoast Regional EMMY for the Documentary – Cultural category . After enjoying this moment of triumph Vengoechea spoke about the film he produced and directed, the Miami art scene, and what he has next up his sleeve. Underneath the interview you can watch the film in its entirety.

Jitney Books: How did you decide who were you going to interview for the movie?

Mateo Vengoechea: GG had a list of contacts we could reach out to and delve into what Miami was becoming in the art scene. My duty was to articulate our intrigue into questions that led us down a path of honesty from our interviewees. I believe to speak about the world, you must be able to speak about yourself first and that shows in the personal answers from the interviewees expressed in the documentary.

Can you go into the process of creating the movie? How did you raise the funds, find the crew, and decide to shoot in both New York and Miami?

Raise funds?! My wallet took a hit! (laughter) We went into this project fully unaware of what we were capturing. It was usually a crew of two, myself and Luis Aquino (Producer/Dir. Of Photography/Editor), and for major interviews we had Steve Zimmerman as well (Sound Designer). We all know each other from film school and from being talented, hard-working, and committed artists. None of us got paid in money, yet the achievement of creating this film is an incredible reward.

Any funny or interesting stories you can share while shooting the documentary?

Absolutely! During one of the interviews, I told Luis we had to hurry and shoot without lighting the scene. He gave me “The Look.” He ran to the car, popped the trunk and carried a full light-kit case bigger than him to the location. After looking at the footage, he gave me “The Look” one more time. I shall never question him again.

What was it like winning an EMMY for the movie?

An immense feeling of friendship. This film was made by a crew of people who speak to each other about every aspect of life. We all stayed in the same hotel room the night of the ceremony. We ate at Denny’s. Paid with the statuette. Just kidding!

How has the art world changed since the completion of the film? Anything you would focus on if you were to shoot a sequel?

I feel Miami is getting recognized for its art, yet we have years to go before that’s how we as a city are first spoken of. If we were to shoot a sequel, Jitney Books would be one of the first to know. That’s all I’m saying!

What are you working on next (or now)?

I am currently working on three film related endeavors: scriptwriting for Telemundo Studios, finalizing a project I directed for FilmGate Miami and entering post-production for one of the best short films Miami has ever seen. It’s going to be a great year for myself and those I have had the pleasure and honor to work with.