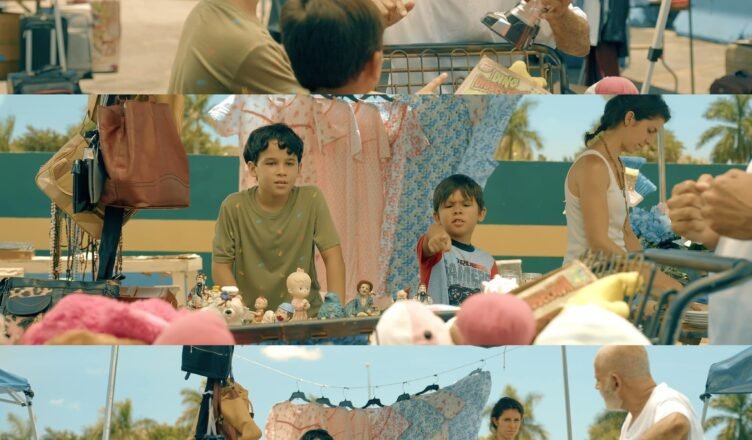 As a film student at the University of Miami, I often find myself wanting to support local artists and Miami film companies. There is no better artist to support than the one in your city, and there’s no better film to watch than one with an important message. For these reasons, I was extremely excited to find a new film by Miami’s own, FlickHouse Studios, that surpasses all of these expectations.

The film that I am referencing is called Awake Before Dawn and follows a young boy as he tries to earn a little extra money. 10 year old Santi, along with his little brother and single mother, works at Miami’s Opa Locka Flea Market. As their only means of income, their immigrant mother relies on their profits at the flea market in order to survive.

Santi tries to make a sale, but cuts the buyer a deal, diminishing the profits Ma needs to keep their lot and continue making money. Once the money is lost, Santi must learn what it means to make sacrifices and where his priorities must lie. The young boy goes through loss and tragedy in an effort to learn these pivotal life lessons.

In discovering this touching film, I also feel as though I found a new favorite film studio here in Miami. FlickHouse produces heartwarming and high quality films that are as entertaining as they are powerful. Owner of FlickHouse Studios, Jose Navas, was born in Nicaragua, but raised in Miami where he would eventually find himself enrolled at the Miami International University of Arts and Design, where he would later receive his film degree.

Another member of FlickHouse is Angel Barroeta, best known for his work on several award winning short films as well as advertisements for companies such as Coca Cola, Nintendo, and Ford. Barroeta started in the film industry by filming skateboarding videos, but eventually found a passion for writing narrative films, which are typically FlickHouse’s focus.

The company revolves around writers who intend on creating their own stories and continuing with those stories through production, Awake Before Dawn being an example of this type of work. FlickHouse’s films are written within the company, which oversees the process from the early stages of brainstorming potential films through post production and screenings. Often overlooked, FlickHouse sees writers as the foundation of the film industry and they prove that writers are filmmakers.

As a former student of the craft himself, Navas set up an incredible program for young filmmakers across Miami-Dade county. FlickHouse studios houses a top of the line internship program allowing students access to a wealth of knowledge and endless communication with filmmakers in the industry. This program allows students from local universities to get hands-on experience and learn what it really means to be a filmmaker.

This internship allows students to work on films like Awake Before Dawn in order to get experience working on real film sets, rather than solely in a classroom. This film was also shot on scene in the Opa Locka Flea Market, an experience unlike those obtained in any course.

Navas and FlickHouse studios both play important roles in the Miami community and the film community at large. Between the important messages of their films to the opportunities they provide to student filmmakers, they are the perfect company to support and watch as they climb the ladder of the industry. Be sure to watch Awake Before Dawn once it’s released in mid 2023, or even earlier with their initial screenings happening as early as January 14, as it’s a film you don’t want to miss.

Megyn is a young filmmaker currently studying screenwriting at the University of Miami. Originally from Boston, she moved to Florida in order to expand her options in the film industry.

View all posts by Megyn Lynne →