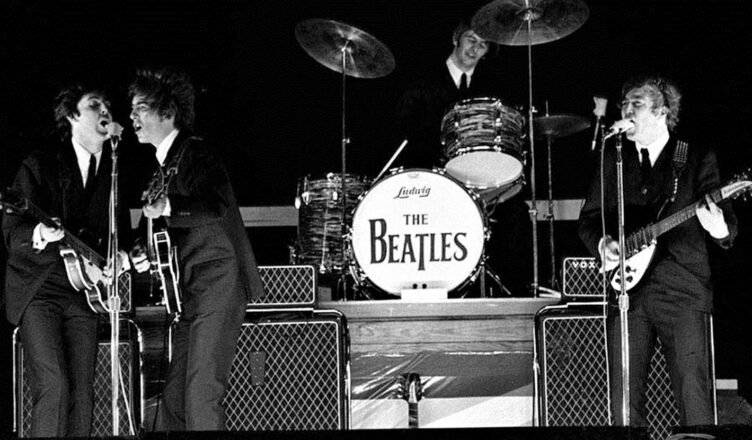 The show quickly sold out. However, Dora had left fallen trees blocking highways, preventing approximately 7,000 fans from getting to the Gator Bowl.

It was the Fab Four’s first trek into the Deep South (not including an earlier show in Miami), and it would prove portentous.

Professor Brian Ward of Northumbria University in Newcastle (UK) is working on a book about the Beatles’ complex, sometimes painful love affair with the American South. The book’s working title is, fittingly, She Loves Y’all.

After all, most of the music the Fabs emulated came from the South. The group specialized in “covering” songs by black artists such as Little Richard and Doctor Feelgood, both from Georgia; Chuck Berry, from Missouri; and Arthur Alexander, from Alabama (the Shirelles and the Isley Brothers, both from New Jersey, were exceptions, as were a couple of Motown acts, the Marvelettes and Barrett Strong).

It wasn’t just black artists though: The Beatles also recorded songs by southern country and rockabilly acts such as Texans Buddy Holly and Buck Owens along with Carl Perkins from Tennessee. Their biggest idol was of course Elvis, perhaps the most revered southerner to hit the world stage.

Hence the group’s music was, to a large extent, a reflection of the South.

However, The Beatles, to their everlasting credit, refused to accept segregation—a sacred institution in some southern circles—and publicly stood up to support civil rights for African Americans.

Yet the Beatles had few black fans. One of the reasons black teens generally didn’t dig the Beatles might be because they were already familiar with many of the artists the Beatles had covered. The Beatles’ mission was to bring black music to white kids. Black kids didn’t need the Beatles—they already had the real deal.

Kitty Oliver, an African-American scholar and retired professor from Jacksonville who now lives in Ft. Lauderdale, was one of the rare black Beatles fans. She could not find a black friend who would accompany her to the Beatles’ Gator Bowl concert—so she went alone.

Fifty-two years later, she would appear in Ron Howard’s Beatles documentary, Eight Days a Week, and would be flown to London for the film’s premiere, where she met Sir Paul McCartney himself.

Five days before the Gator Bowl show, The Beatles,

asked about performing in the South, reiterated the terms of their engagement contract: “We will not appear unless Negroes are allowed to sit anywhere they like.” On Sept. 8, in Montreal, the group conducted another press conference in which John Lennon repeated the remark, specifically citing the upcoming show in Florida.

Billee Neumann Bussard, who was then a teen-age reporter at the scene, said that when the Beatles arrived at Jacksonville’s George Washington Hotel, they found that blacks were prohibited as guests, and this may have alarmed them. The Beatles held a press conference in the hotel, where they again reiterated their refusal to perform if the show were to be segregated.

However—this is crucial, and it’s the point most writers omit—city officials insisted to local reporters that there had not been and never were any plans to segregate the show.

Were they telling the truth?

In his book, The Beatles: A Diary – An Intimate Day-by-Day History, cultural historian Barry Miles mentions the city’s claim that the show was never intended to be segregated. He may be one of the only writers to ever report this.

The Florida Times-Union responded crudely with an editorial pronouncing the Beatles’ music trash and extrapolating from their lyrics that the group members had neither the information nor the intellect to comment on US politics. This was interpreted by some as a “dog-whistle” racist riposte.

But city leaders said as little as possible. 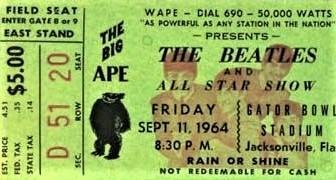 At bottom the question remains: what would city leaders actually have stood to gain by segregating the concert?

Perhaps it might have—at best—gotten them some political capital with racist voters. After all, Mayor Haydon Burns had run—and won—on a segregationist platform back in 1949 and managed to hang on for four terms. He had been mayor during the city’s notorious “Ax Handle Saturday” melee in 1960, in which police had been accused of allowing racist counter-protestors to brutally beat civil-rights demonstrators in downtown’s Hemming Plaza.

Surely Burns realized that with his reputation he would have made a convenient straw man in this unfolding drama and wisely removed himself from the stage, so to speak. Alan Bliss, executive director of the Jacksonville Historical Society, points out that Burns was in the midst of a heated campaign for governor and could ill afford a bad move. Burns at this point would likely have “preferred to avert any kind of public-relations blunder [having] the potential to make Jacksonville appear backwards or racist.”

Defying the federal government, George Wallace-style, by enabling segregation at this time would have jeopardized the city’s receipt of federal funds. The Civil Rights Act of 1964 had recently been signed into law by Lyndon Johnson—a vindictive man with a long memory whose ire most politicos with any sense would not wish to provoke.

It would also have breached the performance contract. WAPE owner Bill Brennan would have had to pay the Beatles for not performing, and he would likely have gone after the city for compensation. There would have been lawsuits along with very vocal reactions from 30,000 ticketholders, most of whom held no qualms about screaming their lungs out.

Any reasonable person at that juncture would have tallied up a cursory cost/benefit analysis. City leaders may have been racists, but they were not, after all, complete eejits. Bottom line is there was almost nothing to gain and far too much to lose.

Only a fool would have taken the gamble.

There is the distinct possibility city officials were simply lying. Isn’t that something politicians are good at? But their claim has never been discredited: No one has, to date, uncovered a smoking gun demonstrating that the concert was slated to be segregated.

At this point it boils down to which side you choose to believe.

There is a third and very likely possibility, which Ward hints at: the controversy might have been provoked by reporters who goaded the Beatles with loaded questions implying that the southern shows would likely be segregated, and if so, what were they going to do about it?

But the fact is segregation really was not an issue at this specific juncture: the Beatles had already made their stand when they insisted a non-segregation clause be included in their performance contracts. It had all been settled quietly weeks or even months before when the contracts were submitted to promoters and agreed to.

Ward posits that the Beatles, responding to reporters’ insistent questions, “kept defaulting to their contractual and moral stance that if [any shows were slated to be segregated], they wouldn’t play. When they were assured there’d be no segregation, they played.”

But it appears the only reason the Beatles required any assurances was because they were hearing rumors that promoters might disregard their contracts. The facts seem to indicate it was a great, big non-issue.

Yet over the years the story has assumed mythical proportions. Writers and reporters have had—and continue to have—field days about how the Beatles stuck it to the man in Jacksonville.