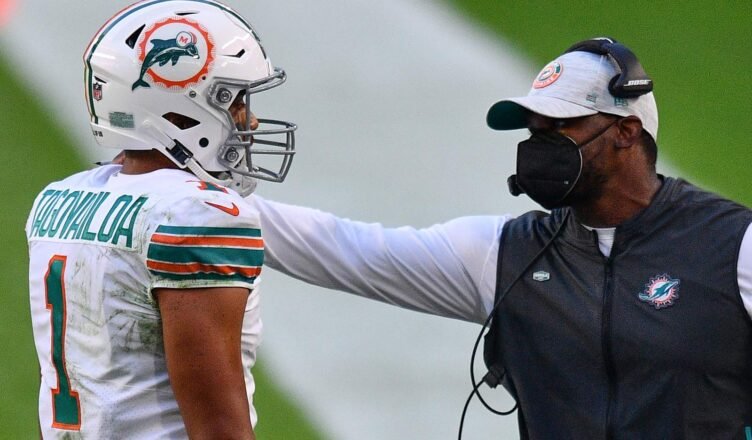 Five days after Tua Tagovailoa announced “I thought the NFL would be a lot harder” he was benched in favor of Ryan Fitzpatrick in an embarrassing 20-13 loss to the Denver Broncos. Tagovailoa routinely missed open receivers, held the ball too long and showed very little pocket awareness. If not for an Xavien Howard interception deep in Denver territory the Dolphin offence would have likely been shut out. The key question is whether coach Brian Flores made the correct decision to bench Tua.

Quarterback is the most important position across team sports. The position bears the burden of responsibility for their team’s success or failures. That does not however alleviate the pressure of teammates to perform around him.

Let’s consider the atrocious play of the offensive line. Tagovailoa, who entered the game with an injured foot was pressured on 44% of drop backs and sacked 6 times. Denver defenders lived in the pocket all game seemingly running through Miami’s offensive front. With no semblance of a running game, Bronco pass rushers pinned their ears back and harassed Tua all game.

The Dolphins’ running attack has been ranked last in the NFL since the start of last year and the problems continued Sunday. 56 yards on 17 carries is a sure-fire way to sputter your offense and put a rookie quarterback at a disadvantage. Miami’s receiving core can’t escape criticism as well. 40 percent of Tagovailoa’s attempts were considered “tight window throws” which means receivers failed to create enough separation.

Self-sabotage or poor offensive scheme the result remained the same. The Broncos’ defense blanketed Miami’s weapons all afternoon long. In order to better understand coach Flores’s decision, you must put the moment in its proper context. Down ten in a must throw situation with an offensive line who couldn’t block the three blind mice is not a situation where you want Tua ad-libbing his way down the field.

It was the right time to bench Tua.

When you take into account Tagovailoa’s injured foot the decision should become quite clear. In that situation, under those circumstances Fitzpatrick absolutely gave Miami a better chance to win. If Tua (or the locker room for that matter) can’t recover from a quarterback benching in midst of a poor performance, then all parties involved need to reevaluate exactly the direction of the franchise.

Tagovailoa will respond. The team as a whole will play better against the Jets and Bengals and should sit at 8-4 primed for a long-awaited playoff run.