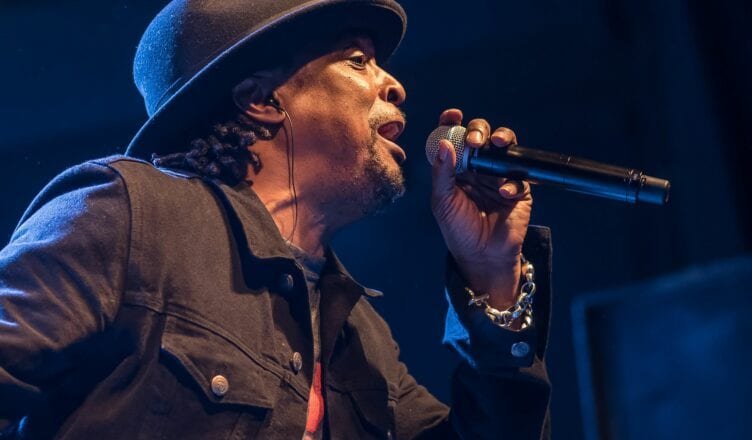 No matter how many times you’ve heard The Rolling Stones’ song “Sympathy for the Devil,” you’ve never heard it the way Bernard Fowler does it. His rendition starts with the familiar rattlesnake rhythm, but when the vocal arises the cadence is completely different, the arrangement too. The fifty year old song sounds strikingly new. If you like it, there’s even more songs where that came from on Inside Out, Fowler’s new album of Rolling Stones covers all done spoken word poetry style.

“I read lots of poetry as a kid. The Last Poets, Nikki Giovanni, I grew up listening to them,” Fowler said over the telephone. “When I was sitting there thinking what I’d do next, spoken word popped into my head.”

If you’re wondering what made Fowler connect spoken word with The Rolling Stones it’s because Fowler has a 30 year history of working with the legendary band. Since recording backing vocals on Mick Jagger’s 1985 solo record She’s the Boss, Fowler has sung on nearly every Stones album, tour and solo project since then. He’ll be on stage in Miami’s Hard Rock Stadium August 31 accompanying “Jumpin’ Jack Flash” and “Brown Sugar”. But of the eight songs he covered on Inside Out with the exception of “Sympathy for the Devil” and “Sister Morphine” Fowler opted for their deeper cuts.

“I went to The Rolling Stones songbook and went through the pages looking for the strongest lyrics. I knew going in I would do ‘Undercover of the Night,’ but other than that I just looked for the lyrics that were strong.” The arrangements of the songs also came out spontaneously he said. “I made them up as I recorded.”

Bernard Fowler’s Rolling Stones’ covers are strong enough that it seemed reasonable to ask if The Rolling Stones might allow him to lead them on one of his covers during their stadium tour. He scoffed at that idea, “Why would we do that? Open it with spoken word and then they play? That’s too much.” Instead Fowler has played a couple solo shows showcasing these songs on his nights off from the Stones.

The response has been kind enough that Fowler has been toying with recording a sequel. His next spoken word album would have more Stones songs, but also branch out to cover other acts. Fowler wouldn’t divulge who those bands might be. But whatever happens in the future Fowler has some satisfaction with Inside Out. “My plan was to do what Inside Out is. I was able to get out what was in my head.”