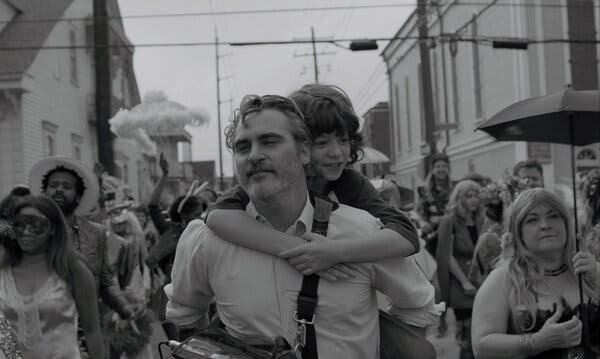 I revel in contradictions. Case in point: I will happily read any and all best of lists, especially end of year ones, and especially best movies lists, but coming up with a top ten list of my own strikes me as ridiculous. I have friends in the Florida Film Critics Circle who say things like, “oh, that’s my number three movie of the year, but it might even move up to number two,” or, “I liked it a lot, but it’s right outside of my top ten.” Organizing the things you like into such regimented spaces seems weird to me. Reductive. I’m probably just jealous. My mind is basically applesauce, so I don’t even know how to compartmentalize the movies I like. But, I was asked to put something together for The Jitney, so I came up with this compromise: five movies in no particular order that I reaaaaaally liked this year. If you’re so inclined, I recommend giving them a look.

A black and white movie with lots of talking. I know, typical movie critic fodder. But it’s also warm, honest, and overflowing with empathy. Joaquin Phoenix is wonderfully subdued, but exudes caring and patience, which does get tested, as he takes care of his young nephew (naturally wily newcomer, Woody Norman) who may suffer from bipolar disorder. Crisp cinematography wows with its linen whites and battleship grays. Think Ansel Adams if he’d focused on urban environments. Top it off with a top notch soundtrack by half of indie rock darlings The National and you’ve got a special drama that’ll hit you right in the feels.

Super weird head trip. Dev Patel cuts a striking figure as wannabe knight, Sir Gawain. A nice pivot from his geekier turns in the past. But this is all about director David Lowery. He delivers a supremely earthy take on the classic Arthurian tale, all ominous fog and murk, punctuated with trippy moments like weird, bald giants coming out of the myst, booming past our protagonist, or a wordless 5 minute montage at the film’s end. I admit, it’s so out there, I didn’t quite get the movie at first, but it stuck with me. The day after seeing it, something kept nagging at me. I felt like I’d been through something. Turns out, I was; I went through a journey called The Green Knight. This one will stick with you for a while.

Wes Anderson is great. I’ve taken that for granted. I saw the trailer for The French Dispatch and kind of dismissed it. Yup, that sure looks like another Wes Anderson movie, I thought and moved on. The thing is, another movie from this dude is something to be treasured. I immediately remembered that once Dispatch began. Endlessly witty, perfectly structured with razor sharp editing, this is another expertly constructed trip through the director’s diorama-like worlds. And how lucky we are to be able to take another trip with Anderson, who has honed his skills to perfection. Hilarious and affecting in equal measures, I do solemnly swear not to let Anderson ennui ever take hold again.

They finally got it right. Director Denis Villeneuve gave us an adaptation of Frank Herbert’s great sci-if novel (well, half of it, at least) that actually, y’know, makes sense. He uses the two and a half hour runtime to effectively bring us this far flung future story that’s always been more political drama than straight up adventure and kept it interesting and logical from beginning to end. Add to that perfect casting, Timothee Chalamet is Paul Atreides and Aquaman as badass Duncan Idaho? Getouttahere! Great special effects and production design round out this Hollywood extravaganza. This is why big budget movies exist.

The Power of the Dog

Jane Campion is back and better than ever with this patient western. It’s one of those movies that takes a long while to reveal what it’s actually about and where it’s going, but once it gets there, watch out. It’s a gut punch you’re happy to receive. And the journey getting there offers a lot of riches as well. Benedict Cumberbatch embodying toxic masculinity. Kodi Smit-McPhee as a seriously awkward teenager you don’t want to underestimate, and, of course, gorgeous cinematography that has New Zealand oddly and successfully subbing for Montana. We FFCC’ers gave it the best picture of the year nod, and it’s a fine choice indeed.