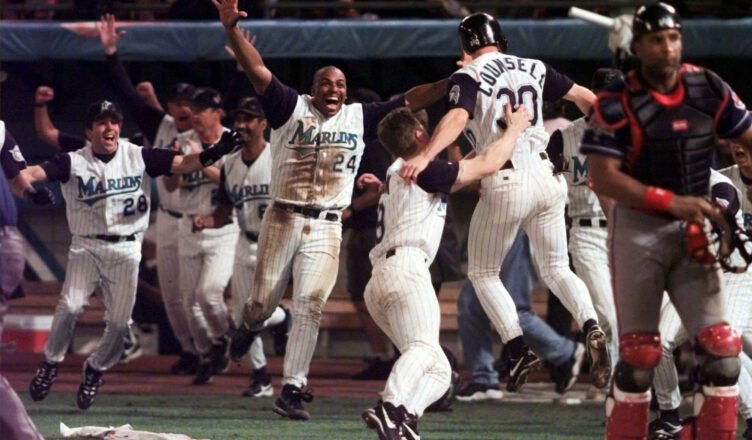 It hit me the other day. The Miami Heat just made the NBA Finals, the Marlins won a playoff round, the Panthers made the NHL playoffs, and even our cursed Dolphins are on a five game win streak with an exciting quarterback. Disregarding the whole you can’t attend games thing, could 2020 be the best year ever to be a fan of Miami’s sports teams?

Let’s take a look back at the last 55 years of Miami professional sports history and see if it could possibly be true that there was no time like the present. And if not which season was the best in Miami sports history.

You have to look at any season where a local team won a championship. The Miami Dolphins qualify for getting 1973 on that list, after winning their second of back to back championships. But going 15-2 and beating the Minnesota Vikings in Super Bowl VIII seemed kind of lackluster with what happened the previous season, so we’ll scratch this one off the list.

The Florida Marlins won their second ever World Series, but the rest of the Miami sporting scene was pretty dismal. The Miami Heat were in the lottery for the second straight year going 25-57. The Florida Panthers were just as bad, missing the playoffs with only 24 wins themselves. The Miami Dolphins had a winning season going 10-6 on the back of Ricky Williams, but still missed the playoffs.

This time it was the Miami Heat who brought home the glory with their first ever NBA Finals victory. But the rest of Miami’s athletes stunk. Nick Saban was eyeing his way out of Miami leading the Dolphins to a forgettable 6-10 record. The Marlins had a losing record at 78-84, meanwhile the Panthers had a winning record, but still missed the playoffs finishing eleventh in their division.

The Miami Heat led by LeBron James won their second championship, and finally got a little company in the postseason. The Florida Panthers won their division and were invited into the Stanley Cup Playoffs. They lost in the first round but it’s a heck of a lot better than the Marlins or Dolphins did in 2012. Both finishing with awful records.

The Miami Heat repeated as champions. Even more memorably they had the second longest winning streak in American professional sports history at 27 games. But again the other teams did a championship year no favors. The Marlins, Dolphins, and Panthers all failed to make the playoffs leading some to petition that Miami sports teams should never again be named after animals.

Some would argue it was the greatest season in professional sports history. The 1972 Miami Dolphins are the only pro team to ever finish a season undefeated, capping a 17-0 season with a Super Bowl VII champagne shower. But February through August was a lonely time for a Miami sports fan as the Dolphins were the only game in town. The Heat, Marlins, and Panthers were still  decades from their expansion births. And while that leaves the entire city as undefeated for all of 1972, us sports fans are greedy. We want our best year to have more victories even if that also comes with more losses.

The Not So Obvious Choice:

We’ve been concentrating on pro sports, but the 1980’s University of Miami Hurricanes were one of the greatest dynasties of the decade. And their first championship was also coupled with the rookie season of Dan Marino’s where he led the Dolphins to a 12-4 division winning record. But still no Heat, Panthers, or Marlins to add to our joy.

Still in the Running:

We’ve had no champion yet. But as I keep watching the Dolphins I’m starting to delude myself a Super Bowl is a possibility. If by some miracle the Dolphins win the Super Bowl this year and you add that to the Heat’s Finals trip I think 2020 would have a valid case to being the best ever year for Miami’s sports teams. Hell, if the Dolphins can even just make the playoffs in 2020, it will be only the second time ever that all four Miami teams made the playoffs in the same year. And as you might have guessed from the leading photograph that other year is our winner.

The Best Miami Sports Year Ever:

The (then) Florida Marlins broke the trophy drought. After 24 years without a Miami pro sports’ championship the Marlins won their first ever World Series. And for once our other teams didn’t slack. Dan Marino and Jimmy Johnson led the Dolphins into the playoffs.  The Panthers also made the postseason as well. Meanwhile the Heat surprised everyone winning 61 games and making their first conference finals appearance. There was no better time to be a Miami sports fan, except maybe for now.