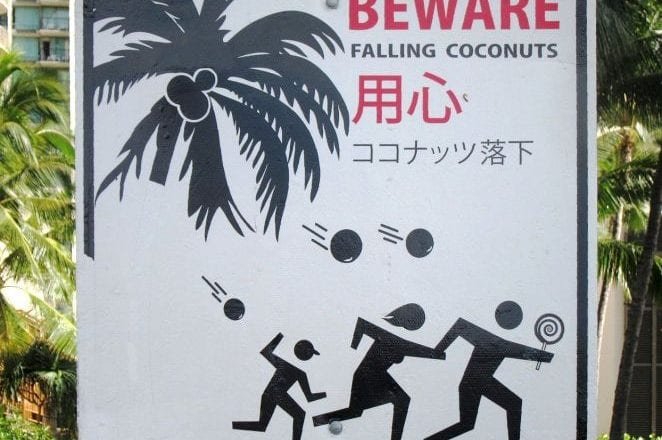 My father takes great satisfaction in the coconuts he harvests. He brought one to my home and handed it to me with pride, “This is a good coconut.” Indeed, as I shook it I could hear all the water trapped in its shell. But it sat on my kitchen counter for a week maybe two. Coconuts are a pain to open. When I was younger and I would find one I would smash it on the concrete until it cracked open and the water would leak in an unholy mess toward my mouth, but mostly on my shirt or the floor beneath me.

But as I was coming home the other day my neighbor Guillermo who does the landscaping for the building asked me how my daughter was. During our conversation I had an idea. “Tiene un machete?” I asked him.

He brought out his blade two feet in length and I got out my coconut. I shook it. The water was still in there. As I took the handle of the machete Guillermo warned me, “Cuidado.” Careful. It was less than a month ago that he had an ugly cast on his arm. My comprehension of Spanish comes and goes , but I think the machete might have been the cause of the stitches he showed me on his arm.

As I held the coconut with my left hand and swiped the blade with the right I realized doing this under the August sun was not my brightest of ideas. The guys at the beach selling coconuts made it seem easy, but I was struggling to get through the husk. Finally after much sweat and fortunately no blood I could see some white mixing in with the brown. I kept cutting and I had cut open a slight enough opening that I could drink from the coconut. It was as sweet as I hoped. I ran upstairs to give my wife a taste. I poured the remaining water into a glass which made me sad for how little yield I got from all that effort. I would not last long on a desert island.

But I picked inside the coconut and the white meat tasted good. I decided to frustrate myself some more and went back down to cut open the rest of the coconut. As my palm grabbed the machete I saw a round woman waddle in my direction. I thought it might be the apartment manager who might not be happy about the mess I was making, but as she got closer I could see she was older. She hollered upstairs, “Guillermo!”

She walked over to me and put her hand over her mouth feigning concern. My Spanish again is shaky, but I think I could translate what she was saying as, “Don’t drink that. That’s an old coconut.”

“It’s dried. it’s contaminated. It will make you sick. I knew someone who drank a coconut like that and it made them sick and they had lesions and blisters all over their mouth.”

I know what rotten fruit tastes like, and I explained this coconut was sweet, but she said it with enough authority to give me concern. If she walked into a casting agency with the white hairs protruding from her chin they would immediately find a role for her as a shamanistic witch doctor. I was torn. I did not want all my hard work to go to waste, but it would not be hard for a person to be more in tune with the ways of the coconut than I was.

I walked back upstairs with the coconut in my hand as Guillermo walked down. I thanked him for the use of his machete and the last part of the conversation I could overhear was the woman telling him, “That man will be very sick tonight.”