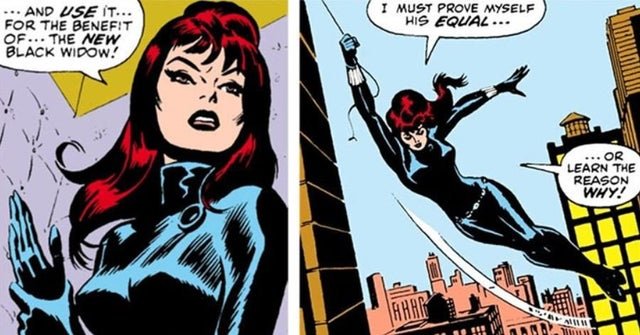 The Marvel Cinematic Universe needs female-led superhero movies, but I was never sold on the idea of giving a solo adventure to Black Widow. For one, the character was already killed off in the last Avenger’s movie, and two, I never found Natasha Romanoff, the ex-Russian-assassin, all that interesting in the first place. Standing next to her Avengers team compatriots, Iron Man, Hulk, Thor, and Captain America, Black Widow was second tier and of secondary interest. But here we are, a movie with Black Widow at its center, and you know what? It’s surprisingly fun. But you know what else? It confirms that Black Widow really is a supporting character.

With Black Widow’s fate in the MCU, I knew this was going to have to be a prequel of some sort, and with the character’s background as a brainwashed assassin raised by an evil Russian organization, I figured Black Widow would be an origin story in the vain of the recent Jennifer Lawrence starring Red Sparrow, dour and unpleasant, where we follow Natasha as she rises through the ranks of a sadistic education while watched over by an uptight matronly figure, hair pulled back into a bun, carrying a ruler and curling her lips around an over-the-top Russian accent. “Da!” I imagined a prim Helen Mirren sneering.

But Black Widow isn’t that at all.

Rather, the movie is a spry and surprisingly funny globe-trotting thriller that surrounds Black Widow with a great cast playing supremely enjoyable new characters. Director Cate Shortland keeps the movie afloat with themes of family and interfamilial squabbles, and she puts a refreshing emphasis on Black Widow trying to help people rather than murdering her adversaries. But then the movie runs into the brick wall that is the MCU third act. But I’ll get into that later.

The movie begins strongly with a lengthy flashback sequence that friend and fellow movie critic Rubén Rosario succinctly described as Running on Empty with a dash of The Americans: sun dappled imagery and idyllic Americana enveloping a suddenly tense drama. The opening works so well it somehow isn’t undone by the ensuing credit sequence set to a somber, orchestral backed cover of…”Smells Like Teen Spirit”?! Yup, I’m not kidding. It’s super cringey on the one hand, but somehow it still works. I guess some songs are so good you can’t ruin them (although f*cking The Muppets from 2011 gave it their best shot).

I once described Scarlett Johansson as “fascinating and sympathetic even when playing a bit of a blank slate.” I wish I still felt the same way here. Johansson returns to play the titular Black Widow, but despite her talents, disappears in her own movie. The supporting characters are more entertaining and easily outshine her, especially her newly introduced sister, Yelena, played by radiant up-and-comer Florence Pugh, and her father, an alcoholic, Russian ex- (or really, never-) superhero called Red Guardian, played with rumpled charm by the ever-dependable David Harbour. In a weird way, the movie seems to realize that these characters are more interesting and almost serves as a tentative backdoor pilot to more adventures with these characters.

Things move along nicely: Introductions, some mystery, a bunch of action. The action is fine if nothing terribly special, but a car chase through the streets of Budapest benefits from the nice scenery of location shooting. In general, the copious chases and fisticuffs acquit themselves just fine, but too much chintzy CGI does them in a bit. Often, things that should have real weight, an SUV flung through the air, a motorcycle jumping over a car, zip across the screen, lighter than air and as fast as a character in a Benny Hill sketch.

After a bunch of action beats, the movie downshifts to let the characters interact with each other.

These scenes are not only a necessary breather but provide the movie with its heart. The problem though is that just as these scenes start wrapping up and the movie gears up for third act finale fireworks, it just keeps gearing up and gearing up, trying to frantically set up a finale with a villain that has been too far in the background for the film’s run time.

And now, for that “typical MCU third act” I sniffed about earlier. I want to clarify that, in general, I like the MCU’s finales, which usually feature a hidden base, lots of explosions, and a host of cannon fodder bad guys for the heroes to spectacularly dispatch. Black Widow is no different, except it feels more perfunctory than ever and keeps the spectacular dispatching to a low simmer, as if Cate Shortland really didn’t give a shit about any of it. The setting is laughably stereotypical and revealed with a hushed awe as if we haven’t seen something like it a million times in the MCU before. Still, it could have been promising, these kinds of fanciful locations always grab my interest (I’m being vague on purpose, by the way. Spoilers, you know?) but not much is done with it visually. We barely glimpse it from the outside, and inside it’s just mostly generic, indistinct hallways and rooms without windows rife for blowing the f*ck up.

Eventually, we end up in a room with the main hero and the main villain. But instead of a tense stand-off, it plays more like a dull and endless conversation as Ray Winstone reveals his plans (with a dodgy Russian accent that can’t quite exorcise his inherent British-ness), only to be rebutted by Black Widow explaining her plan instead, back and forth they seem to plan and replan while the runtime keeps adding up. Finally, something happens, and while there are some neat moments, it all feels too little too late with a liberal pinch of (to stick with these overused platitudes) been there, done that.

But after the characters stand in the wreckage of yet another blow-‘em-up finale, the movie doubles down on its familial bonding and on Black Widow herself trying to be a better person instead of just the last person standing. What can I say? I’m a sucker for that stuff. So, while I don’t think that Black Widow ultimately proves the need for its existence, I’m glad it exists all the same.

By now most people will know whether or not they’re up for a Purge movie. Surprisingly, I’m usually up for one. The Forever Purge, the fifth movie in the series along with two seasons of a tv show, does what just about every Purge movie does: sets up a survive-the-night (day in this case also) situation for a group of racially diverse strangers, adds in a heaping handful of heavy-handed political commentary, adds a liberal dash of gnarly violence, and tops it off with some hope. Viewed through that lens, this new movie works well enough.

I’ve always liked the concept of this series, an annual, government sanctioned 12 hours of anything goes anarchy meant to purge us of our worst urges. Many have been quick to point out that this doesn’t make a lick of sense. And yeah, it doesn’t. But, with no offense to the armchair know-it-alls (like myself, to be honest) who think their cleverness depends on pointing out the obvious, that’s kind of the whole point. It doesn’t make sense, and most everybody in the movieverse know this, especially those whom it affects the most adversely: people of color, the downtrodden, and the poor. Yet, it still continues, set up by rich old white men to thin out the populace of “undesirables” who don’t want them in power and weaponized by self-righteous zealots who mindlessly scream about how it’s their “freedom!” to commit bloody violence. Does any of this not sound familiar? It’s a potent parable.

And I’ve been impressed with how each subsequent movie in the long running series has expanded this idea while still sticking to its roots as a B genre movie. The Forever Purge continues that tradition. Here, somewhat annoyingly, the purge is reinstated after all the trouble gone through in the third movie to get rid of it, dispensed of in quick voice-overs during the opening credits. But then, even though it’s a reset, things move forward again with the concept. Like the sequels that Hollywood prefers, it’s more of the same, but different. The purge night, this time, goes off without incident for our heroes, two recent illegal Mexican immigrants and an affluent white family of ranchers they work for. The next day, however, after the blaring sirens announce the end of the bloody event, the violence and anarchy continue as the aforementioned zealots can’t abide with just 12 hours of anarchy and band together around the country to keep it going. Our heroes must then group up and make a run for the Mexican border, which has opened access for a limited time, while dodging homicidal maniacs all around them.

Far-fetched? Maybe, but after a year that saw basic practices to keep us safe politicized to a standstill, the stupidities that we as a human race are capable of don’t seem so far-fetched anymore. Besides, I like the progression of the movie’s concept, how the “purging of violence” actually just begets more violence until the hunger for it is insatiable and our country collapses into chaos. The purge eats up it purgers. I’m not quite sure, though, I believe that Canada and Mexico would open their borders to us, even for a limited time. Now that’s far-fetched.

The movie has a slick look, but that slickness doesn’t translate to the action sequences.

A police van hit by an RPG is seen mostly from the inside as the car flips over. It’s presented with Matrix-like slow-motion, but it goes on so long I thought my screener got stuck buffering or something. When it finally landed, I was like, “Oh, that was intentional?” Later, the dreaded oner is attempted: we follow the action in one long take with seemingly no edits. The fact that this trick is so overused (1917 made a whole movie out of it just recently) and the “hidden” edits so easy to spot, it doesn’t much impress in the best of examples anymore. It doesn’t help that here the camera just listlessly follows a group of people from one building to the next with the fact that it’s supposed to be one take barely even registering.

But that’s also par for the course when it comes to the Purge movies. The genre elements are never really mind blowing and perfunctory at best with set pieces often boiling down to generic shots of shooting and getting shot, momentary CG blood entering the frame. I’d love to see one of these movies done by a real genre aficionado. As this is partly a Blumhouse production, the mavens of horror and B-movie shlock, why not bring Leigh Whannell aboard? He showed real promise with his Blumhouse movies Upgrade and The Invisible Man. The mind boggles at what someone like that could do with a Purge movie.

In the end, though, I still liked the simple pleasures The Forever Purge provided. There is something rousing seeing a diverse cast, fronted predominantly by people of color, coming together to kick racist ass. When one of the white ranchers asks an Indigenous American why he’s helping him and his compatriots battle a group of encroaching Purgers when it’s not their fight, he answers, “This has been our fight for 500 years,” while cocking a gun. No, it’s not nuanced. No, it’s not subtle. But, dang it, it is awesome. And while the movie around it is never that awesome, it’s still worth your time if you’re a fan of the series.