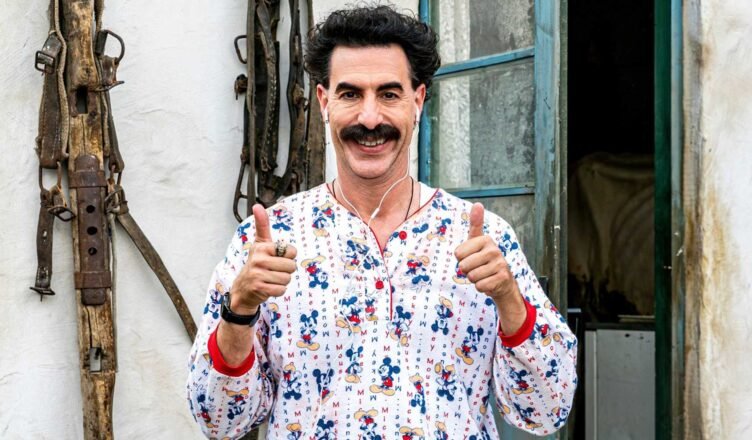 These seven months are the longest most of us have gone without seeing a movie in a theater. At this point it’s hard to imagine we’ll feel safe to sit in a crowded,  air conditioned enclosed space ever again.  Even worse coronavirus seems to be the final shove for movie theaters to suffer the same fate as record stores. Niche curiosities kept alive by die hard hobbyists with the majority of the population staying home to stream their entertainment.

Of all the genres of movies I feel it is the comedies that will suffer from this the most. There’s nothing like seeing a hilarious movie in a packed theater.  Strangers’ laughs compounding with your own tend to make every joke exponentially funnier.  And so as excited as I was to learn there is a new Borat movie, it was a little bittersweet to learn it was only available streaming on Amazon Prime Video.

You couldn’t laugh any harder watching Borat Subsequent Moviefilm on a beautiful IMAX screen with state of the art sound than I did on my laptop with a cracked screen, but it is sad to know we don’t have the chance to put it to the test.

The first Borat movie in 2006 was a phenomenon. The Kazakhstani reporter portrayed by Sasha Baron Cohen (who 20 years into it is my frontrunner for funniest dude of the 21st century)  mixed smart and dumb humor into a cocktail of beautiful anarchy. I distinctly remember during that theatrical experience missing some jokes because people were laughing so hard at the previous gag.  Fourteen years later rewatching it  in my living room the sight of Borat challenging how polite ordinary Americans remain in the face of absurdity holds up. The flick was only slowed down slightly by the central plot where he’s stalking Pamela Anderson.

In the sequel Borat Subsequent Moviefilm he attempts to give away his fifteen year old daughter to Vice President Mike Pence. But again any hint of a plot is just an excuse to get Borat in situations where Cohen shines, speaking in a funny accent and seeing how insane he can make a situation. Whether it’s greeting men with multiple kisses or asking the most racist questions possible, the movie succeeds beyond my sky high expectations. It has made headlines already for revealing Rudy Giuliani was ready to make his brand of sweet love to a young reporter who flirted with him, but the interactions with everyday people is also comedy gold. I’m not one hundred percent sure all the jokes aren’t scripted in spite of the documentary approach, but if a movie makes you laugh this hard who cares if it was done under false pretenses.

To be fair some of the political humor falls flat and some of the gross out jokes go a little too far into the silly zone, but there are more laugh out loud moments than we probably deserve. Watching the below trailer I was amazed by how many clips in the preview didn’t make the final cut. Since the release of this movie came as a complete surprise, I’m praying that means Cohen has enough outtakes up his sleeve to release a third Borat movie.

Here’s hoping that day will come soon and it’ll be safe to watch the final part of a Borat trilogy in a theater together.