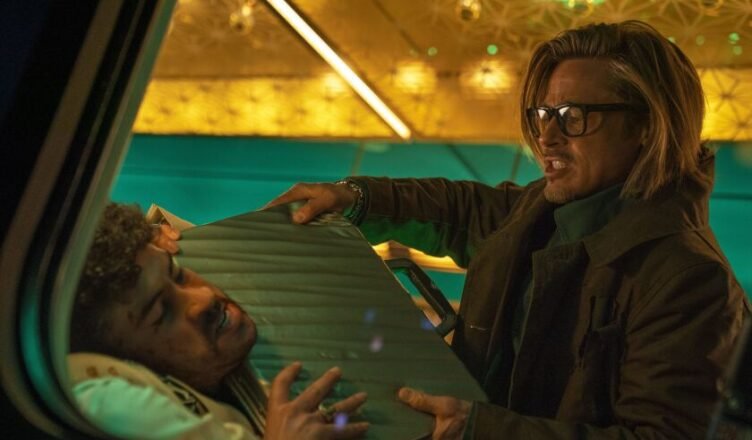 I really wanted to hate Bullet Train.  That’s a ridiculous sentiment to share. Why fight traffic to attend a movie screening you are rooting against?

I was betting on Brad Pitt. The one time heartthrob has a pretty good track record for picking solid movies. While not every one of his flicks is a Fight Club or Ad Astra, for the most part I leave his films with a good taste in my mouth. Maybe good ol’ Tyler Durden would come through and Bullet Train wouldn’t be as painful a viewing experience as its preview hinted.

But all my fears about Bullet Train I picked up from its trailer, kicked in right from the get-go.  With all the quick cut flashbacks and “outrageous” nudgenudgewinkwink humor and ultraviolence it reminded me way too much of all the qualities I hate about Guy Ritchie films. It was this style more than the story about an unlucky criminal trying to snatch a suitcase on a Japanese train that got on my nerves.

Then something strange happened, I found myself laughing. And wincing when a character found themselves in peril. Even more peculiar, as I left the theater, I found myself satisfied that I actually had fun.

Don’t get me wrong,  Bullet Train is not nearly as funny or clever as it thinks it is. I don’t know what possibly could be. But it speeds along at a fast enough pace moving from one fight scene to another that you don’t have time to let its smugness get to you. There are no dead spots to ponder whether a plot point makes sense or if a character’s accent is consistent. There are too many distractions from hyper athletic fights to containing more surprise celebrity cameos than even a Marvel end credits scene, to keep track.  Before you know it Bullet Train has reached its destination.

How do you know when there are too many superhero movies? I think it’s when a movie with the title DC League of Super-Pets is released in theaters. This is an animated movie about Superman’s dog and his animal friends saving the day. My nine year old daughter loved it and she hates superheroes. I love superheroes and I didn’t even try to fight sleeping through it.

It’s wonderful that they’re making superhero movies for kids. Although I wish they’d be of better quality than DC League of Super-Pets.

But what the hell is wrong with media conglomerates that so many of their superhero movies aren’t made for kids?