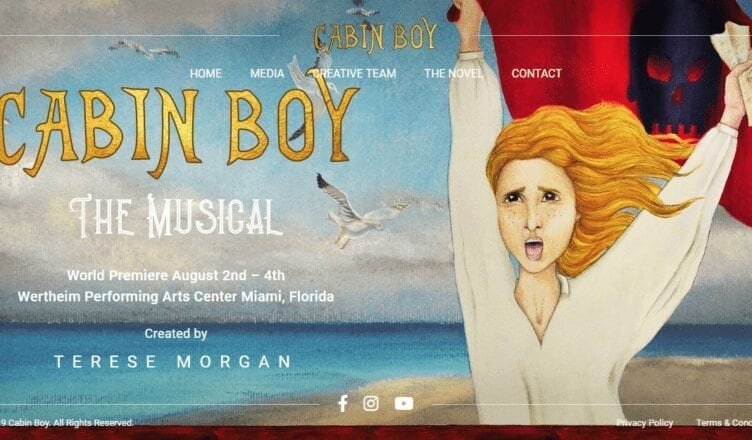 Cabin Boy: The Musical is the debut play by Terese Morgan world premiering August 2-4 @ FIU Wertheim Performing Arts Center. The premise of the family friendly musical follows a 13-year old as she searches for her missing father among a world of dangerous pirates and enticing treasures.

We caught up to Terese to talk about her new musical.

Cabin Boy is originally a children’s novel, correct? You wrote it. Tell us about its origins.

Now walk us through the creative process of creating and adapting Cabin Boy the musical.

My main challenges with adapting the script came from having to change the locations of scenes in the story so that it would be easier to do on a stage. Also, because I was writing lyrics and orchestrating the music at the same time, the songs came slowly and I could not work on more than one song at a time. It was a learning curve for sure. I had not written anything as big as this before. Orchestration is very painstaking work, but when the music finally comes out right, it’s magic! For me, writing the musical score to this show was like writing a whole other novel.

Who are some of your literary influences?

My sister and I grew up loving Harry Potter, so I definitely absorbed a lot from J.K. Rowling. I think it’s brilliant how she crafted the plot of her story over those seven books, and how she fits in just enough description to paint each scene in your mind without dragging the pace of the story. I also appreciate that her books don’t shy away from heavier themes like death, war, and bigotry. Her stories show that young people can stand against those who would harm others, and I want kids who experience Cabin Boy to feel empowered in a similar way.

Cornelia Funke is another children’s author I read a lot of.

What can we expect from this production?

A family friendly show with a ton of adventure and heart! This show helps children (especially girls) to see themselves as heroes. It has strong positive themes of friendship through adversity, family relationships, standing up to bullies, and opposing gun violence.

The performance is 90 minutes long (without intermission) and is great for girls and boys.

How is writing a musical different than say a drama or a comedy?

I think all musicals can have drama and comedy in them, but musicals tell the story more through song than through dialogue.

​I love all superstitions in general, even if I don’t believe in them. I just think it’s really funny, interesting, and endearing that people follow these strange yet harmless traditions together. When I participate in them, it makes me feel more connected to other people.

My two favorite theatre superstitions are leaving the Ghostlight on an empty stage, and not saying Macbeth when you enter a theatre.

Anything else you would like to add as to why we should see this play?

WORLD PREMIERES don’t happen every day! This musical has been in development for three years, and we are THRILLED to finally bring it to the public!

To reserve tickets, please call Roxy Theatre Group at 305-226-0030. Tickets can also be purchased at the box office the day of the show.