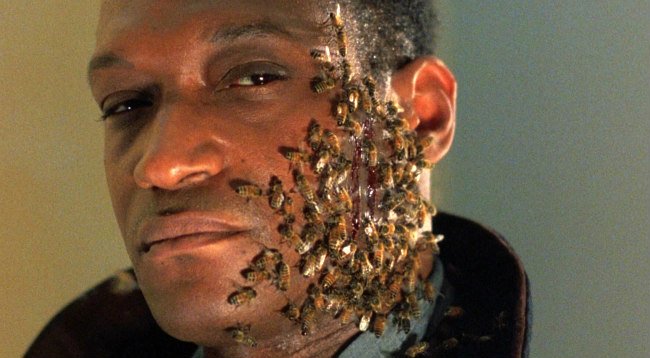 The most interesting thing about the new Candyman movie is that they decided to set the reboot of the 1992 horror movie in the year 2019. By explicitly setting it pre-pandemic the filmmakers don’t have to explain why no one is wearing masks nor social distancing.

If only they put as much thought into the crafting of the rest of this silly movie.

Perhaps if I’d seen the original 29 year old Candyman, this current rendition would make more sense. But from what I could gather the gist is that if you look into the mirror and say the name “Candyman” five times, the titular hooked character will come out of the mirror and gore you to death. Sounds like it could be a fun, dumb splatterfest, but instead of leaning into the innate stupidity of this enterprise the filmmakers  try to sprinkle social commentary and race relations into this bore.

Candyman‘s producer and co-writer Jordan Peele found financial and critical acclaim a few years ago by mingling social commentary with horror in Get Out. But that flick had two key ingredients Candyman is missing, a sense of humor and the lack of obligation towards an existing intellectual property. When you try to shoehorn serious issues like racism and police brutality into a movie that only deals with the topics superficially, it can seem more exploitive than the grossest of horror movies.

Earlier this year when the value of all kinds of worthless things from stocks of broke companies like Gamestop to digital pictures to cryptocurrency to baseball cards went through the roof, it seemed financial collapse was a breath away. But months have passed and everyone still has their shirts on their backs. The new documentary The Lost Leonardo is a reminder that insane speculation is nothing new.

It takes a good half hour for the movie to find its footing but stick with it and you hear a fascinating story about a recently unearthed painting of Jesus, supposedly by the most famous artist of them all, Leonardo da Vinci. The only problem is that there is ample evidence that the painting wasn’t composed by Leonardo. But that doesn’t stop the value of the painting shooting upward until it becomes the most expensive painting ever auctioned.

At times the movie almost seems like a satire, like one of those Christopher Guest mockumentaries like Best of Show, as you’re introduced to a wide range of art connoisseurs with too much money on their hands from Russian oligarchs to Saudi princes.  But The Lost Leonardo is dead serious in the message that how much something is worth is whatever the richest person is willing to pay for it.