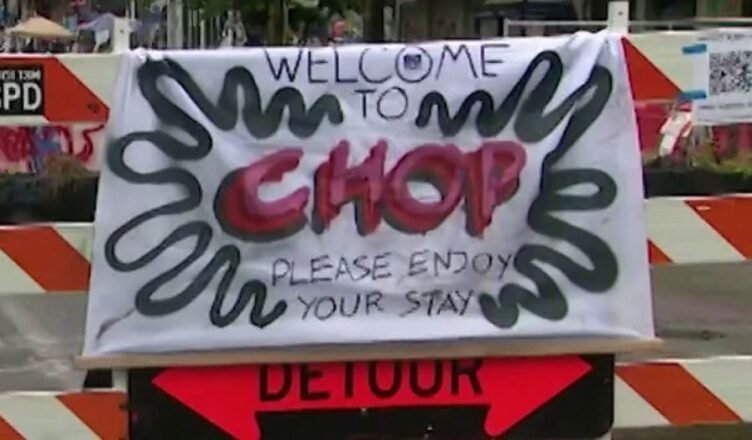 It was a balmy wet night in Miami. Cable news in the background, Twitter-in-hand, he fell into a dreamy slumber and awoke inside the Capitol Hill Organized Protest in Seattle. It was so vivid.

A beautiful young lady stood. She had blond hair and piercing blue eyes. She looked around the circle with an air of seriousness.

“I PROPOSE,” the crowd repeated her words.

“And look for seahawks…”

“AND LOOK FOR SEAHAWKS.”

The one thousand people on the ground raised their arms to the sky and began to shake and wiggle their hands and fingers, as if in touch with the Lord, or at least a really good impromptu jam—they had jazz hands. Then the crowd, made up of grey headed revolutionaries, students of the arts and sciences, bespectacled hipsters, long-haired hippies, veterans of foreign wars, yuppie libertarians, gypsy anarchists, teamsters, a few vagrants and vagabonds,  a couple of three-card-monte cardsharps, a tarot card reader, a counterfeiter, a diseased yoga instructor, a fraudulent priest, peddlers of empanadas, a music promoter, a few local bloggers, a poet, a record store owner, a sports bookmaker, a concierge, a City Councilman, a few alms-seekers, and a reggae band, all stood with the blond girl and proceeded to walk away from the Government Center towards Pike Place to look for seahawks because.

“WE ARE THE NINETY-NINE PERCENT!! FEEL THE BERN!!”

The Miami boy didn’t know if he should run as fast as he could, or join what must have been some sort of circus he had rolled into. He felt shocked, appalled, enthralled and definitely ninety-nine percent curious.

Just then a young man walked towards a tent.

“We are those who have been fucked by the rich capitalistic corporate pigs like Trump who place profit over people, who infuse the political system with dirty money ensuring our leaders and police are manipulated by lobbyists while our civil liberties and first amendment rights are drowned out! Many of us lost jobs to outsourcing! We are those who’ve fought in foreign wars and worked hard to protect, honor, and serve this country and its God-given freedoms and constitution! These people yell ‘feel the Bern.’ But what they really feel is gonorrhea.”

“You are well-spoken!! I agree. I work very, very, very hard pursuing fame and fortune in the Unites States of America. It is not fair other people should simply be given these things. What is your name?”

“My name is Mambo. I’m a veteran of three tours of duty in Afghanistan. I’ve just returned after five years and I no longer recognize this land I once called home. Overseas I worked my ass off from the crack of dawn until the stroke of midnight.

“We moved, hustled, scouted, crawled, chased, and hid from al-Qaida in the rugged hills of the North, rucking almost seventy pounds on our backs, in addition to weapons. During the day the desert reached an unbearable 120 degrees and my balls would sweat and chafe so hard it felt like a snake lived in my shorts. Then at night those same balls would freeze their asses off. I have been cornered in a cave by snipers for three days.

You were made out of plastic, fake

“I’ve seen friends shot to death right in front of my eyes. I have killed, with bare hands I’ve killed and bleep you dickhead if you think it doesn’t keep me up every night of my life. Now I’ve returned to what? Cops killing black people while my friends from high school have morphed into pot smoking, coke sniffing frat-boy lawyers and there isn’t even any decent work in this country I love to hate.”

As Mambo told his story, the other occupiers had returned from looking for seahawks. They sat back down in a horde at the same well-lit spot about twenty yards away from the campsite. The same beautiful blond girl stood up and prepared to speak her mind!

The horde raised jazz hands into the sky.

The night continued into the wee hours as the reggae band, sports bookmaker, poet and three-card monte cardsharps entertained the valiant protesters.