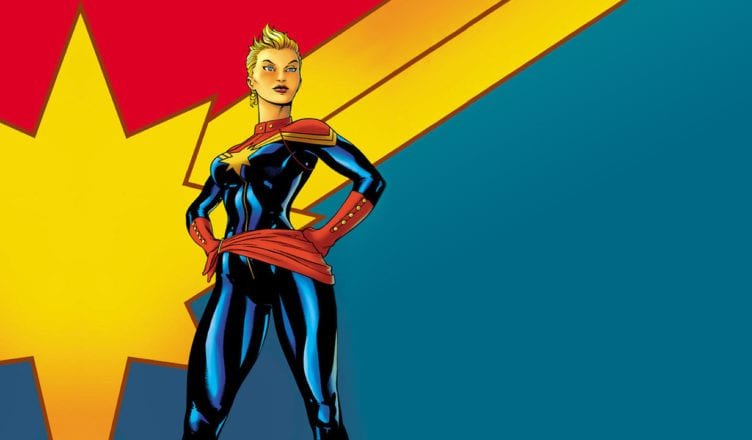 Captain Marvel returns us to the incredibly successful Marvel Cinematic Universe, adding yet another comic book characters to its roster of silver screen superheroes.

Captain Marvel is not a bad movie. There’s a clear arc for the hero, it’s funny, and the story actually shocked this curmudgeonly critic who thinks he know where every movie is going. Surprised I had to sign an Non-Disclosure Agreement before entering the screening, I thought “what could I possibly spoil?” Turns out, quite a bit. Hence the following ludicrously vague plot synopsis. There’s twists here that genuinely surprised me and took the movie in unexpected directions that, frankly, I was grateful for. Where it was going for the first hour was kind of humdrum and predictable. Maybe it’s that first hour that filled me with the “meh”’s?

The sci-fi story begins on Hala, the home world of the Kree, humanoid aliens whose distinguishing features are their blue skin and green blood. Living among them is Carol Danvers (Brie Larson). An earthling with amnesia found by the Kree, she doesn’t know how she ended up on the alien world, her previous life on earth, or how to control her powers, laser blasts that emit from her hands bestowed upon her by the Kree.

The Kree are at war with shapeshifting aliens the Skrull, and even though Carol has a temper, which complicates control of her powers, her tactical and physical prowess see her conscripted into an elite Kree tactical unit by her mentor, Yon-Rogg (Jude Law). A rogue’s gallery of powerful aliens, the unit is sent on their first mission, a search and rescue assignment on an outlying planet invaded by the Skrull. Things don’t go as planned, leading to an adventure on earth in the film’s present, our not-so far-away past, the 1990s. Here, Carol is pitted in a race against time with the Skrull, both trying to reach a McGuffin left behind by a mysterious woman from Carol’s past (Annette Bening), providing answers in the process about her life on earth and revelations about the war between the rival alien factions.

No, the movie isn’t ineptly made or anything. Coming from directors Anna Boden and Ryan Fleck who debuted with the fantastic Half-Nelson over a decade ago, that shouldn’t come as a surprise. They provide some unexpected and timely political commentary. There’s an earthiness that is purely them as filmmakers during an extended plot-stop in Louisiana. But those moments are all too brief, with too much of the movie leaning into the generic. The ‘90s setting is  fun, even if not that much is done with it, other than using it to hurl a bunch of ‘90s songs at the audience. But as those were, partly, my formative years, I enjoyed the musical nostalgia. And I like how the movie uses its place in the timeline to connect to events later down the Marvel Universe road. But the characters, sets, the action sequences are all so familiar to fans of the Marvel films that, even though there’s laser blasts and spaceship battles, it’s all just a little ho-hum.

What does set the movie apart from the rest of the Marvel Universe and superhero movies in general, has everything to do with its Oscar winning star, Brie Larson. Larson’s an outspoken feminist, and that seeps into the film, making it a welcome and long overdue tale of female empowerment in the superhero realm. There are no romantic subplots and no sexual tension to speak of. Carol Danvers is not defined by a relationship with a man, a stance that is made powerfully clear by film’s end. That hand clapping moment transcends its obviousness, becoming a spine-tingling moment the movie is all too often bereft of.

Sadly, she’s also what holds it back. With all of the sexist garbage thrown her way (remember the whole “smile more” debacle?), I’m reticent to lay the film’s problems at Larson’s feet. A very good actress, I was excited when she was chosen for this superhero role, but she’s not as perfect for it as initially thought. The way her character is written  doesn’t connect with Larson’s strengths. Carol Danvers is sarcastic and quippy. But there’s an underlying seriousness to Larson that doesn’t mesh with sarcasm particularly well. The words come out of her mouth (and, often, they are funny), but her demeanor, her eyes don’t have a glint in them, don’t sell lines. By the time she starts laboriously “who-hoo”-ing during the action sequences, it becomes clear that her performance is just too forced.

The underlying message of the film is important and special. But the package that delivers it isn’t. Captain Marvel is totally okay. I’d even put it in the upper echelons of okayness. But, channeling punny movie critic Gene Shalit, I think Captain “Meh”-rvel would have been a more appropriate title.