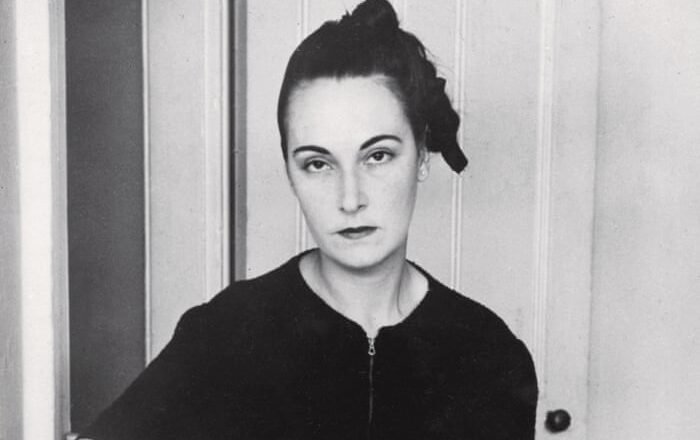 The art world is mourning a woman of uncommon resilience, Cuban-born Carmen Herrera. She died on February 12, 2022, at age 106 in New York, where she had painted for decades in obscurity.
Hers is a remarkable story, one that belies our culture’s feeding frenzy for the next hot trend.
Recognition came late to Herrera. Really late. She began selling her paintings at age 89, reports the New York Times in her obituary.
Today Carmen Herrera  (1915 – 2022) is represented by Lisson Gallery, with locations in London, New York, and Shanghai. According to the gallery’s website, her work is in public and private collections, as well as museums in the United States, United Kingdom, Germany, and United Arab Emirates. These include Museum of Modern Art, El Museo del Barrio, Pérez Art Museum Miami, and Smithsonian American Art Museum.
Herrera’s abstract paintings are marked by clean, vivid geometric forms that seem to hover in space. Rectangles, triangles and circles may interlock as if marking steps in a dance; otherwise they pierce space with a dramatic solo gesture. Geometric abstraction thrived on her canvases, suffused with elegant simplicity.
Learning the news that this once little-known and now widely recognized artist Carmen Herrera has died, I remember how Miami played a role in her late recognition.
In 2005, following a 2004 group gallery show in New York that drew the attention of influential collectors, Herrera received what was billed as her first major retrospective at Miami Art Central (MAC), an innovative institution here since closed. This exhibit was “The Forms of Silence: Carmen Herrera Abstract Works, 1948-1987,” curated by MAC director Rina Carvajal.
For Jitney Books I have edited and condensed my 2005 Miami Herald review of that Herrera retrospective. The review is taken from my personal archive of work as an art critic for the Miami Herald.

Carmen Herrera had a career that stretches back to late 1940s Paris, but today she’s virtually unknown except to a rarefied group of art world cognoscenti that include the curatorial staff at El Museo del Barrio and New York Times critics.

For all the attention that Latin American artists have enjoyed in the past 15 years or so, with the flowering of Fridamania and significant shows like the watershed exhibit “Latin American Artists of the 20th Century” in 1993 at New York’s Museum of Modern Art, mention Carmen Herrera’s name to many reasonably well-informed folks and you’ll be met with silence.

Herrera did not make it into the MOMA show. “I went to New York and saw her work about 10 months ago and I couldn’t understand why someone of this caliber wasn’t better known,” says Miami Art Central director Rina Carvajal.

Since the late 1990s, Herrera has exhibited sporadically at a handful of venues in New York, Toronto, Paris and Havana. In 1998, her black-and-white paintings at New York’s El Museo del Barrio were favorably reviewed.

The artist’s vibrantly ordered abstract geometric paintings were also included in Outside Cuba, the 1987 exhibit that traveled to Miami after opening at the Jane Vorhees Zimmerli Art Museum at Rutgers University, and in the 1988 Latin American Spirit: Art and Artists in the United States, 1920-1970 that opened at the Bronx Museum of the Arts.

But since then, there’s been almost a virtual silence, something Carvajal hopes will change with the MAC exhibit. The MAC director said she has recently fielded inquiries about Herrera from London’s Tate Gallery, England’s prime showcase for contemporary art.

Carvajal, who joined MAC in July 2004 as its executive director and chief curator, sees this show as part of a larger effort. “Our mission,” she says of MAC, “is to do international art from everywhere, but being in Miami it’s also time to do Latin American artists that need acknowledgement.”

Even with that 1993 Museum of Modern Art exhibit, she says that “there were stereotypes still, even though you could see the richness of these artists. There was an expectation of what Latin American artists could paint. They had to be colorful, they had to be figurative.” 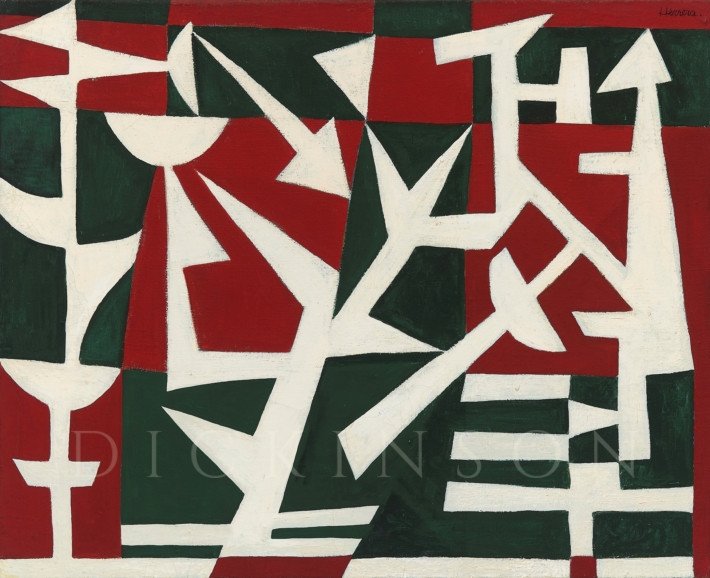 In an 11-minute documentary about Herrera’s life and career that MAC prepared in the artist’s downtown New York loft and neighborhood in August, a white-haired, arthritic, but gamely persistent and quietly eloquent Herrera talks about making art in the post-war years when stereotypical expectations about Latin American artists were especially dominant.

The documentary begins as the artist, who has lived in New York since 1952, recalls being visited years ago by a prominent art dealer who gave the artist this blunt message: I can’t represent you because you are a woman and you are Latin American.

This unnamed art dealer nevertheless admitted, Herrera recalls, ” ‘You are a wonderful painter. You can paint circles around the artists I have in this gallery.’ ”

Surprisingly enough, in the documentary Herrera does not come across as bitter. She actually says that she welcomed the years of ensuing silence, because she always wanted “absolute silence, absolute quiet” while painting, and her art does project a cool, meditative state that’s far from the emotional, gestural blizzard of dripped paint in works by Jackson Pollock or in the Pop Art cleverness of Andy Warhol, two of the many mostly male artists who reaped noisy success in New York while she quietly painted away.

Her 1998 exhibit of the geometrical, optically charged black-and-white paintings, like “Verticals” and “Untitled” (both from 1952) at El Museo del Barrio was an education to many. Art historian Juan Martinez, who teaches at Florida International University, admits that he first learned of her work from that show back in 1998.

In the closing reception for this exhibit, he will discuss abstraction in Cuban art in the middle years of the 20th century. In researching his book “Cuban Art and National Identity: The Vanguardia Painters, 1927-1950” (University Press of Florida), Martinez says he found no mention of Herrera among the many catalogs and gallery announcements he reviewed.

Born in Havana in 1915, Herrera was trained at the school of architecture at the University of Havana. The angular joints and open spaces of architecture are clearly part of her vision of abstraction, which quietly contrasts a sense of space that moves forward with one that recedes, but she also cites the painter and pioneering Modernist Amelia Peláez as an important influence.

From 1949 to 1952, she lived and worked in Paris. Annually she showed in Paris in the Salon des Réalitiés Nouvelles, considered the most important venue for reintroducing abstract art to an audience badly shaken by the horrors of World War II.

Paris was the busy place where, she says in the MAC documentary, “I found my way in painting.” There she encountered a book about luminous squares in the abstract painting of Josef Albers, the German-born artist who was one of the first of influential Bauhaus artists to move to the United States in the wake of the Nazis. After the luminous squares of Albers in Paris, there were the long, overlooked years in New York when Herrera continued to paint in “absolute silence, absolute quiet.”