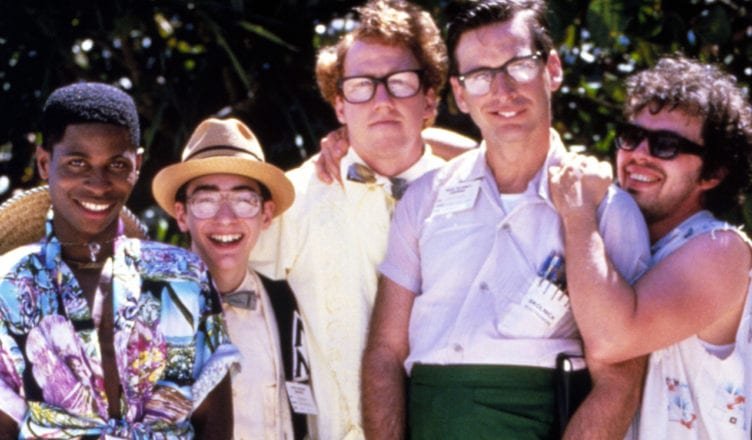 There is no recorded rationale on why so many sequels from the great cinematic decade of the 1980’s were filmed in South Florida. Was there some hush-hush government subsidy? Were the film crews down here especially talented? Was it as simple as the producers of the movies loved cocaine so they said let’s have Part 2 of our beloved movie take place as close as possible to mountains of blow? We may never know. But here’s an exhaustive if incomplete list of cheesy 1980’s movie sequels filmed in South Florida.

The 1988 fifth edition of this masterpiece of a franchise had to say good-bye to Steve Guttenberg and Bobcat Goldthwait, but don’t worry all your other bumbling cop pals from the earlier movies are present.  Commandant Lassard wins “Police Officer of the Decade,” award and brings down Officers Hightower, Jones, Tackleberry and the rest of the gang for some hi-jinks including a mandatory airboat chase scene.

Kind of a cheat as the two earlier Porky movies were also filmed in South Florida, but the 1985 Porky’s Revenge  is probably the silliest of the three silly teenage sex comedies and so deserves a place on the list. Based on director Bob Clark’s adolescent misadventures as a Fort Lauderdale high school student, Porky’s Revenge has the kids sneaking around to foil the Everglades gambling kingpin Porky from putting the hurt on their basketball coach. Loads of nudity and politically incorrect humor ensue.

Revenge of the Nerds II: Nerds in Paradise

Even more revenge! The nerds of the  Lambda Lambda Lambdas fraternity head to Fort Lauderdale for Spring Break for a national fraternity convention in this 1987 sequel. But Fort Lauderdale does not take kindly to nerds. The frats mock them, the ladies reject them, and even the hotel manager refuses them a room as South Florida does not offer equal protection to nerds. But don’t worry, in the end, the nerds will have the last, if annoying laugh.

Perhaps this 1988 sequel got the blandest of titles, because Old Nerds in Paradise was too on the nose. WIlford Brimley, Jessica Tandy, Don Ameche, and every other elderly actor from the 1980’s return from space to Key Biscayne with a youthful vigor for some breakdancing and basketball that favored slapstick over sentimentality.

Filmed in Davie and Coral Springs Caddyshack II from 1988 doesn’t have the same cache as the beloved original. That will happen when you replace Rodney Dangerfield and Bill Murray for Jackie Mason and Dan Aykroyd. In fact only Chevy Chase and Kenny Loggins singing a new theme song are back from the original. But hey the animatronic gopher is back too, and he’s drinking beer.