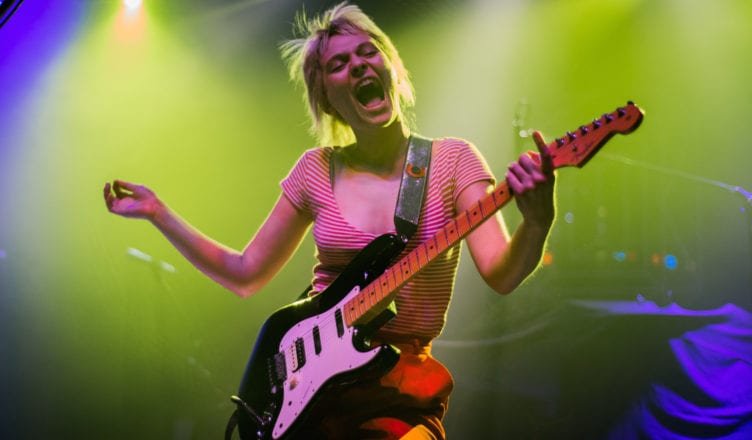 It had been raining in Asheville for a few days. Downpours. Super wet and gray. And then, around sunset, the skies split open and melt with radiance and layered colorful kaleidoscopic sunset beauty. Just in time for the Cherry Glazerr concert. Yay! Good vibes.

Cherry Glazerr is a three piece rock band from Los Angeles. They’re good, young and driven. Raw and risque. Fun. You wouldn’t believe Cherry Glazerr have been around for six years but it’s true. The current lineup consists of guitarist and lead vocalist Clementine Creevy, bassist Devin O’Brien and drummer Tabor Allen. We heard of the band from Sirius Radio, songs like “Daddi” and “Told You I’d Be With The Guys” have been getting airplay.

They don’t tour a lot, having played in LA last week, and Asheville and Nashville this week. They’re gigging at Woodstock, Austin City Lights, some shows in Europe.

The show in Asheville was surprisingly mixed in age. This wasn’t a Khalid show with a bunch of sixteen year old’s spitting all the lyrics. There were people of all ages in attendance and everyone enjoyed the 60 minute set.

Lead singer and guitarist Clementine Creevy  (22 or 23 years old) gives off a Joan Jett, retro rock vibe. She’s a dope musician and personality. Her vocals at the show could’ve been sound engineered better, but whatever, not on her. 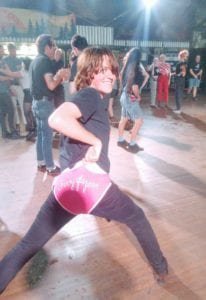 After the show, she came out for a meet and greet for about 30 fans that hung around.

Catch Cherry Glazer if you  can. They’ll keep you nodding that noggin.

And when they blow up, you’ll be all like, I remember when…

White’s Not My Color

Encore: Told You I’d Be With the Guys