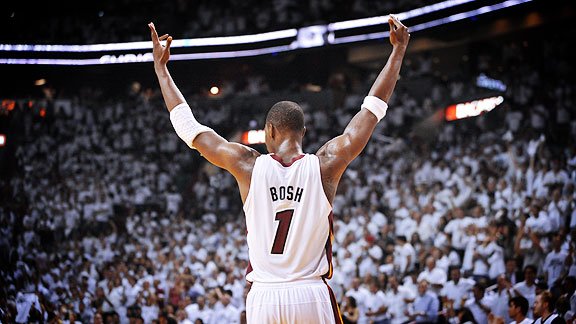 With former Heat championship teammates Ray Allen, Dwyane Wade and LeBron James looking on, Bosh showed humility, wisdom, and a great sense of humor. He was always the most humble of the Miami Heat’s Big Three. But it truly was touching to see him relay his amazing basketball journey from such a high pedestal. Those who followed his career also know he had a funny bone. He demonstrated it in that giant pep rally when he signed with the Heat and in postgame interviews where he would photobomb his teammates. But it was still jarring to see how on point Bosh’s comic timing was in his speech.

Chris Bosh touches on his many steps in his basketball journey. From his youth in Texas to his year in college at Georgia Tech. To playing for the Toronto Raptors and the Olympic basketball team to finishing his career with the Miami Heat. He looks so young and healthy on stage, you forget until he poignantly mentions it that his career was unfairly cut short by blood clots that forced him to retire at the much too young age of 31.

You can watch Chris Bosh’s full seventeen minute speech below. It’s a must see for any Miami Heat fan. Most NBA fans will also find it worth their while to watch it. But really I think anyone with a tinge of humanity will get something out of this speech.