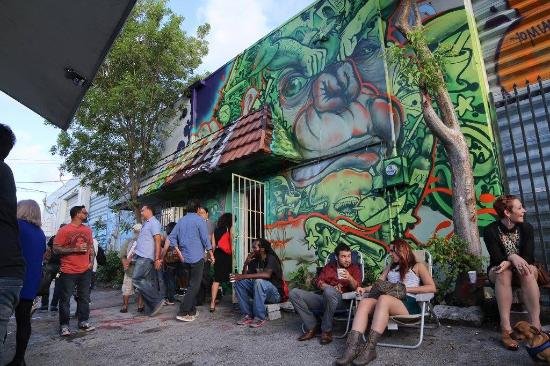 This past Thursday, June 27, I spent nine hours of my life sitting in a seat at City Hall, listening to all manner of issues being discussed, just for the opportunity to finally be given two minutes to speak in front of the commissioners who would decide the fate of the neighborhood that I’ve been a part of for over ten years. And in the end, as will happen the majority of the time, money spoke louder than any logic or appeal to decency could. The three commissioners who lasted late into the night, unanimously voted to approve the SAP (Special Area Plan) application for the Magic City Innovation District, essentially granting them an unfair competitive advantage over the dozens if not hundreds of property and small business owners that surround them.

I can’t say I’m surprised, despite my disappointment the day after the vote; especially in Commissioner Hardemon, the supposed defender of Little Haiti, who took every opportunity to tear down the arguments made by the representatives of two residents in the neighborhood who were filing for intervenor status (a person whose interests in the proceeding are adversely affected in a manner greater than those of the general public). This would have given these people the opportunity to have a seat at the table and force the developers to listen to their concerns directly, but instead Hardemon made it clear he had no intention of letting that happen.

Throughout the entire nine hour period that I was sitting in the chamber where the meeting occurred, I noticed time and time again the main partners from Magic City and their legal council pacing the hallways of the city offices which have windows facing into the chamber. I wondered how they were allowed to access those areas after hours and whether someone like me with no clout would be afforded the same luxury.

And it’s no different throughout the extended period during which the developers are pushing through their projects at the city. I’ve sat for literal hours at the zoning or building departments and watched the developers’ land use attorneys and expeditors waltz back and see members of the staff seemingly without needing to deal with the due process of waiting their turn on a list like the rest of us. I guess I don’t bring enough cafecito with me to share when I go.

Developers are getting preferential access to the gatekeepers of our legislation, favors and priority for their projects, putting them ahead of the small business and property owners who have sunk blood, sweat, tears and dollars into the community for decades. And why? Solely because their pockets are deep enough to afford the lackies that do the legwork for them while they concentrate on building buzz around the next neighborhood they set their sights on?

They don’t add any real value, other than slapping a facelift on some of their properties, and enticing creative tenants to move in by offering free or cheap rents with short term leases. Once those tenants actually start building a community around them in the neighborhood, it gives them the opportunity to capitalize on the inevitable PR that those businesses get, and entice larger investors/tenants to come in at exorbitant prices that would never be sustainable for the existing tenants’ uses.

And so inevitably the community/culture that the big money buys into disappears, and they’re left holding a bag of poop and wondering why no one wants it. They sell the illusion of culture to people who hunger for it because they have no idea what it actually takes to have it, and have spent all their lives believing in smoke and mirrors.

within a neglected area. This isn’t the case in Little Haiti. It was an inevitability that the neighborhood would improve because of a variety of factors including location and sea level rise . Whether the developers came in and bought the properties they did was irrelevant to that progress occuring. They like to brag about things like affordable housing (which is just a bureaucratic term, which in practice doesn’t actually serve poor people, but people with incomes up to $50k, plus people end up on waitlists for years just to maybe be able to take advantage of those) or jobs (working 5 days a week adjacent to the Magic City properties being renovated, I’ve seen maybe 5 Haitians working on the crews doing the work in the last year or so).

But in the end it’s about responsible development of a community which has a real identity and soul within it that should be preserved for as long as possible. I doubt it can be done in permanence, but we can at least keep it alive for decades rather than a paltry handful of years.

Metro1 (one of the 3 principal partners behind Magic City, along with someone mixed up in the college bribery scandal) claims to shape neighborhoods; and that’s true, they do. But unfortunately they do it in their own image: a soulless facade propped up by other people’s money and columns of their own  PR which pushes property values up beyond their real organic potential.

The other big agenda item that came under discussion during the nine hour wait was related to the Babylon property in Brickell. Commissioner Russell was especially vehement that this property not be given special liberties and the ability to build too much higher than the surrounding properties there. Most of the buildings in that area are around 20 stories high, and he was opposed to the land owners getting the right to build as high as 48 stories, instead maintaining that 20 should be more than enough. And yet here the commission is approving an SAP which will allow the Magic City team to build over 20 stories, in a neighborhood of predominantly one to three story buildings. Commissioner Russell himself argued that Brickell Key needed a master plan, and not to be piecemeal rezoning properties as developers attempt to build higher. And yet that is exactly what they have set the precedent for in Little Haiti, within the same meeting no less.

So question is, what sets areas like Brickell Key or Little Havana apart from Little Haiti? What determines which areas developers are able to exploit to their heart’s content and which they have to tread carefully in?