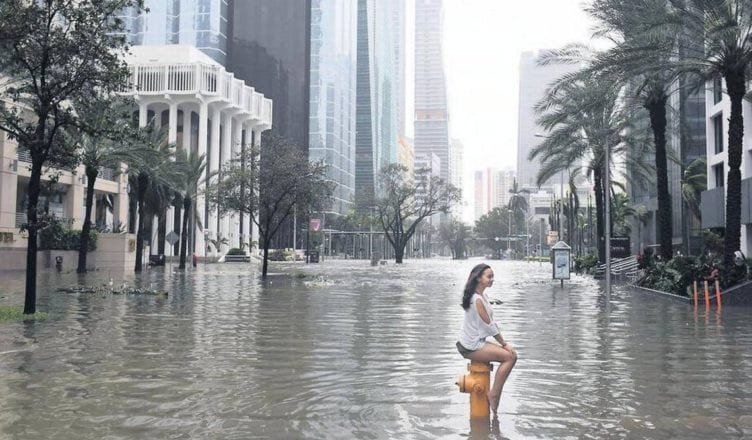 Eva Paulus is our resident Marine Biologist. Today’s issue is Climate Change in Miami. We call this column “Eva explains why the world is going to sh*t and you need to see coral reefs today or never again.”

In Miami, climate change is old news. Everybody has had to wade through knee-deep water to get to their cars after a rainfall. We are all aware that Miami Beach is using highly sophisticated pumps imported from the Netherlands to delay the inevitable – it will succumb to sea level rise. Why do we still build high-rises there then, you ask? Well, because money.

Unfortunately, most people with money don’t care about what is going to happen to the planet, the orangutans, tigers, sharks, or whales. They just want more money.

Right now, our oceans are warming up. If you’ve been to the beach in Miami in July or August, you know the ocean is extremely warm. What feels like a personal spa is affecting the organisms that cannot take a cold shower afterwards in a very different way.

Imagine everything that lives in the ocean is adapted to a certain temperature, and then the heat gets turned on. It’s like they’re constantly in distress because to them it is like having a fever. And the fever rises, until it reaches critical levels. But nobody is going to the ER to give them antibiotics. That’s because we were supposed to give them antibiotics long before it got to this point. Instead, we were busy debating whether Game of Thrones had a good ending.

And also, who are we to worry about these things, right?

Of course, there are other important issues the world is tackling right now, but unless we solve this one big one, it won’t matter if the last two seasons of Game of Thrones are re-shot or not, because -newsflash- we will all be freaking dead.

We need to change our habits. We need better public transport in the major cities, more initiatives for renewable energy, we need more pressure on large corporations with huge CO2 emissions, we need to reduce the amount of meat and fish we eat. We cannot let the hopelessness that overcomes us sometimes weigh us down. And we have to start today.