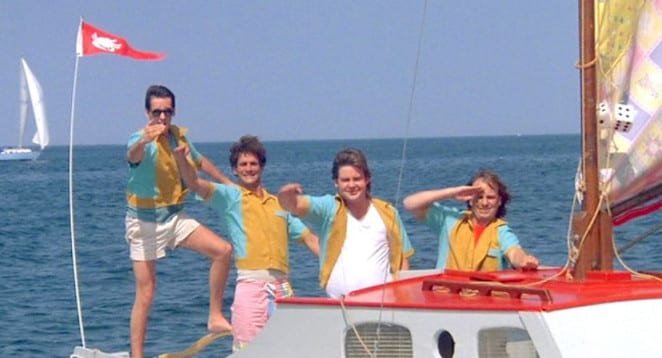 I get e-mails from time to time advertising special deals. Go eat at this restaurant for twenty dollars. Stay at that hotel for a hundred bucks. Get a massage with a happy ending for fifty bucks. Mostly I delete these e-mails without reading them. But one caught my attention. Go sailing and snorkeling for twenty five dollars. That sounded like fun. So I bought a pair of tickets for myself and my love interest.

Getting on the boat was a minor miracle as there were several restrictions. The deal was not applicable on holiday weekends including Ramadan. You could not board the boat on full moons, new moons, or half moons and you had to make a reservation at least ten days in advance, but no more than eleven days in advance.

Finally we were granted passage on the hefty sailboat. It was not until all the passengers boarded that I was aware what I had gotten us into. This was a party boat complete with club music blasting at a thousand decibels. The Captain gave us an orientation which included the reminders to drink plenty of water, not to dance on the tables, and to only stand next to him if you were a single lady willing to put out.

Then we headed out to sea.

The boat was powered by a motor until we passed the port of Miami. Then they set the sails through the mast and except for LMFAO singing “Shots Shots Shots Shots” we could almost feel lost at sea. Many of the passengers were following the commands of the song. Pounding down glass after glass of alcohol. Most notable was a guy too big for his orange and blue bathing suit. It was less in the form of a Speedo and more reminiscent of those Luke Skywalker Underoos I wore as a four year old. They might have even been the same pair, because they could barely contain this man.

One of my reasons for signing us up for this boat ride was our destination was to be a coral reef.  But when I asked the Captain where exactly the reef was he informed me the Coast Guard barred us from that part of the sea. So we anchored in the middle of the ocean with nothing beneath us, but the sea floor. There was still fun to be had. We could dive ten feet off the side of the boat and the party conductor set  up a trampoline in the water.

I got in line to get on the trampoline which a 300 pound woman was struggling to climb atop of. Being an able bodied seemingly healthy man others in the line suggested that I should be the one to help her up. I pretended I could not hear their requests. I had visions of her falling on me breaking my back and her ankle leaving both of us stuck on this trampoline in the middle of the sea. She would have gas which she could not hold  and a helicopter would have to be called in to airlift me toward medical attention.

A more charitable soul ended up helping the lady onto the trampoline without any incident except for the lady having fun.

When we got back on the boat I told my love interest of my cowardice. She said if it was one of these hot chicks in their little bikinis I would have run to help them onto the trampoline.

“I’m no idiot.” I told her. “You’d kick my butt if I did that. I would have behaved the same exact cowardly way.”

I looked over at the guy in the orange and blue bathing suit who had his face between a woman’s two breasts.

On the way back to port they played a more agreeable reggae soundtrack that allowed us to enjoy our remaining time at sea. When they docked the  boat  ashore, we lined up to get off. With the elevated deck there was a slight leap one had to make to get on the pier. The Captain had his hand out to help people  safely get on shore.

The guy disembarking in front of me eschewed the help and almost fell as he walked off. The Captain chastised him, “You’re scared to touch a man and look what happens, you nearly eat it!”

And before this excursion I always thought people went out to sea to avoid human contact.