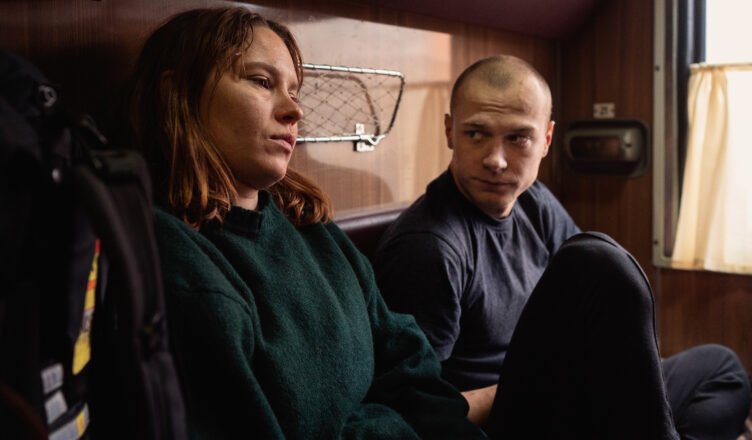 I just saw two really fun movies that show why no sane writer would set a story in 2022. The present is always changing. With the way our modern world is if a story is set in the now, a movie filmed in the past will have no chance of catching up.

And so the great, new Russian-Finnish production Compartment No. 6 takes place in some unspecified yesteryear. Maybe 1997 or perhaps 2001. People are still using pay phones, and traveling with mini-camcorders rather than filming with their cell phones. No one yet has to wear a facemask, even though much of the movie takes place in the coldest of temperatures.

Compartment No. 6 tells the story of Laura, a Finnish student taking a Russian train to the Arctic Circle. Perhaps you are old enough to remember that 1995  movie Before Sunrise  where Julie Delpy and Ethan Hawke fall in love on a train ride through Europe over the course of a day? Imagine a much, much longer train ride where the guy is a sociopath and  you get a feel for the low-key charms of this unlikely romance.

And when I say this movie is a romance, I don’t just mean between the two protagonists. The real romanticism is towards travelling. Anyone who has ever boarded a train  by themselves, can identify with a trip going completely off the rails that reminds you the root word of misadventure is adventure. And with its clever ending Compartment No. 6 will have you researching how much prices for a Eurail pass have inflated to in our dreary present.

Disney has long featured princesses who wished that someday their prince would come, but this is not Frozen‘s Anna having an abstract crush on a prince. Turning Red features girls who doodle themselves in a boy’s loving embrace and ogle classmates in basketball practice.

Turning Red is set in 2002, when eighth grader Mei learns she comes from a long line of women who whenever they get passionate transform into a giant red panda. It doesn’t take an English lit major to get the metamorphosis is a metaphor for the changes a body, mind, and libido take in puberty.

But I suppose there is a cliché that turn around is fair play. When I was eight I saw Teen Wolf which this movie is clearly indebted to. In that movie Michael J. Fox’s spirit animal that represented the added hair and sex drive of adolescence was a wolf. Teen Wolf and his friends were even hornier, than Mei and her gang. But even after endless viewings of that movie it took me many years to think of girls as figures of desire.

So maybe us prude parents don’t have anything to worry about that this new flick will pre-maturely turn their children toward lust.

I can now see the trigger warning was actually right there in the title.

Why else would they call it,  Turning Red other than that’s the color Dads’ faces will turn when watching it with their tweenaged daughters.