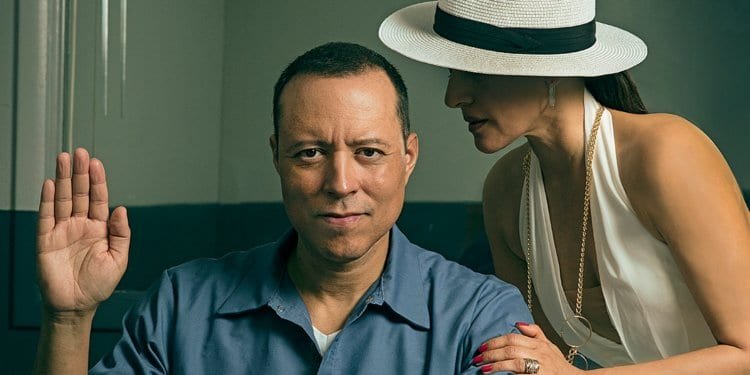 As someone who was a teenager in the late 1970’s in South Florida I have a confession to make. In 1979 I was a 15 year old pot smoker that no way could have missed the blizzard that hit Miami and its surroundings. It is so fondly remembered the one day it snowed in Miami in 1977 but we seem to forget in the next few years the streets were blanketed with baggies of snow from gram size to kilos. Lucky for me I kicked the habit after watching a guy make freebase in front of me. It was small time in my neighborhood but one high school friend ended up dead with his throat slashed.

Confessions Of A Cocaine Cowboy is a new play brought to you by Billy Corben, Aurin Squire and Miami New Drama. Mr. Corben if you may recall 13 years ago after many years of investigation introduced us to the infamous underground Miami characters in the documentary Cocaine Cowboys. The people he got to talk and the stories they told were legendary and he sort of uncovered a part of Miami’s history that was swept under the rug. After years of shopping it around for a possible movie or TV production the rights were returned to further explore the subject and these characters.

For the next three weekends (Thursday-Sunday) through April 7 you have an opportunity to catch the eye popping, jaw dropping play at The Colony Theatre on Miami Beach. The Colony is a gem of retro and preservation that deserves a nod for still existing in the midst of the shopping mall Miami Beach has become. Also for putting on such daring performances.

Confessions of a Cocaine Cowboy

The play starts with a warning: gunfire, strobe lights, strong language, violence, blood and other Florida fuckery will be experienced during this performance. Then it starts with a bang. Yancey Arias plays Rivi fabulously. If you have seen Cocaine Cowboys (the film) Rivi nonchalantly admits to many more murders than he is in jail for. The actor plays him with the same smug gentleness that makes him so eerie. As much as the documentary is shocking, the play is a dark comedy of sorts. Most of the cast plays dual parts other than Mr. Arias and all are great. None better than Zilah Mendoza’s portrayal of State’s Attorney Kathy (Kathrine Fernandez Rundle) and the Godmother of Cocaine Griselda Blanco though. She nails the two different characters that bookend Rivi’s life superbly.

There are so many facts laid out in this play that I hope not only the Miami audience pays attention, but future audiences in other towns do too. How many screw ups police, mobsters and the court system made during this time and how much money and cocaine came through our shores and disrupted our city? I hope viewers also pay attention to the set design with its police files, kilos of cocaine, arms, electric chair and more. You will come out of it also with the knowledge many things may not have really changed in the Wild West that is known as the Deep City.

Don’t forget, the Sunshine State was built on snow.