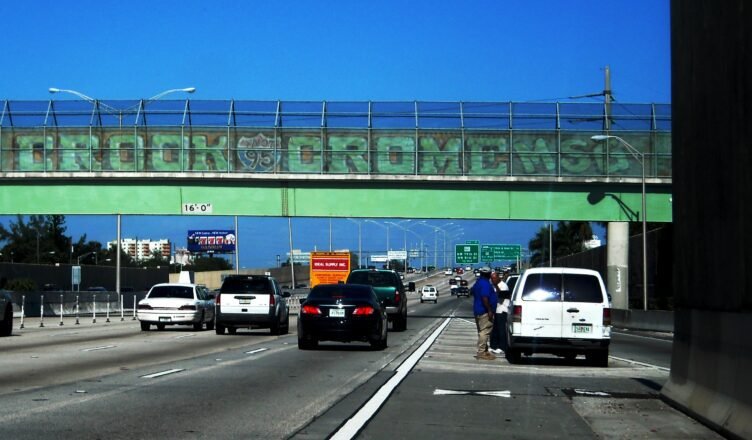 As Wynwood completes the last stage of the gentrification cycle (glass condos and “curated” clothing shops), it’s worth remembering that it wasn’t always so. A run-down manufacturing hub beset by crime and kept afloat by mom-and-pop shops proved to be fertile ground for artists and developers always on the lookout for the next big thing. The world-famous murals and colorful social media backgrounds we see today had humble beginnings before the turn of the millennium. In this excerpt from his upcoming  book “The Cipher- A History of Hip Hop“, author John Cordero gives a snapshot of Miami’s street art and graffiti scene in the late 90’s, when two writers, Crook and Crome, achieved the impossible and planted the seed for the Wynwood we see today.

1998: The year Crook and Crome from MSG crew achieved infamy in South Florida by bombing everything in sight. Walls, trucks, freight trains, overpasses, rooftops, expressway signs, the heavens, no surface was safe from the spray cans wielded by the Miami Style Graffers.  By the late 90’s, the amount of artistic vandalism was so serious that according to WLRN “Graffiti was a regular issue at commission meetings and town hall meetings. Graffiti on the highways prompted the Florida Department of Transportation to set aside a budget of over $130,000 to clean up tags on highway signs. There was also a hotline to report anyone seen doing graffiti.”

Meanwhile, every writer and head in town was amazed at the exploits of the dynamic duo who were fearless and winning the war against the buff.  The Miami New Times reported: “Crook and Crome hit signs and walls along the highways harder than anybody had before.” The weekly continued: “They made their straight-letters large and clear enough for civilians to decipher. Local news stations heaped them with publicity. When a WPLG-10 reporter kept referring to “Crookcrome” as one person, Crome sent a lackey to the camera setup to whisper truth in the newsman’s ear.”

“We were spray painting everything from highway signs to curbs, and every little thing you could think of we were doing.” Crome told 24hourhiphop.com.  “Some nights we would focus on Hialeah, the next night we would focus on Broward, and the next day it would be Palm Beach. Sometimes we would bust out a map and plan out our attack for the week so we could really cover a whole city. We would hit up all kinds of places and people realized that we were everywhere. We even went to Orlando on occasions. We definitely knew it was getting heated and that people were out to stop us.” 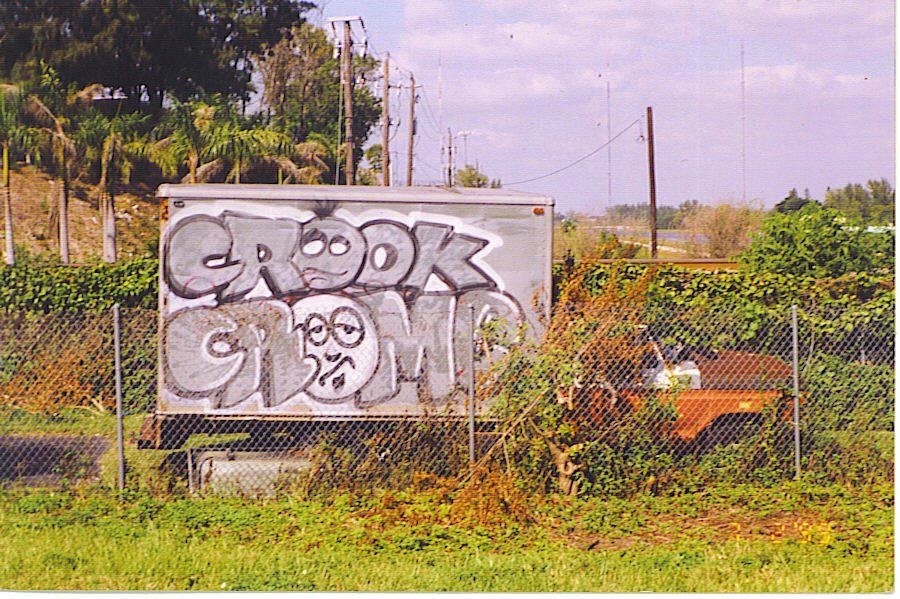 What kind of people?

On March 10th, 1999, Miami PD raided their apartment on Biscayne and 25th St., where they arrested Crook without incident.  “They say they’re here to pick me up for attempted murder” He told Beyond Extreme magazine.  “But if I tell them about this whole graffiti thing, they will get the charges dropped.” Keep in mind that these are supposed to be Miami’s finest.  “I was amazed at how stupid these fuckin pigs were.  No search warrants, no case.”

The whole spectacle was just for show.  “Every fuckin news station in Miami was there.” He said.  “Channel 4, 6, 7, 10, 33, 39, even the fuckin Spanish channels.  By the way, them Telemundo motherfuckers are a bunch of assholes.”  Crome, upon hearing of the raid and arrest, went into hiding, then to Atlanta, and finally turned himself in around six months later. He recalls: “I ended up staying with my friend in Broward for the night. As we were driving we drove by one of the walls that we had done and we saw the news crews in front of them. I realized that this shit was serious.”

Clearly, this wasn’t just another vandalism charge: “As soon as I got to my friend’s crib in Broward I turned on the news and the main story was Crook. They showed him locked up. They were showing pictures of me on the television and they said that I was still on the loose but they expected to have me in custody by the end of the night.”

Meanwhile, the Dade County D.A. asked for Crook’s bail to be set at ONE MILLION DOLLARS! For graffiti! But Crome had other plans:  “I ended up heading out to Atlanta to chill for a while and I heard that they tried giving Crook a million dollar bond. The judge said they were crazy and that he didn’t even give kingpins, drug traffickers, or real criminals that kind of bond. The judge gave him a $50,000 bond and that was still too much. The prosecutors kept acting like we couldn’t be controlled and that we were some kind of maniacs who were going to terrorize the streets if we were set loose. In reality we were just a couple of graffiti artists and everything was really overblown.”

In the end, Crook ended up serving 7 months before his case was dismissed due to police raiding his apartment without a warrant.  Crome also did a few weeks before charges against him were also dropped due to illegal search and seizure. 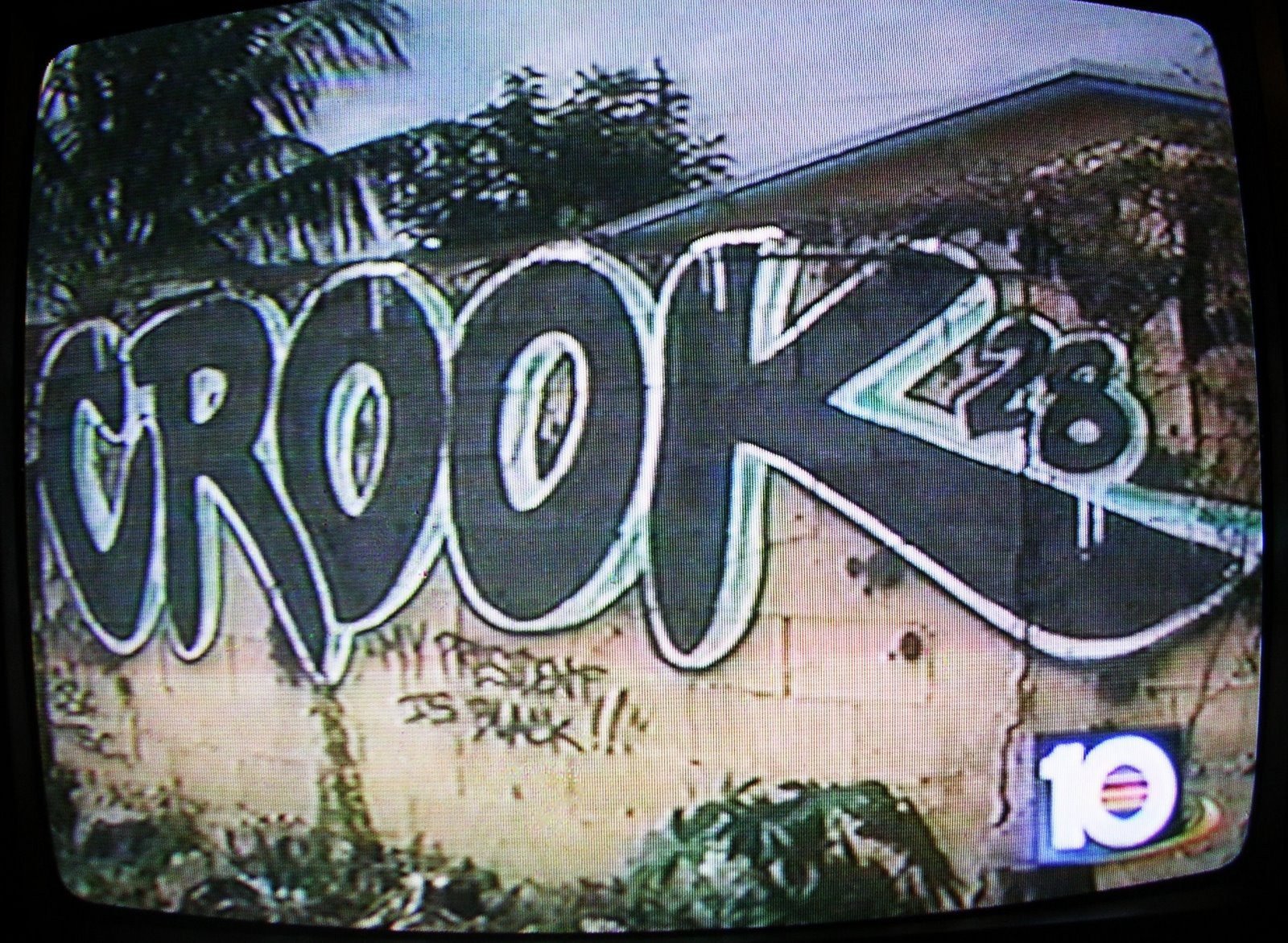 However, the message was loud and clear: stop graffiti at all costs.

And that’s exactly what happened.  Once writers and bombers saw that you could end up as the lead story on the 10 o’clock news with a million dollar bond over your head, illegal graffiti all but disappeared in South Florida.  Within a couple of years following the Crook and Crome saga, all the big penits were demolished, the final nail in the coffin for Miami’s golden age.

Nowadays, there’s scattered tags and get ups throughout the city, and you can safely walk in Wynwood with police officers posted on every corner as you take flicks with your smartphone, which you will not get jacked for, of block-long productions painted by top graffiti writers and muralists from around the globe, including Crook and Crome.  But the days of free for all penits and nearly every available surface tagged, bombed, and pieced up are long gone.

As Crook says “Miami is a tourist town.  Millions and millions of dollars come from people who don’t live here.  They come here for a few days…they do not want graffiti all over the place.  Shows that they don’t have control. I’ll tell you one thing: Miami will never tolerate graffiti.”  That is, unless it’s in the specially designated Wynwood Art District, where Art Basel pink pants wearing connoisseurs and hipsters can patronize food trucks and Snapchat filter to death.

From 1998 to 2000, Mr. Cordero aka omen co-founded, edited, and published “The Cipher: Miami’s Hip Hop Newspaper” an independent monthly publication that chronicled the emerging Hip-Hop scene in South Florida. His book "The Cipher: A History of Hip Hop" in Miami is slated to be released in February 2023 by Microcosm Publishing.

View all posts by John Cordero →