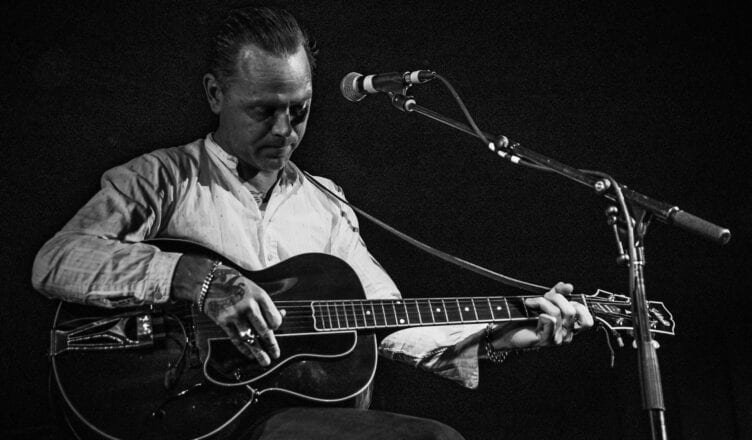 The Australian-bred musician will take you to another era, with ease. He blessed us recently at Gramps Miami for a very intimate 90-minute set.

In Miami he played about twenty tracks to a crowd of around 40, but it certainly sounded like a lot more after the ovation of every song.

CW Stoneking is on a North American tour, solo. Just him, amazing story-telling lyrics and an acoustic guitar. No band this time.

You probably never heard of this cat.

Listen to his music and go to the show.

It’s easy to compare C.W. to all sorts depending on your aesthetics and background. To us, he sounded like Cab Calloway & Tom Waits, but no doubt Southern Blues in the ol’ Roaring 20’s. But original.

Anyway these are the new Roaring 2020’s.

CW Stoneking is a storyteller. His lyrics will keep you captivated, almost frozen. You probably won’t dance but you will move and nod to his bittersweet blues. Dude definitely has a jungle vibe in his lyrics, often using Africa or some jungle as a setting. Wild.

His strumming, plucking guitar skills carry the lyrics into the air with a bouncy, sorrowful simplistic ease. Some New Orleans heads probably hear talent like this on the regular, but most of us don’t.

If you can catch this show, do it.

It’s a one-man gig but certainly does not  feel like it.

Tickets were $15 dollars and the vibe was tight. Look out for a show near you. Details below.

editor’s note — This gentleman is named is C.W. not CW