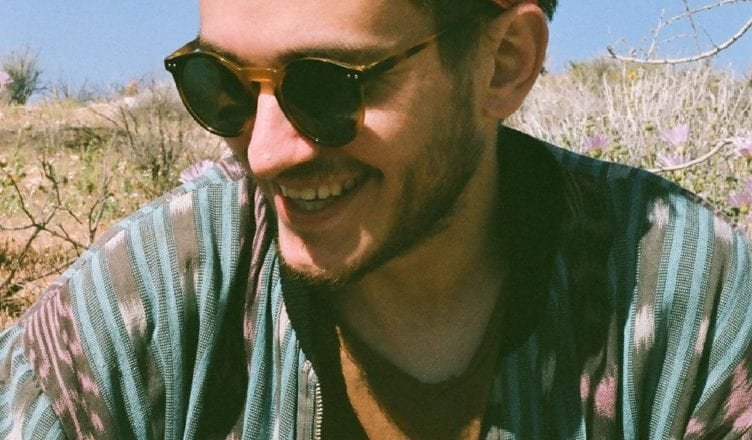 Corey Perez who also goes by DC Perez is a one man band with two samplers and a mic. Besides his solo project he can also be seen as a member of many Miami bands like Rick Moon, Nick County and the Rainbow Smoke, The Unknown Legends and touring groups like Ben Katzman’s DeGreaser. He is a talented multi-instrumentalist as well as a natural arranger and producer.
Corey’s musical background stems from his father, Rudy Perez, a well known producer and songwriter who has worked with some of the biggest names in the business like Burt Bacharach and Beyonce. When Corey was 15, he played with his brothers in a band called Price, that was signed to Geffen Records. They wrote songs for movie soundtracks but disbanded in 2009. His brother Chris Price, the oldest of the siblings, continues to write and produce for artists like Emmit Rhodes and Linda Perhacs.
On December 15 you will get a chance to see him perform as solo project DC Perez and as a backing member with Rick Moon. Also performing that night will be County Gold and Jaialai, a free show not to be missed! Corey is currently recording original music he plans to release next year and we got to ask him a few questions about his practice.

Oly: What was the first concert you ever attended?


DC Perez: I’m pretty sure the first concert I ever went to was some sort of Power 96 thing where a bunch of acts played. I mostly remember Montell Jordan, being there. I was a huge fan of “This Is How We Do It”. I still am a huge fan of that song.

What were you like in school, were you a good or bad kid?

I don’t think I showed up to class enough to be one way or the other.

Your family is very musical, is that how you started playing music? How does that tie in to your musical foundation?

Music has always been natural to me. I was practically born in a recording studio with music in my blood. And it’s the same way for my three brothers. We’ve just always been able to play some. It’s an instinctive thing.

Your dad is a well known producer. Has that been enabling or a crutch?

I’m blessed to be my father’s son. I grew up fortunate to be surrounded by love and support from both my parents. I learned a lot; anytime I’d watch my dad work in the studio. He produces a lot of talented artists from all over the world, and that was a great environment for a kid like me to grow up in.

You were signed to Geffen Records with your brothers in a band called Price. Tell me about that and what happened with that band. How old were you? How has that experience changed you?

By the time I was fifteen, my two older brothers and I had come together to form a band and started playing a lot around town here in Miami. That led to making a demo tape, and then my older brother Chris went out to South By Southwest and shopped our tape to any A&R or label representative who would meet with him. From there we got offers to showcase for some labels and the meeting we had with the Geffen people went really well. So we moved out to LA and that was that. When a major record label like Geffen, who put out artists like Nirvana and Beck, wants to sign you and put those kind of resources behind you, it’s an incredibly seductive thing. Especially for an eager teenager hell bent on showing the world what he’s made of. But the timing was just awful. The whole music business was just dead in the water and they were squeamish about putting money behind a band that they didn’t really know how to market. So the whole thing kind of fell apart by the time I was eighteen, and I took a big L. I was young and naive and thought that all I had to do was handle my part of the job, and that the powers that be would figure the rest of it out. I stood on the sidelines and watched the clock run out. That’s definitely the lesson I took from the whole experience. Collaboration is key and nobody does it alone, but as an artist you cannot be passive, you have to take control and be responsible for your vision, and fight for it, because no one else will. Other people will help you, sure, but what’s that Alex Chilton lyric? “Everybody goes as far as they can, they don’t just care.”

Who is the most inspirational person you’ve met in the music industry?

I feel most inspired by friends of mine who have been in the music game long enough to know better but still have that same pure love for songs and records that they had in the beginning. Because this world will beat you down and rip your heart out and try to take the music from you after a while. Anyone who perseveres through this shit and remains enthusiastic about their art is sort of like a miracle to me.

You’ve been performing around town as DC Perez and mentioned you are producing an album and a music video, can you tell us about it and when it will be released?

All I feel at liberty to say currently is that there are some singles and a long-player on the way, and I am excited for this next year of our lord, two thousand and nineteen.

Your sets encompass two samplers and voice.  How did your style come about?

I first got into the sampler as an instrument when I started to see it as a trigger mechanism for the kinds of magic-sounding studio manipulations that I’ve always loved in records, rather than something to make shitty impersonations of Dilla beats on, or as a hypnotic loop sequencer like Panda Bear. It was important to me to treat it like an expressive instrument, to actually “play” the thing rather than just hit one button and fuck off down the road for a sandwich while the music goes on. I want to give an audience moments of sound unlike anything they’re used to, and when they look up on stage to try and figure out the origin of it, not have them see a laptop computer or something and be like “oh yep, mystery solved, lame.” It’s like a magician trying to sell a levitation trick. You can’t let the audience see the strings. The sampler is different because it’s just this self-contained little box of wonders. You can’t really “see the strings” with it, which gives it the power to astound and awe. And I love that I am only limited by my own imagination as to what sounds I can trigger or how I put it to use. It’s a blank canvas and a true practical extension of the freedom of the studio. There’s a great Wayne Coyne quote about how when people ask him what instrument he plays in The Flaming Lips, he says “I play the studio” or something along those lines. Well, with my samplers that’s exactly what I feel like I do. I play the studio live.

Besides your solo project, you play in Rick Moon’s band and recently performed with The Unknown Legends at Las Rosas. You also have a duo project with Rick Moon where you both sing and write songs. You are a very talented singer-songwriter, producer and multi-instrumentalist, what is your favorite part?

Yeah I’m playing a bunch of different roles in a bunch of different acts these days. I’ve been feeling the importance of being present and out there in the world more than I have in the past. There’s cool shit happening and I want to absorb and be a part of it all. With Rick it’s a little different than anything else though, because we’ve been friends and collaborators for almost 7 years now. We bring out the best in each other and lean on each other for support, always. The music we make and have made together is really special and we can’t wait to share it with the world.

But as far as my favorite part, I’d say that without a doubt I am a songwriter first and foremost. I enjoy all the other stuff but it’s all in service to building the world around a song. I consider myself a storyteller in that grand old tradition. It’s the only way I know how to express myself. I’d have been a novelist or a playwright in another life if not for music, but as it stands I’ll be telling my tale three minutes at a time until the day I die.