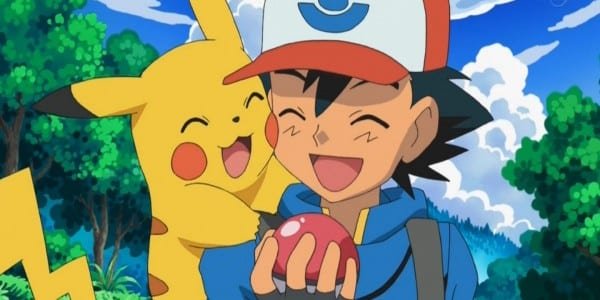 I’m not the target audience for Detective Pikachu

I needed three beers just to face the first live action movie based on the long running Pokémon franchise of video games, cartoons, etc. . The audience I saw it with, though, were another story. They happily wore light up Pikachu ears, applauded when the word “Pokémon” initially hit the screen, and gasped at the first glimpse of a pokéball (…I wonder if they cared when it never showed up again?). This movie’s for them. And to be fair, they did seem to dig it. But does it have any appeal to the uninitiated?

Detective Pikachu attempts mass appeal. On the surface. The trailers advertised an adventure in a neon-soaked city, a Blade Runner-lite setting that showed more effort than the words “Pokémon Movie” might typically engender. And casting hot-off-of-Deadpool-successes Ryan Reynolds as the sardonic voice of the main character (I should say, corporate icon) while still, somehow, staying true to the cute core of the monosyllabic Pikachu is a stroke of commercial genius. It’s a sad state of affairs when I praise “commercial genius”, but hey, that’s the way the cracker crumbles, or the way the pokéball rolls, I guess.

But there’s only so much you can do to make Pokémon more appealing. The core of the franchise doesn’t make much sense, especially in a feature film setting. Not that it really could, but the movie doesn’t even try to explain its world beyond the most basic concept of Man and Cute Monsters live together and kind of pair up for some reason and then sometimes fight tournament-style for some other reasons. Frankly, I was lost. Sometimes, when I mustered just enough gumption, I wondered, “Why are they fighting?”, “What are they trying to accomplish?”

Mostly I wasn’t tempted to figure out what was going on. I attempted a detailed plot synopsis, but it quickly devolved into gibberish. So I’ll just say this, a young human  teams up with his father’s amnesiac pocket monster partner  to investigate the father’s apparent murder, which leads to a conspiracy that made me think of Get Out, of all things. It all unfolds with lots of words like “MewTwo” (I looked up the spelling) and “Bulbasaur” (ditto) that have no meaning to me, undercut with noise and mostly unconvincing visual effects.

The pocket monsters do look cute in their 3-D incarnations, but is it just me or did they keep changing size from scene to scene, sometimes even from shot to shot? And the interactions between actors and special effects don’t pass muster either. When the lead humans carry their monsters around there’s no weight to them, it’s clear their arms are empty.

It was all beginning to give me a headache, so I leaned back and closed my eyes for a bit. Suddenly it hit me. It’s all happening again! Back in 1987, my mom had to take my brothers and me to Transformers: The Movie. Young me was enthralled by that film’s incessant light show, but when I looked over at my mom, she just sat there, eyes closed, rigid, waiting for the nightmare to be over. Now cut to 30+ years later and I’m in the exact same position, except I have no kids to blame for my predicament. I was not having a good night.

Detective Pikachu isn’t quite as crass as that Transformers movie, which basically amounted to a toy company screaming, “F*ck your old toys, buy these new ones instead!!!!” This Pokémon movie, at least, doesn’t demand you buy new toys; it just wants you to remember the old ones. Progress?

I’m guilty of loving things other people simply don’t get. There’s a lovingly framed Tron poster on the wall behind me as I write this, and crass or not, I still love that Transformers movie from the ‘80s. So I have no ill will toward the Pokémon superfans who populated this screening. Frankly, their enthusiasm buoyed me. They were charming. Well, except for the grown man dressed in a Pikachu onesie who faintly smelled of urine and had to sit right next to me. He needed a  shower. So, Pokémon fans, enjoy. The rest of us? Yeah, we really don’t “gotta catch ‘em all.”

Also releasing this weekend is Tolkien

This biopic about the  author who gifted us The Hobbit and The Lord of the Rings  is about as far away as you can get from the Pokemon commercia…err, movie I just reviewed. It’s quiet and gentle, for one, but I did find a tenuous connection between the two. Both films made me wonder how they would play to the uninitiated. Detective Pikachu is strictly for its fans, but what about Tolkien? How would it play to an audience who knew nothing about the film’s subject?

I didn’t expect much. The author’s estate condemned Tolkien a few weeks ago. Of course, they’re annoying cranks who hadn’t even seen the picture, and they were suspiciously mum when Peter Jackson mangled The Hobbit so profusely a few years ago. So I wasn’t that surprised when I ended up enjoying the movie.

For a film that has the fantasy author literally seeing dragons and other monsters on the battlefield while enduring WWI’s trench warfare, Tolkien is a lot subtler than it appears. The film is packed with references to characters and ideas that would later permeate his books. But what sets these references apart is how most are uncommented on. The kernels that led to J.R.R. Tolkien’s themes of nature vs industry are glimpsed in a simple, elegant dissolve from idyllic English countryside to the smokestacks and gray skies of Birmingham, where Tolkien had to move as a child. Later, a helpful soldier guides a sick  Tolkien through the trenches. His name is Sam, like the ever-loyal friend from Lord of the Rings. But his name is mentioned quickly, off hand. So quickly, I missed it; it had to be pointed out to me later.

The movie wisely doesn’t attempt to encapsulate the whole of Tolkien’s life in two hours, focusing  on his formative years, represented here as the building blocks to the themes of fellowship and love that so permeate his most famous works. The run time is devoted to Tolkien’s relationship with a trio of his closest friends whom he met in school and the love he found with his eventual wife, Edith. The friends hanging out, creating a club devoted to improving the world through the arts and Tolkien’s courtship of the intelligent, talented Edith create a kind of Dead Poets Society without the melodrama. And it’s all couched cleverly through a flashback structure that lends the film some urgency as Tolkien frantically searches for one of those friends on the frontlines of WWI.

The portrayals of likable characters, lovely visuals, and a moving score by Thomas Newman, makes Tolkien a very pleasant experience. Pleasant is not faint praise in my book, especially after sitting through loud piffle like Detective Pikachu the night before.

How will Tolkien play to an audience not already familiar with/interested in the author? I don’t know. Being a Tolkien devotee, I enjoyed picking up on all the references. All of those Easter Eggs, though, will probably mean nothing to the uninitiated. But if you’re in the mood for a humane and reserved film in a bucolic setting, there’s still a fair bit of enjoyment to be wrung out of Tolkien.