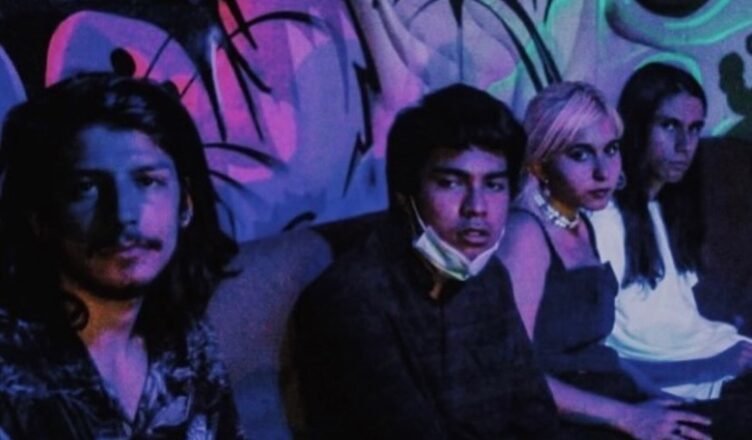 Deux Visages of Miami is bringing a refreshing sound to the stage while they work out  the ideal line up for their debut album. We caught their show on Sept 18th at Tea & Poets in South Miami. It was a solid sound and was closed out by one of my favorites, The Pixies’ “Where is My Mind”. Pretty appropriate for everyone these days. Here’s what’s they’ve  got to say.

Why the name Deux Visages?

Tyler Roberts-It was already settled on when I was asked to join. It’s hard for people to pronounce but we have fun with that.

Michael Del Valle-I don’t know, the name was decided before I joined and I thought it sounded neat so I didn’t bother suggesting another one.

Daphney- We meet up twice a week to practice and as for songs lyrically Michael an i write them. Musically, everyone chips in.

Tyler- Daphne or Michael usually bring an idea and write the lyrics and then we develop it together.

Michael-Usually either me or Daphne have some chords or a demo of a song we made and we share it with the band and try to get everyone to add their own twists to it.

If you could have a guest musician play with you, who would it be?

Daphney- I’ve been wanting to do a song with a saxophone so John Waugh from the 1975.

Tyler-Brett and Eddy from The Bicentennials I want them to play trumpet and sax respectively.

Michael-I don’t know, maybe Brett and Eddy, I’ve always been a big fan of ska and I love their style of playing sax and trumpet.

Tell us about the next album by Deux Visages. When can we expect it?

Daphney- Not much is in the works for an album right now. We’re just trying to come up with new things so hopefully it can maybe turn into an album.

Tyler- We’re spending more time in the garage jamming instead of just practicing the set. So hopefully new material soon. Not sure about a full length.

Michael- We really don’t have anything in mind, all I can say is that I’ve been listening to more dream-pop and Grandaddy, so I’d say those would probably be some influences during my songwriting process for any upcoming albums we have planned

Tyler- I still really like those first two Weezer records and that song they made for Jackass. Also Regina Spektor – Better. Not guilty pleasures, cause I don’t believe in that, but just not what I lead with in conversation.

Michael- I drink too much soda.

Tyler- I’m from Georgia. Moved to Florida in 5th grade. Not sure how much I love Miami, but it is the only place like this.

Does Deux Visages have a video coming out?

Daphney- Nope, but it would be cool one day!

Tyler-Nothing in the works for now.

Daphney- Britney Spears Oops I Did It Again

Tyler- A bit fuzzy on that. But probably Mesmerize by System of A Down or RHCP self titled.

Michael- I can’t remember but it was either an Arcade Fire (Funeral) record or a Car Seat Headrest album (Twin Fantasy).

Anything else you want to tell me or provide to include in this.

Tyler- So much happens in between “I wanna make music” and that being tangible through shows and final recordings. So thank you for listening.