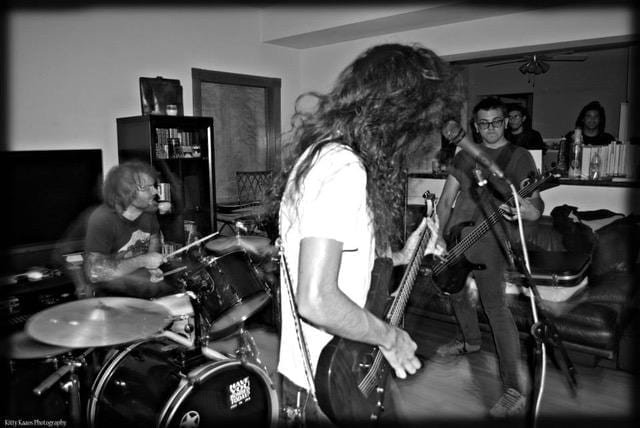 If you thrive in chaos, Devalued is for you. With a name that “never has and never will“ mean anything to them, for rabid followers, it means one hell of a show. While I certainly recommend seeing them live, I don’t recommend you stand directly at the front. That is, if you are firmly against the possibility of being smashed in the head by a crowd-surfing boot. For many of us, though, that is our happy place.

At least that was my experience, standing by a pillar for relative safety, against the stage at Miami’s Churchill’s Pub. The risk is nothing short of worth it, which I can say wholeheartedly. Sludge is a genre that pulls hard on my heart-strings, and Devalued’s often sludgy rifts pull me in.

Self-defined as “fake jazz,” which may sometimes be the case, as untraceable tunes present as wild and abrupt. They’re often referred to by people who know better than I, as D-beat. I’d call it metal with sludgy, slamming, and oft hardcore vibes. If ever it feels jazzy, it’s because chaotic chords come at you faster than you can fool with, in strands you can’t predict.

Composed of fallen angels Nico Cordoba on vocals and guitar, and Matt Stoyka on drums, the band can’t remember when they formed, a fact lost to history. But, with social media presence extending as far back as 2011, you can confidently say they’ve paid their dues.

Having had some big shows planned this year, including Gainesville’s 352 Fest, they are – like the rest of us – sadly on a forced hiatus. Thanks, COVID-19, way to ruin absolutely everything. That said, the band does play their fair share of shows. Previously playing alongside the devious dolls of Bleeth, Ian Ichimoe, and Jillian Carter, the line-up is always commanding.

Once our current viral overlords have loosened their hold on society, make sure to catch them live and ask about the history of genetically modified fruit. Until then, check out their recordings here on Bandcamp.