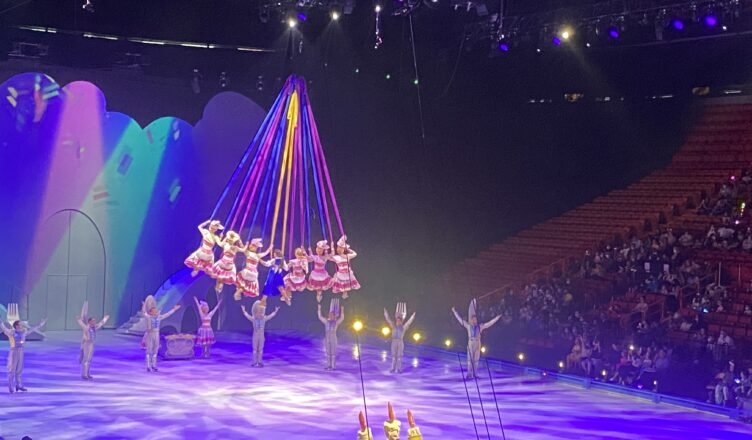 Last March before the world ended, I was going to take my then six year-old-daughter to see Disney on Ice.

But then of course the world ended.

Flash forward a year and a half and I learned Disney on Ice is back in town. I know it’s not a good idea during a pandemic to be around a lot of people. Especially when I just recovered from a nasty case of COVID myself. But it had been five years since I took my daughter to see Peppa Pig. At eight she’s now at the cusp of being too old to go to kid friendly activities. There’s only two or (if the gods smile on me) three years before she instead wants me to take her to whatever tween idol TikTok foists upon us.

And so just like it was 2019 the family spent a Saturday afternoon in a massive arena seeking entertainment. It had only been a year and a half since I last stepped into the venue to review a Billie Eilish concert.  How the world had changed. The most obvious way was the arena was no longer named after an airline, but was now sponsored by a cryptocurrency exchange. But also now the loudspeaker announced, “Please keep your mask on at all times unless you are eating or drinking and keep six feet apart from anyone else.”

This being Miami no one followed the instructions.

We got there early. Since most people in our fair city run on Miami time, they must have been shocked to learn the show started on Disney (or maybe Orlando?) time. At 2:45, fifteen whole minutes before the 3:00 start time Tinkerbell was already on the ice skating around. She was kind of the opener. The true show started promptly at three when the ice in the center of the stage filled up with skaters. There were guys on one wheel hoverboards, ladies on trampolines and of course tons of ice skaters. The Disney characters began popping out one by one with the biggest cheers reserved for Minnie Mouse.

A family of four sat in front of us all wearing gigantic Minnie Mouse ear headbands. This was the considerate kind of crew that probably attended the Spielberg movie Lincoln with giant stovepipe hats on their heads. Fortunately the row behind us was empty. We jumped back with Mama keeping a worried eye that the true seat holders might show up any second.

But the show went on. We were thrilled (and I’m not being sarcastic) by the Cirque du Soleil style stunts that were attempted on the ice. Skaters were twirled into the air at impossible heights many times wearing hefty costumes.  Moana moved around the ice on a boat. We oohed as skaters pushed twenty foot Coco themed Day of the Dead figures. We aahed as Ariel from The Little Mermaid  was hoisted as though she was a ragdoll by her skating partner. More impressive though than any of the athletic feats were how quickly the cast changed their costumes.

But most impressive was how my daughter sat through the whole show. When I took her to Peppa Pig as a three year old she wanted to get up every other minute. Now she was transfixed on the spectacle while munching on her fourteen dollar sno-cone and fifteen dollar popcorn.  She didn’t even get up during intermission because she didn’t want to miss anything. She kept trying to guess who the next character was going to be that showed up, eagerly awaiting Elsa from Frozen to pop up.

Finally the Frozen theme began and then randomly the proper seatholders popped up Miami style. An hour and a half into a two hour show. But I had noticed an empty bloc of seats, rows behind us when I went to the bathroom. And so we could pretend to social distance while watching Elsa skate to “Let It Go”.

And then came the grand finale. All the characters popped up. It was impressive to see how large the ensemble was. My daughter clapped loud and hard at the end. We left the arena with smiles under our masked faces and sanitizer on our hands.