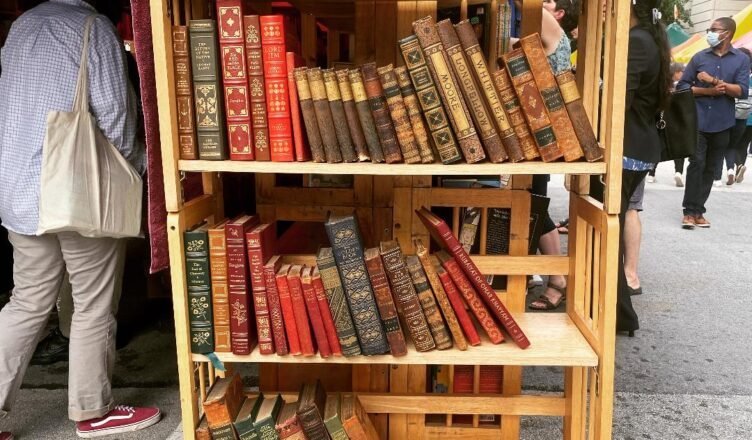 It is hard to fathom how many words have been printed and bound until you have attended the Miami Book Fair. For three days books line the streets, up and down  NE 2nd avenue, and NE 4th Street.

I’d attended the book fair many times as a book lover and a member of the media. This however was my first time working as a vendor. Under the Jitney Books tent I was one of those desperate souls eager to push books on a receptive audience.

Friday was a rough start. It rained so hard it had me thinking mother nature was not a fan of literacy. Even though we were under a tent I had to cover all the books as best we could under a tarp. There was a tiny leak dripping down from the roof, but even more discouraging was no one was at the fair. As the minutes of torrential rain turned into hours I got to know the author who was sharing the tent with us.

The author and his lady friend had driven all the way from Tampa to exhibit their book. His book was about how men should be more like women. But strangely the cover of the book along with the poster he had displayed on the table featured a shirtless pic of the author and his chiseled abs. After an hour or two of no passer-bys, a homeless seeming woman seemed very interested. “Are there pictures in the book?” she asked eager for some more beefcake.

Hours of rain passed. I was disappointed, but I felt even worse for the buff guy next to me. He had driven five hours and the one day he rented the booth for was completely rained out. Somehow he didn’t seem the slightest bit bothered. I told myself I should be more like him, not let bad fortune get me so down.

But then a man walked by and asked my tentmate, “What are you doing in my booth?”

Turned out the Tampa couple were book squatters. They found an empty spot and took it as their own hoping to sell their words.

That was a pretty amusing distraction from the rain. But it kept coming down. I killed the hours talking with the legit proprietor of the booth. He was a poet and children’s book author, but of most interest to me he played football at Florida State during the glory years I was a student there.  The journalist and sports fan in me peppered him with questions about Bobby Bowden and whether my alma matter made under the table payments and before I knew it the day was a wash. I took the bus home after six hours without a single book sold.

Saturday would be a better day I told myself. I brought my wife and daughter. My daughter has grown up going to the Book Fair every November (with the exception of our covid year 2020), looking forward to all the children’s activities with great delight. They strolled the premises, taking advantage of the art projects and free kids books that were handed out while I manned the tent. In three hours I sold three books.

After lunch my eight year old was keen to try to improve sales. She stacked the piles of books as orderly as humanly possible. She and her Mom drew pictures on the brown bags which were meant to house purchased books. My daughter’s face lit up when a trio of women each bought a book. She could have stayed there all day. But when the rest of the Jitney Books crew showed up we took our leave. I was convinced I was a jinx and perhaps if I left they would have better luck finding these books homes.

Sunday would be a better day I told myself. I got there bright and early. And the weather had turned. There were hints of sunshine and I greeted every fairgoer with a smile and a “how are you doing this morning?” More often than not they tried to avoid eye contact. And after a few hours without a sale I did what every successful salesperson warns novices not to do, I started taking it personally.

Being a writer I am used to rejection. I’ve spent my entire adult life having my writing turned down by more agents, publishers, and producers than you could imagine existing. Any success has seemed almost like a miracle. But I’ve learned to delude myself that is a “them” problem not a “me” problem. To see the disinterest in person was harder. And when I realized of the seven books I sold the previous day, none were written by me got me. I was down enough that I might or might not have texted the Jitney Books publisher, “If you want sales try to get here soon. Miami hates me. People would rather eat a steaming pile of vomit than buy a book from me.”

I kicked myself as I do from time to time. Writing a book is by definition a narcissistic act. We only have so much time on this earth. To expect someone to devote a fraction of that lifespan reading the thoughts you put into words,  is the height of hubris.

No, not quite. Expecting someone to pay for your writing, that’s another level of ridiculousness.

But then something funny happened, a woman bought a couple books including one I wrote. Then another customer bought another of my books. And in an instant my mood changed. I understand intellectually how shallow it is to depend on other people’s purchasing power to find validation. Perhaps if it was refrigerators or insurance I was selling, I could be more detached. But I’m selling little pieces of my soul.