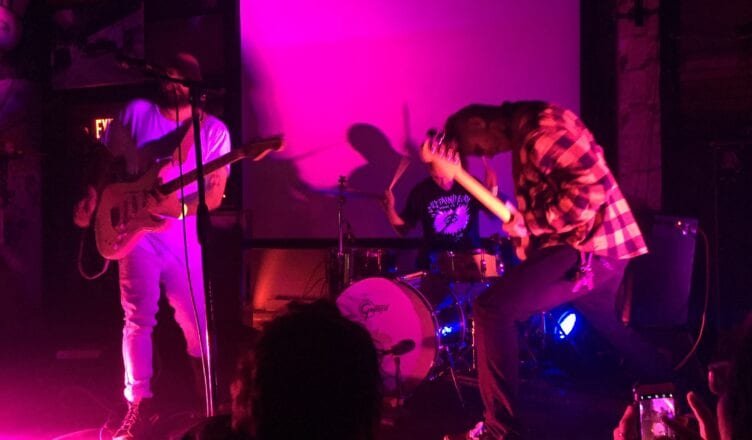 I know better than to get in the way of Gregorio Alvarez. A powerhouse in all his endeavors, the guitarist and co-vocalist of the Miami-based band, Dogheat, puts on a performance that is pure energy. In standing by the stage, you’re risking your facial bones. The man comes equipped with a special brand of performative violence.

Watching him play with bandmates Robert Wilson Brantley III and brother Eddy Alvarez, it’s impossible to shake the sensation that you might lose a couple teeth to the kiss of his flailing guitar. Some shows have splash zones. Dogheat has crash zones.

The band puts on sets that feel so incredibly intense, they overthrow. With band darling Eddy on drums, Greg on aforementioned guitar and vocals, and towering showman Brantley on vocals and bass, it’s an impossible set to ignore.

Once the band occupies the stage, crowds are quickly drawn. Greg is screaming. Robert is screaming. We’re all screaming, and it’s a great time.

In addition to a truly killer stage presence, Dogheat jams absolutely bang. Slamming and screeching and whining and whirring, the music is overlaid with lyrics as shout from the groups duel vocalists.

The result of this delightful conglomeration is an incredibly entertaining and lovable noise-rock sound with some, dare-I-say, hardcore feels.

Although the band’s music is best enjoyed live, the crew is expected to soon have a demo tape available. The four-song tape will make available the music for those who are unable to make it to local events. Or for those who just yearn to take some Dogheat home, something for which a person could hardly be blamed.