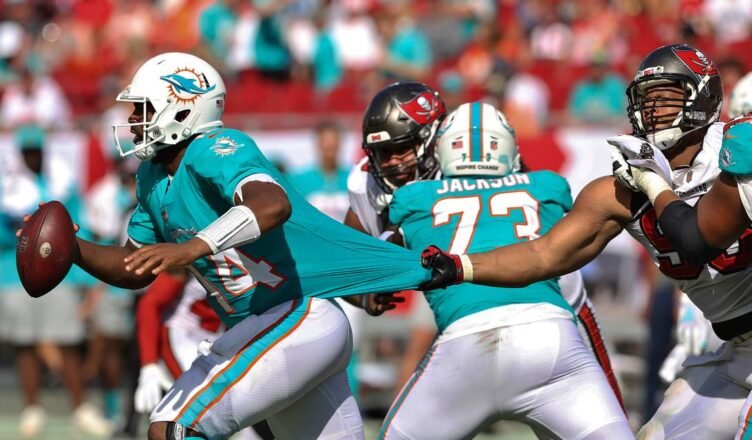 The Buffalo Bills and Tampa Bay Buccaneers are the best teams in their respective conferences and are on course for an amazing Super Bowl matchup. The Miami Dolphins have played each team and lost by a combined score of 80-17. Neither game was remotely close to being competitive. Dominated in all phases and severely out-coached Miami has significantly regressed, bringing into question the competency of Chris Grier and Brian Flores.

Three years into the rebuild there’s no obvious differences between this regime and Adam Gase’s. Reports are beginning to surface that Flores has lost the locker room, particularly his defense.

Based on statistics, Miami has the second-worst offense in the league and the third-worst defense in the league. The eye test doesn’t offer any relief either. Poor schemes and lackadaisical effort reared its ugly head especially in the second half of this past week. There’s an obvious feeling of discontent among several players.

And coach Flores simply has no answers as the questions begin to swallow him. Instead of attacking the root causes of these issues Flores immediately deflects blame citing “execution” as the primary culprit. Flores and Grier demand execution from players but lack any accountability when it comes to their own failures. The national media, once on their side, have also noticed and now shower injured Tua Tagovailoa with empathy and praise.

Fortunately for Dolphin fans Tua Tagovailoa is returning, but I fear the damage has already been done. The mind and psyche of Miami has been broken and other teams around the league are taking notice. The Dolphins are the equivalent to an injured dog licking its wounds all while still being vulnerable to attack. The little remaining hope rests on Tua Tagovailoa’s small shoulder pads and he needs to be near perfect to save Miami’s season. If the Dolphins lose to the winless Jaguars that may spell the end of this Flores-Grier era. I’ll have a fresh update in a few weeks, when we’ll see if Tua can  save us.