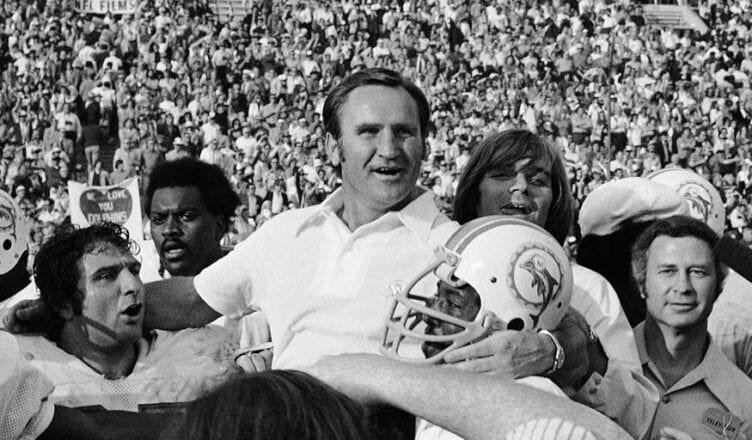 In this era of celebrity death worship, the passing of Don Shula received a muted response. Nobody expected Shules to get the Kobe Bryant treatment,  but there should be more love for the NFL’s all time winningest coach.

You’d think the accolades for the man who led the Miami Dolphins and Baltimore Colts for 33 years with only two losing seasons would ring louder than the honking horns on the expressway that bears his name. You’d figure the tributes for the coach who led the 1972 Miami Dolphins to the NFL’s only perfect season ever would be more glowing than the room lighting at Don Shula Steakhouse.  At the very least you’d think Don Shula would get a shout out from Jim Carrey for committing to the below physical comedy in Ace Ventura: Pet Detective.

The obvious reason for the relative media silence is that it has been 25 years since Shula coached a game. Anyone under 30 would have no recollection of  Don Shula outside of his name being mentioned every football season when the last undefeated team suffered a loss.

It also probably didn’t help that Shula’s excellence was a quiet one. He didn’t have the charisma or wit we expect from our leaders of men. The only memorable quote regarding Shula was when Bum Phillips said unintelligibly, “He can take his’n and beat your’n and take your’n and beat his’n.”

But it seems like someone who was better at something than any other person who ever lived should be reaping more praise.

Or maybe that feeling is retroactive guilt for the way Dolfans pushed Shula out of the job that should have been his for as long as he wanted it. In 1995 after yet another dispiriting early playoff loss to the Buffalo Bills, Miami fans were calling for Shula’s head. It had been 22 years since he won a Super Bowl and 11 years since he took a team to a Super Bowl. The disrespect was captured for posterity by the below Sports Illustrated cover. 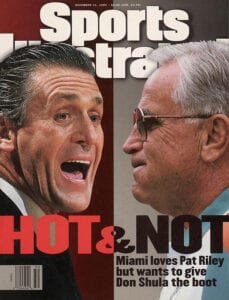 At the end of the ’95 season Dolphins owner Wayne Huizinga listened to his customers and decided there had to be a change. At the very least, Huizinga said, Shula would need to shake up his staff.  Shula announced he’d rather resign with integrity than fire any of his assistants.

Don Shula never took another football job. Meanwhile the Dolphins have wallowed in mediocrity, with only three seasons over the next twenty-five surpassing the winning percentage that Shula’s team averaged year in and year out.

Barely a week after Dolphins’ fans happiest moment in decades in drafting Tua Tagovailoa, we’re left burying the team patriarch. For those who don’t believe in coincidence and try to make sense out of life and sport, one could suggest a 90 year-old Shula could finally drop his mortal coil now that his team seemed in good hands.

R.I.P. Don Shula. Apologies from Miami for not appreciating what it had in you, the most successful professional football coach who ever lived.