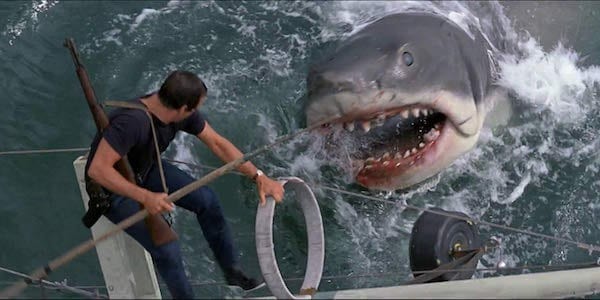 It was one of those clickbait headlines that if you ever dip into South Florida’s waters you had to read. Last week my news feed was filled with attention grabbing fodder like “12-Foot, 998-Pound Great White Shark Tracked To South Florida Waters.” and “A 12-foot-long great white shark is swimming just off Miami“. All the stories were accompanied with a picture of massive, gruesome sharks that are the stuff nightmares are made of.

A further read showed the shark wasn’t actually seen anywhere near our beaches. A tracker tagged on the shark showed the great white to be a couple miles south of Bill Baggs Park on Key Biscayne.

But the mere whisper of a shark is enough to make the heart race. For the past couple years a few sharks have found themselves way too comfortable swimming near the shores of South Beach. I’ve heard some classify them as lemon sharks, others as nurse sharks.  It’s kind of cool to see the domino effect of bathers getting out of the water as the shark slowly swims in their direction. It’s also a bit terrifying to be in the water alone and see the shark coming towards your vantage point.

But how much do we have to be afraid of? Every year worldwide there are only about 66 unprovoked shark attacks per year (there are also 30 provoked attacks per year, but if you’re going to poke a shark while scuba diving consider it a stupidity tax). In the United States since the year 2000  there have only been 20 fatalities due to shark attacks. To put those numbers in perspective up to five million people in the U.S. are attacked by dogs each year, and each year between 30 to 50 people are killed.

Obviously there’s extenuating circumstances to these statistics. People are around dogs a lot more often than they’re in the ocean. But if you’re a gambler playing by the odds, you are thirty times more likely to have a dog bite you into the grave than a shark related funeral arrangement.

If Cujo  was half as good a movie as Jaws, would dogs strike as much terror in our hearts as sharks do?